Greg Gianforte Of Montana...A Perfect Example Of What One Of The Morons Of The Traitorous GOP Looks Like

Background:
1. Maddow Slams Bill O Reilly AND Fox News For Lying For Ratings
2. Fox News Has The Highest Ratings As A Fake News Site... Even The President Listens to Them... Yet The Media Says Nothing.

I have long argued that there are only TWO types of Republicans. Traitors and Morons. This is an incident of a moron who doesn't know that Fox News is a treasonous lying channel designed around Nazi style propaganda. 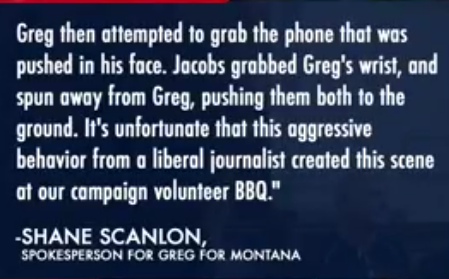 Liberals have been an attack point of the GOP & Fox News for while as per their bullying tactics, that often gets people killed;

24-HOUR NAZI PARTY PEOPLEClip 1/24/11Jon challenges his staff to find someone on Megyn Kelly's show making a Nazi comparison before he finishes a home perm kit.

If Greg was smart he would know that he is in a party of traitors and would seek Koch Brother money the way all these traitors do (if he has treasonous inclinations). Instead he thinks he believes the truth that he hears about the situation of the country today from a bunch of traitors (who shouldn't even be allowed to get away with ONE lies much less hours of lies as is the case today with our useless and incompetent media... as far as Journalism is concerned, they are great at public relations, which is useless for the country and its advancement. Hannity is right. Journalism is dead... and Hannity is the perfect example of it ).

I have several posts on this, here is the best one thus far; 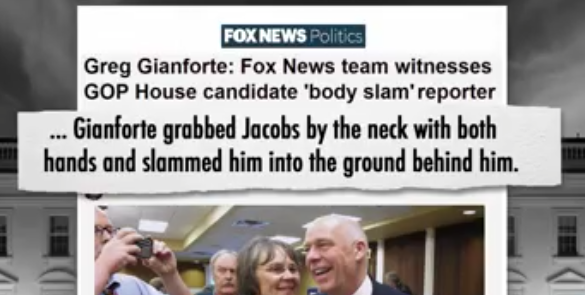 This guy is a reporter who was questioned by a Sheriff. The GOP guy probably thought Fox News would back him up as to him its probably some sort of war against liberals (which makes sense since Fox News is hardcore attacking the rest of the news and the rest of the news is taking it like their little bitch, so its natural to assume that Fox News is telling the truth and the rest of the media (IN AMERICA) is not confronting them as they know they will just get exposed as traitors... THUS no scandal of Fox News & GOP lies (till Trump, but still alot of context is left out). Of course, alot of "reporters" of Fox News know they are a channel of bullshit and treason and so they are surprised when they discover a GOP politician doesn't know it, which is always amusing.

Here is the Vine Daily Show put up with 50 Fox News lies in 6 seconds (with a link below so you to read them all if you don't want to tap the images over and over).

Politifact: The fact-checks behind 'The Daily Show's' 50 Fox news 'lies' (click link to view the full 50 lies Daily Show exposed & that Politifact double checked and even they agree these were all lies)

1. "In July 2010 the government said small businesses -- 60 percent -- will lose their health care, 45 percent of big business and a large percentage of individual health."
Sean Hannity, Nov. 11, 2013
False
Read more of the Fox News lies on the Politifact site.

Other reports on this incident;


This incident is the perfect example of what happens when the high and mighty media channels ignore the highest rated traitor media channel as if it doesn't exists and doesn't influence the population and elections. (calling them crazy is not enough, you have to go after them for their lies and treason you cowards!)

Lessons In Propaganda From Fox News


Lessons In Politics From The Republicans