Background:
1. The Daily Show Proves That Fox News Is Fake News
2. Fox News Helps Dictators Part 2 OR Fox News IS Fake News
3. Post-Truth Is The Word Of The Year But It's Just A Repeat Of "Truthiness" From 2006! Have We Entered An Echo Chamber Of Lies So Big We Can't Even Remember Exposing It?
4. National Sexual Assault Awareness & Prevention Month: As Bill O Reilly Gets Caught Up In Sex Scandals We Take A Look At Rape In The Military & Thier Republican Defenders
5. Fox News Has The Highest Ratings As A Fake News Site... Even The President Listens to Them... Yet The Media Says Nothing.

Generally when a Republican lies they try and hide it. With Trump we find no such inhibition. Sometimes I think he read my post on "Fox News helps dictators"and decided to see if he could make it work for him. In any case, alternative facts are simply lies. Fox News is simply lies. A Trump Administration is the ultimate culmination of over a decade of Fox News talking points.

Adapting to Donald Trump's Lies: The Daily Show: Even after Donald Trump's mendacious 2016 presidential campaign, the media is still grappling with how to report on the now-president-elect's blatant falsehoods. 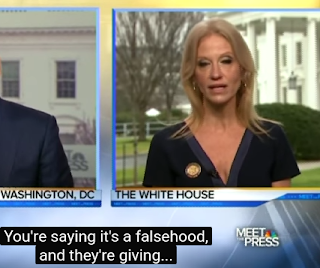 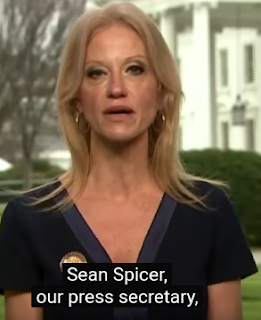 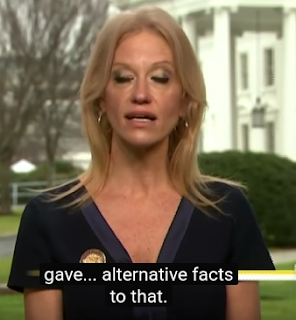 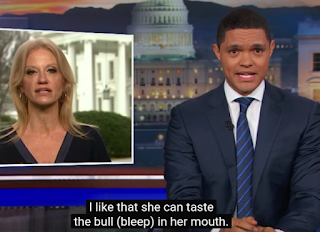 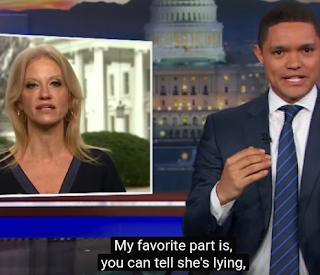 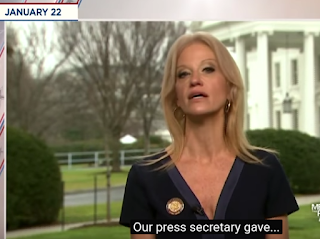 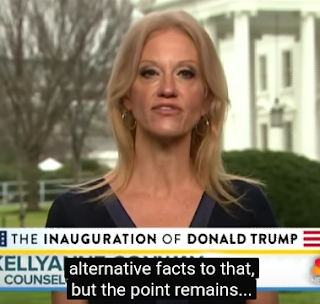 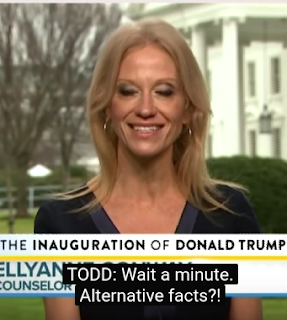 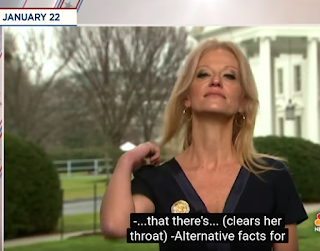 Kellyanne Conway created a media frenzy after using the phrase "alternative facts," but Trevor Noah said it isn't hard to tell when President Donald Trump's counselor is spinning the truth.
"We've talked a lot about the falsehoods that Donald Trump and his team made over the weekend," the host of Comedy Central's "The Daily Show" said on Monday's episode. "But on Sunday, we learned that Trump's senior adviser Kellyanne Conway has a different term for falsehood."
It all started when White House press secretary Sean Spicer refuted reports of the low attendance at Trump's inauguration, saying, "This is the largest audience to ever witness an inauguration. Period."
Ridership numbers furnished by the Washington Metropolitan Area Transit Authority and photographic evidence show Spicer's statement is false. But Conway appeared on "Meet the Press" on Sunday and said Spicer wasn't lying, but instead presenting "alternative facts." 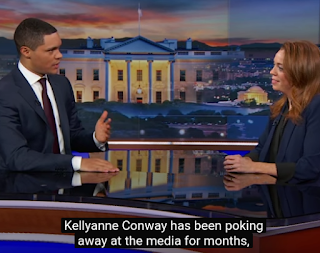 Kellyanne Conway: Sometimes Trump Lies Because He Doesn't Know the Truth, Okay?
Michael Brooks is filling in for Sam Seder on the Majority Report today. In this clip, Kellyanne Conway appears on "Morning Joe" to defend Donald Trump calling Lester Holt a Democrat. Lots of dodging and weaving, the usual.

WATCH: 5 reasons why “alternative facts” are dangerous If Kellyanne Conway and the Trump administration have their way, reality will be a quaint relic of the past

The science of “blue lies”: There’s a reason Trump supporters embrace his alternative facts Blue lies are a very particular form of deception that can build solidarity within groups

The "Not the White House Correspondents' Dinner" celebrated journalism while taking shots at CNN, Fox and Trump


Taxes are higher than ever! Whites face discrimination! How do we combat alternative reality? Conservatives' false beliefs about race and economics are related — understanding how is crucial to defeating them

“Alternative facts” are bad enough, but we’re facing something far more serious: alternative worldviews in which up is down, future is past and all bets are off. Simply reacting to the most outrageous lies is not strategically smart enough. We need to work more seriously on a more comprehensive response — even as we need to become more sensitive to how far the inversions of reality have spread, and what ends they serve.
For example, the day before taxes were due, NPR reported on an IPSOS poll that found that a 44 percent plurality of Americans mistakenly believed that the richer pay more now than they did in 1980, when the top marginal income tax rate was 70 percent —compared to 39.6 percent today. Among Republicans, 52 percent believe this false picture, compared to just 28 percent who don’t.
Other important examples are the  wildly exaggerated perceptions of anti-white discrimination or anti-Christian discrimination. Or Trump’s repeated assertions (at the Republican convention, on the campaign trail and as president) that the crime rate today is historically high, because of some combination of Barack Obama’s policies, illegal immigration and the nonexistent “Ferguson effect.”


Best Explanation: Alternative Facts: How Do We Determine What Is True?

Conway's statement was not based on a scientific perspective, but rather on a much older tradition of deciding what is true: the argument from authority.
It was the Enlightenment that gave us science as we know it today. The scientific method was an active creation of men – and a few stalwart women – in the aftermath of the Thirty Years' War who were intent on upending what at the time was viewed as a venerable method of judging between competing claims to truth: Whatever the people in power said was true. That an individual saw or thought or reasoned something different did not matter. The men who created science believed argument from authority caused the Thirty Years' War, and they developed science so it could never happen again.
By contrast, Press Secretary Sean Spicer's statement on the inauguration shows argument from authority in its clearest form: "This was the largest audience to ever witness an inauguration, period." His attitude isn't just anti-fact, it's anti-science.

Are we entering a post-Enlightenment world?

We seem to have raised the argument from authority to a new level of acceptance, culminating in this election's cascade of "false news" and "alternative facts." I believe it is the culmination of a long retreat from the scientific perspective on truth.
When I was a new professor in the early 1990s teaching human evolution, I found myself pitted against creationists who believed God created humans exactly as we are today, without any process of evolution. Theirs was an argument from authority; specifically, the authority of the first two chapters of Genesis. I did not recognize that argument at the time, and tried to counter it with scientific facts.
I realize now that my approach did not work because we were not arguing about the scientifically accepted facts. We were using different methods of judging what is and what is not a fact. This debate had been active since the Scopes "Monkey Trial" in 1925, where high school science teacher John Scopes was arrested and tried for teaching human evolution in a public school. But in the 1980s, the debate became a tool in the political arsenal of the religious right. Their growing power in American politics rekindled a longstanding American tradition of anti-intellectualism and unease with the scientific perspective.
Empirical data carry little weight against an argument from authority. And the reverse is true too.
In 2010 I became embroiled in a debate within the American Anthropological Association about their revised mission statement, which had thrown into question the role of science in anthropology. All references to "science" had been removed from the mission statement. I argued that anthropology had been led astray by postmodernism and needed to reestablish science as its guide.
Source of the attack on science on the right may be due to the oil money they get through our system of legalized bribery that climate change data would oppose because focusing on fossil fuels indicates a sort of cultural and civilization suicide. Thus the medias climate change charade panels mocked by John Oliver;