The Puny Obama Era Environmental Measures Made No Difference To The Coastal Flooding Scientists Are Expecting In The Future, i.e. Trump Gutting Those Laws Made No Real Difference To The Fact That Millions Are Scheduled To Die By Flooding Within 50 Years! 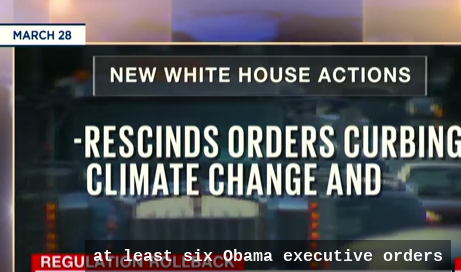 Well, the coast of Florida was scheduled to be gone with or without Obamas executive actions (we need a larger more countrywide movement to alter the future and not some executive order). This areas in Florida are scheduled to go offline (with huge civilian casualties) within 50 years... 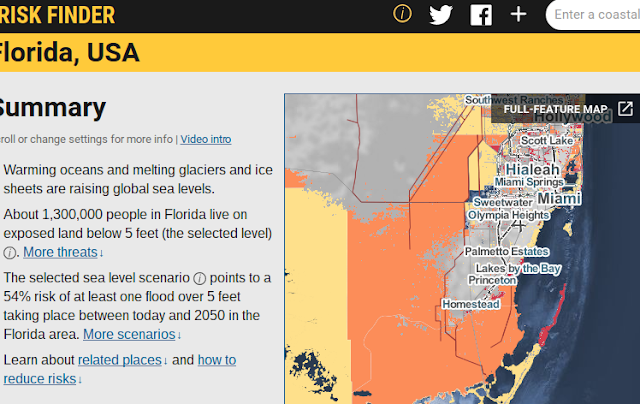 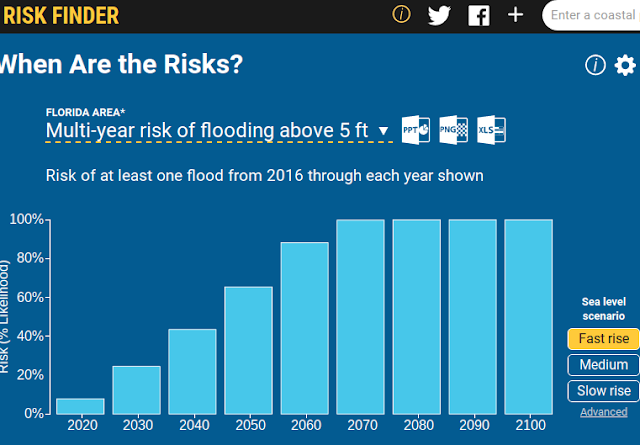 Here is a report confirming this...

Business Insider: Too late: 400 cities in America, including Miami and New Orleans, will likely be submerged by rising sea waters

For millions of Americans, climate change has already passed the point of no return: no matter what action the world tries to take, their cities will be submerged by rising sea levels.
Scientists have identified 414 towns and cities in the United States that are guaranteed to eventually be underwater, regardless of how much humans decrease their carbon emissions.
"Historic carbon emissions have already locked in enough future sea level rise to submerge most of the homes in each of several hundred American towns and cities," said a statement on the website of Climate Central, the group who conducted the study.
Published this week in the Proceedings of the National Academy of Sciences journal, the doomsday list has on it the names of major population centres, including Miami and New Orleans.
At least 40 per cent of the people said to be living on potentially affected land live in Florida, America's ‘Sunshine State’.
Low, flat, and a peninsula, much of the state, including the land that Miami is built on is formed of “porous limestone”, Benjamin Strauss, the lead author of the study told the Huffington post.
“The bedrock underneath Miami is a lot like Swiss cheese," he said. "Water can just go through it and so building levees is not going to be effective in South Florida," he said.

Here is something Texas is definitely not prepared for, and the flood is coming... 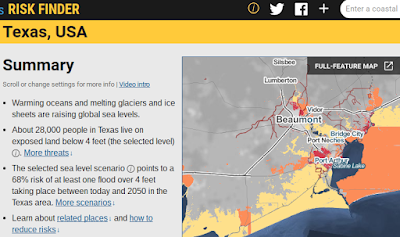 In fact, its guaranteed that residents of hat area will have been evacuated or be dead by 2070... 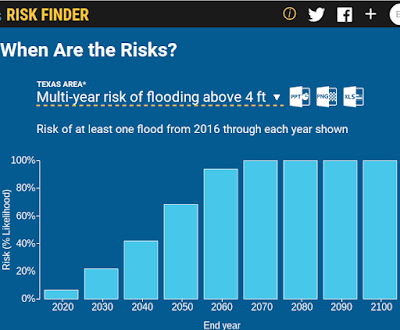 The problem is that we have no plan for the future because of this reason;

In recent years, a variety of Republican policymakers have identified rising sea levels as one of those things people just aren’t supposed to talk about.
In 2012, for example, GOP officials in North Carolina tried to prohibit a state-appointed science panel from relying on the scientific evidence related to sea levels. Around the same time, Republican state lawmakers in Virginia commissioned a study on climate change and the state’s Eastern shore, but “sea level rise” was to be omitted. The GOP sponsor of the study pointed to “sea level rise” as an example of “liberal code words.”

Not only do we have no plan to deal with the upcoming ocean level and coastal city (& thus "immigration") crisis, we ... well, half of us, ... won't even believe years of climate change data that almost all scientists have confirmed. Next 100 years is bad. Next 200 years could spell the end of civilization as we know it.

I covered what we can expect form the weather in the future in this post: Ocean Warming Data Provides Us With A Hint Of What We Have In Store 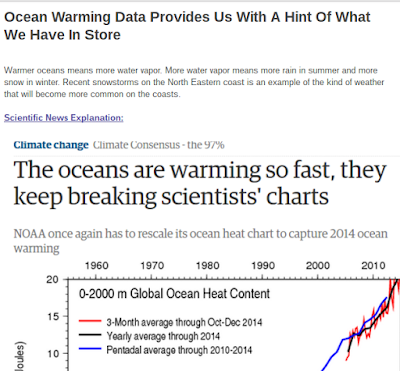 The sort of weather changes (& death toll + expenses) we are expecting over the next 70 years around the country (these are the sort of news reports that will become more common and scary over the upcoming years)...


THE FACTS ABOUT SEA LEVEL RISE: Global warming has raised global sea level about 8 inches since 1880, and the rate of rise is accelerating. Rising seas dramatically increase the odds of damaging floods from storm surges. A Climate Central analysis finds the odds of “century” or worse floods occurring by 2030 are on track to double or more, over widespread areas of the U.S. These increases threaten an enormous amount of damage. Across the country, nearly 5 million people live in 2.6 million homes at less than 4 feet above high tide — a level lower than the century flood line for most locations analyzed. And compounding this risk, scientists expect roughly 2 to 7 more feet of sea level rise this century — a lot depending upon how much more heat-trapping pollution humanity puts into the sky.

Hermine brings dangerous rip currents to East Coast Hermine is now a post-tropical cyclone, but the threat of coastal flooding and dangerous surf is still very real. NBC’s Morgan Radford reports from Chatham, Massachusetts on the threatening riptides and how long they should expect to last.


Note - Any plan we think about in the future, for the future, will have to take into account ideas included in the following links;