Analysis: The FBI & Media Won Trump The Election & I Called It First

Background: How The FBI & Media Won Trump The Elections


This post basically outlines proofs that the FBI won Trump the election and many seemed to think so despite it not being an issue in the media that helped make this a reality. I'm guessing the protesters would get angry? In any case, I called it on twitter and then posted about it (above) after Hillary seemed to agree or come to the same conclusion herself. I'm still right no matter what appears in the media. Russia may have tried and/or succeeded in hacking the election but that interference was not what won Trump the election.

MSNBC - Maddow: Trump thanks the FBI director accused of helping his campaign


There was a White House reception yesterday to thank law enforcement officers and first responders who worked on Donald Trump’s inauguration, and the new president seemed especially eager to thank one person in particular. The Washington Post reported:

FBI Director James B. Comey, who infuriated Democrats during the campaign drama over Hillary Clinton’s email, got a pat on the back Sunday from President Trump. […]
“He’s become more famous than me,” Trump said to those ringing the room as Comey strode in his direction. The two men shook hands and as Comey leaned in toward Trump, the president patted him on the back a few times.

If you watch the clip closely, it seems as if Trump may have blown Comey a kiss before encouraging him to cross the room for a presidential embrace.
It wasn’t surprising that Trump’s principal concern was on Comey’s “fame” – the new president seems to prefer to have headlines to himself – but the scene was nevertheless an awkward one.
Congressional Democrats, pollsters, and political scientists agree that were it not for the FBI director’s suspect intervention in the 2016 campaign, Trump would almost certainly not have won the election. Subsequent information from Comey has only enraged Dems further.

Summary/Explanation of what happened;

Daily Show To CNN, MSNBC & Fox News: I Wish You Were Drunk Cause That Would Explain Your Coverage


They even covered up the Iraq war...


So when the FBI came out and started up a narrative of an investigation, the media jumped...

How The FBI & Media Won Trump The Elections


Of course, you should keep in mind that all this time media has been giving Trump free publicity cause he's interesting/controversial...

A new report from Harvard Kennedy School’s Shorenstein Center on Media, Politics and Public Policy analyzes news coverage of the 2016 presidential candidates in the year leading up to the primaries. This crucial period, labeled “the invisible primary” by political scientists, is when candidates try to lay the groundwork for a winning campaign—with media exposure often playing a make or break role.

The report shows that during the year 2015, major news outlets covered Donald Trump in a way that was unusual given his low initial polling numbers—a high volume of media coverage preceded Trump’s rise in the polls. Trump’s coverage was positive in tone—he received far more “good press” than “bad press.” The volume and tone of the coverage helped propel Trump to the top of Republican polls.

The Democratic race in 2015 received less than half the coverage of the Republican race. Bernie Sanders’ campaign was largely ignored in the early months but, as it began to get coverage, it was overwhelmingly positive in tone. Sanders’ coverage in 2015 was the most favorable of any of the top candidates, Republican or Democratic. For her part, Hillary Clinton had by far the most negative coverage of any candidate. In 11 of the 12 months, her “bad news” outpaced her “good news,” usually by a wide margin, contributing to the increase in her unfavorable poll ratings in 2015.

The Shorenstein Center study is based on an analysis of thousands of news statements by CBS, Fox, the Los Angeles Times, NBC, The New York Times, USA Today, The Wall Street Journal, and The Washington Post. The study’s data were provided by Media Tenor, a firm that specializes in the content analysis of news coverage.

Confirmed: Network Newscasts Were All-Trump, All The Time In 2015 The media dumps on democracy with exceptionally bad election coverage.

Though that's not complete until you take into account this information;

Bernie Sanders On How Corporate Media Is A Threat to Democracy (With An Explanation On How & Why They Covered Up Bernie ... AND How They Continue To Cover-up Their Coverup)

So between the FBI and the media's bullsh*t we had the chaos necessary to elect Trump (thanks to you both... though if he brings out 9/11 he may turn out to be our best President yet so maybe I shouldn't speak so soon? Of course, if he doesn't bring out the truth about 9/11 (through an independent and transparent investigation) then Trump will be the worst President the United States has ever had (& yes, I'm including white supremacists like Nixon and  Presidents such as Andrew Jackson... who I clearly should never have posted about)).

Here is a summary from my past post of left out info in the media;

Here is an article from Politico NOTING that previous email investigation HAD reduced Hillary's polls numbers (i.e. we had historical precedent AND the fact of needing several days for the polls to reflect the FBI's interference in the election). 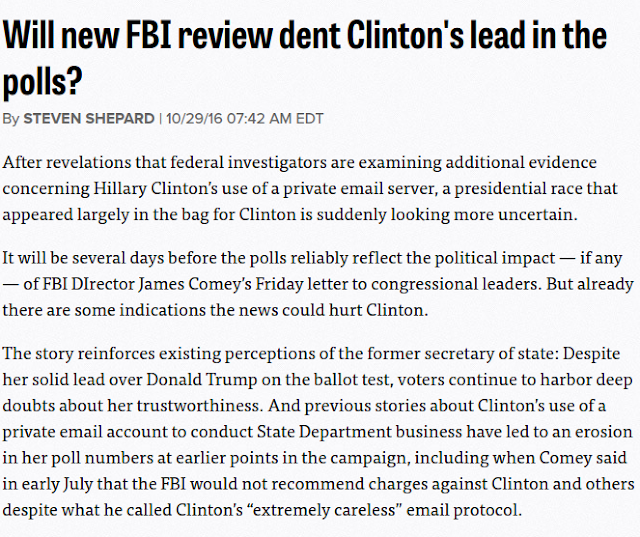 If you take into account newspapers NOT in the American media fold of misinformation for profit (synergy) then we get the idea that there was an idea floating around that media stories and stories created by the FBI IN the media could have an effect on public opinion as well (such as boost voter turnout in high-fear areas, which is what appears to have happened, i.e. the scare tactic through a fake scandal worked!)
Here we see Hillary's poll number go down yet everyone seems to believe the FBI investigation has nothing to do with it! How did they figure that out? Ask a bunch of scared voters?

The Guardian: 'The FBI is Trumpland': anti-Clinton atmosphere spurred leaking, sources sayHighly unfavorable view of Hillary Clinton intensified after James Comey’s decision not to recommend an indictment over her use of a private email server


More proofs that the FBI and the media's fake news echo chamber won Trump the Presidency more than anything else;


Media Discover Due Caution When It Comes To Reporting About Trump But Where Was That Prudence On Clinton Email Reporting?

Note: The Russian hacking stories are about a foreign power and it's possible influence here. Ultimately it was the FBI investigation that brought down the Democrats. Of course, it's a good sign that Russian hacking wasn't able to sway the Nation.