A Radical Experiment In Empathy: The Case To Reclassify America As A Terrorist State (Have You Noticed That A Great Deal Of American Foreign Policy Can Be Seen As A White Supremacist Cleansing/Genocide?)

Background:
1. Mass Murder (War Crimes) By The Pentagon & Bush Administration (A Collection/List)
2. Rachel Maddow On How Right-Wing Extremist Attacks Are Ignored By The Media In Favor Of Jihadist Violence
3. A List of Right Wing Christian (White Male) Killings/Mass-Murders & A Comprehensive List Of Mass Murders In The United States
4. GOP & Fox News Are Basically Terrorist Organizations (Based On Rhetoric & Effects Of That Rhetoric)
5. Dylann Roof's Racist Manifesto That Sounds Remarkably Like GOP & Fox News Talking Points
6. A Sampling Of Biblical Scripture For The Non-Fact Based Media Commentator (i.e. where the terrorist tendencies seem to come from)
7. Calling White Terrorists "Mentally Insane" Doesn't Change What They Are (Just Ask The Terrified People Who Were Their Victims)
8. If Fake News Is Domestic Terrorism (& It Is, I.E. "Propaganda") Then Fox News Are Domestic Terrorists
9. News In America Is Dead: Fox News IS Fake News... It Has Had It's Own "Pizzagate" MANY Many Times! Yet No One Calls Em Out!

This is more of a thought experiment/proof along the lines of this mental experiment for non-emphatic/robotic/blind/heartless/uncompassionate humans;

A Radical Experiment In Empathy:

People throw around phrases like 'One mans freedom fighter is another man's terrorist' or something like that without thinking too much about it. Generally when people use it. it's in the context of 'the rebels are being called terrorists by the Government but are really freedom fighters'. For example; Reagan called all the death squads which killed hundreds of thousands of people, destabilizing all the country's South of us, "Rebels"... even when they were overthrowing Democracies and installing dictatorships. Given this weird double standard I thought I would look a little more closely at how the rest of the world may be perceiving us by bringing out information that our politicians with their fine words and noble phrases would rather not talk about (and media is more than willing to oblige them on a continuous basis like we are some Communist country while praising themselves).

I thought I would step away from the cultural fiction marketed in the media and look at our history in context of the Genocidal approach of the Christian scriptures. Here is what I discovered. (i.e. US foreign policy only makes sense if you look at it as a white supremacist destabilization & cleansing program. Afterall, what is "Manifest Destiny" but the belief that white people are destined to own all land & not colored people?).

If you put our foreign policy in context of human morality and justice then we are clearly a nation of terrorists (using our cultures own method of classifying such things). All we have to do is take a cursory look at our history to notice that we kill people, especially colored people, with alarming regularity and in numbers that make us look like psychotic killers and murders more than anything else. If it was colored people or Muslims doing this we would most certainly call them a terrorist state and a culture and religion of terrorists and we would be right (as long as we left out the fact that the Government was making these Genocidal decisions and using propaganda to accomplish this... which is what we do to other countries like we were a 16th century Spanish Inquisition State). Note: What really helps ISIS recruit is our mass murder polices around the world, our history of doing so with our passion to destabilize country's and our coverup of our own attack on our people to push for a permanent terrorist war for profit and (& judging from Fox News & GOP politicians) pleasure.

OK. Lets start the expose of America as a terrorist Nation;

If you look at our history, as we would see others if they did the same to us, we would look something like this...

Lets see, there were the terrorist wars against the colored people who lived in America first  … 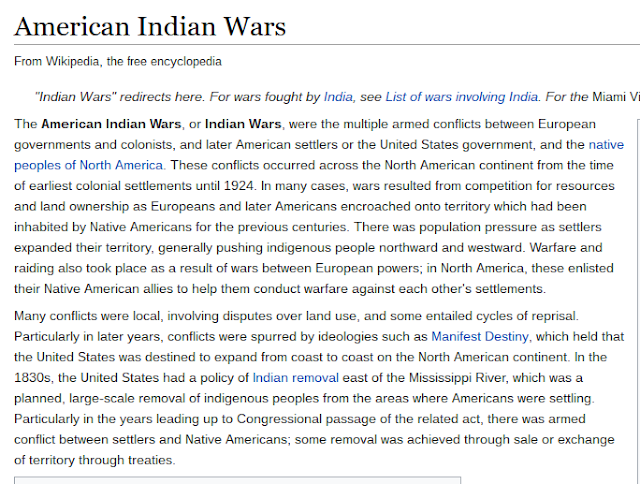 & then there was the terrorist campaign against the Philippino people  … 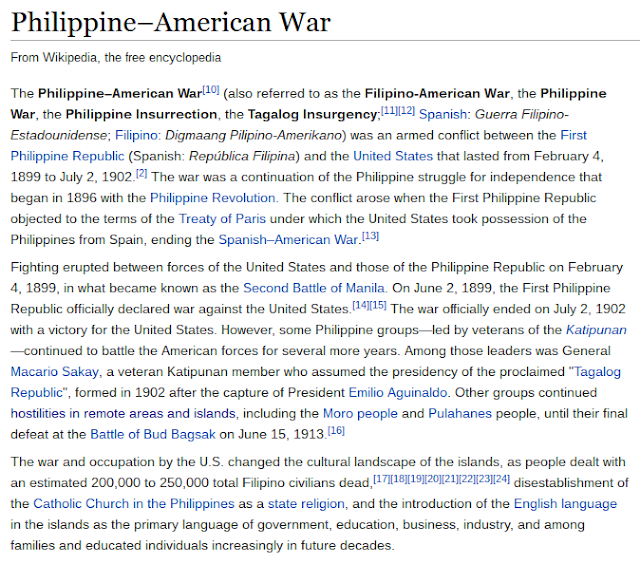 Of course, this was just the beginning of American terrorist campaigns. …


September 11th has now become synonymous with the tragic events of two years ago. It brings forth images of the death and destruction here in the US: the towers crumbling, people fleeing through streets or jumping from buildings, desperate to learn anything about their missing loved ones. But for others around the world this date evokes different images and memories of terror. Today on Democracy Now!, we will spend the hour looking at September 11ths throughout history.
We’ll go back to September 11, 1973 the day Chile’s democratically-elected President Salvador Allende died in a CIA-backed military coup; to September 11, 1977 the day anti-apartheid leader Stephen Biko was being driven to Pretoria where he would die a day later on a prison floor after being beaten by South African police; to September 11, 1990 when Guatemalan anthropologist Myrna Mack was murdered by US-backed death squads; to September 11, 1971 to the Attica Prison uprising that saw New York State Troopers kill 39 men and wound 88 others.


There was the Mexican-American war (probably filled with unrecorded terrorism)  … 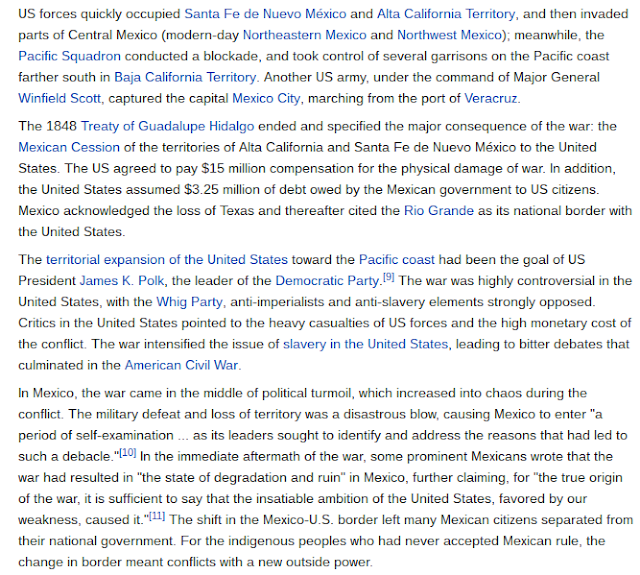 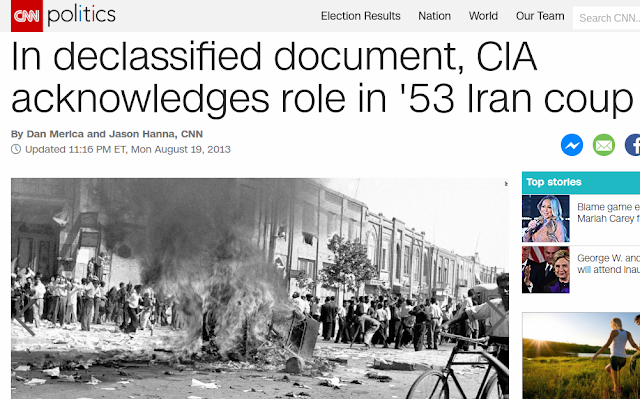 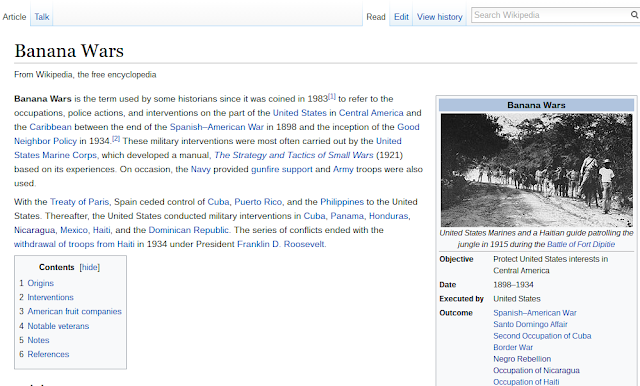 
& then there are the terrorist bombings/genocide/cleansings with everyone's favorite war criminal Henry Kissinger ... 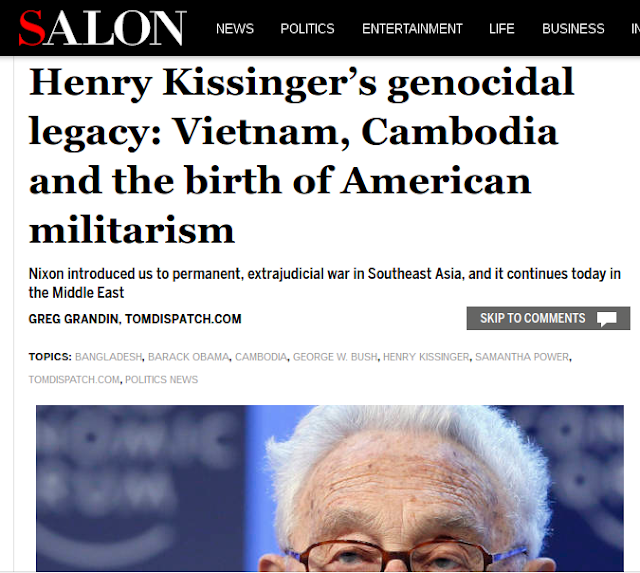 One of the results of this constant warfare (and probably an effect of being in a major current war rather than just secret actions) is probably why so many shootings take place, i.e. the effect on culture of constant war is the breakdown of the social structure of that country. Of course, this perception is tilted by the media with an interesting bias which also encourages war and promoted misunderstanding by pushing lies and false comparisons;

For example; Media never uses "terrorist" for anyone but Muslims! … 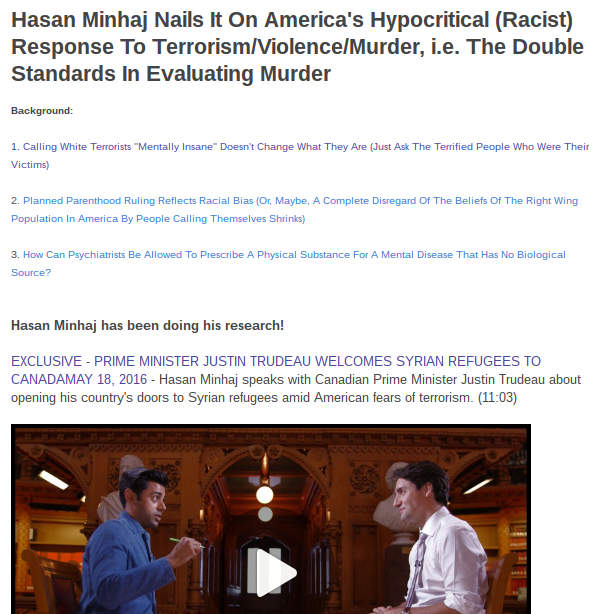 Since the media are committed to portraying Muslims (colored people of a different religion) as terrorists while any white terrorist as "mentally insane" (and even covering up a possible white people bombings to keep up the illusion they want to market to the people) and the media has been covering up one thing after another and covering up their coverups, then clearly they are part of the same network of media propaganda (i.e. MSNBC is really just Fox News in liberal disguise)

Now lets look at our most recent "War on Terror" where we went and terrorized multiple nations using lies marketed through the media like a Communist/Nazi Nation;

Dick Cheney explains how Iraq would fall apart if we invaded in 1994: 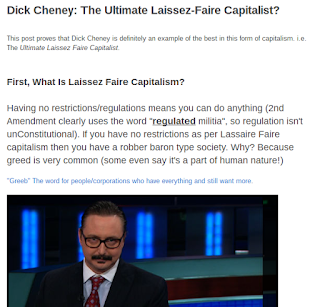 Halliburton got $7B in no-bid Iraq contracts
During Vice President Dick Cheney's tenure as its chief executive, the Halliburton Corporation altered its accounting policies so it could report as revenue more than $100 million in disputed costs on big construction projects, public filings by the company show. Halliburton did not disclose the change to investors for over a year.
Vice President Dick Cheney’s stock options in Halliburton rose from $241,498 in 2004 to over $8 million in 2005, an increase of more than 3,000 percent, as Halliburton continues to rake in billions of dollars from no-bid/no-audit government contracts.

So the GOP, following a standard Nixonian political strategy, i.e.

... & the Pentagon, launched a terrorist campaign against Iraq 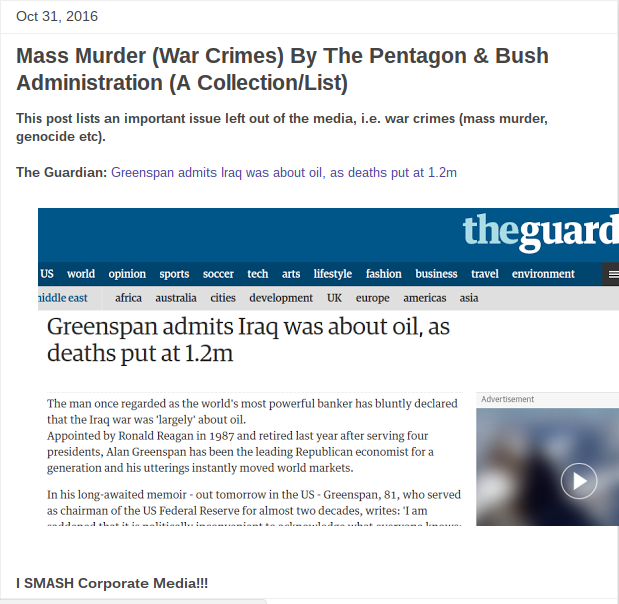 One immediate effect of this terrorist campaign was retaliation (& using retaliation is the right word - or "blowback" -, as you will see down below, because the earliest attacks seem to be of the west on the Muslim world UNLESS we go back to the Ottoman empire of the age of the Crusades... which was a talking point to Bush era Republicans); 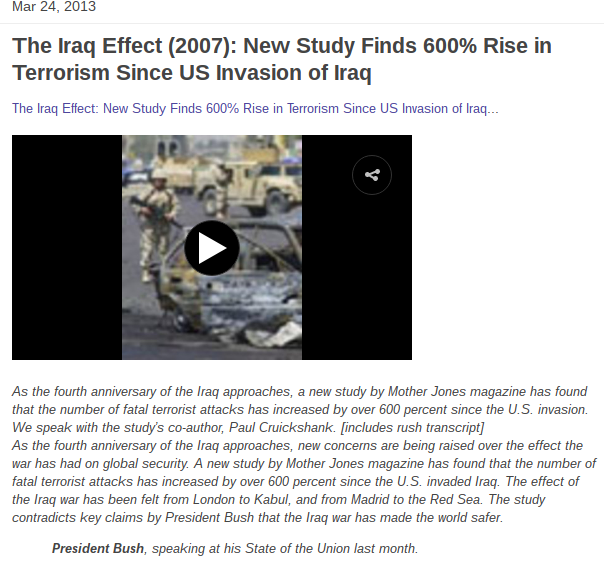 Side Note: How Do US Terrorists Get Away? Ans: Media Help … 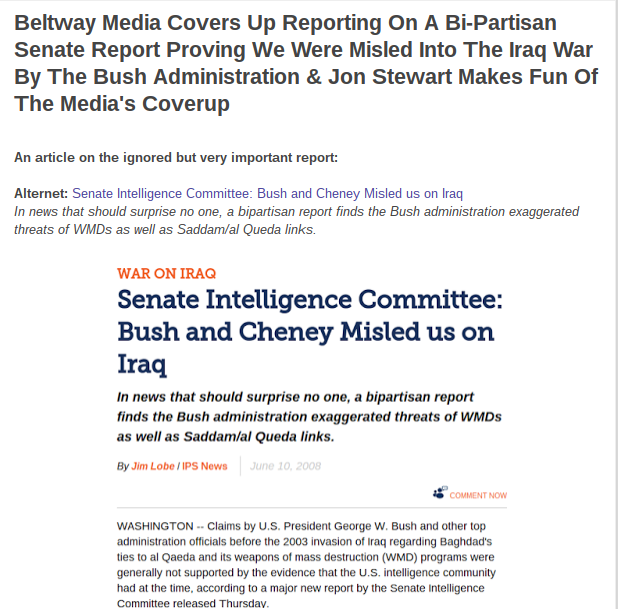 Media works together when it comes to protecting US Terrorists … 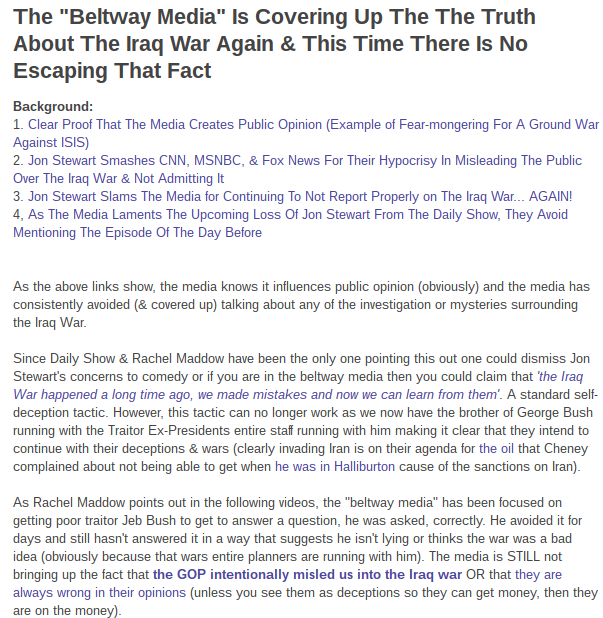 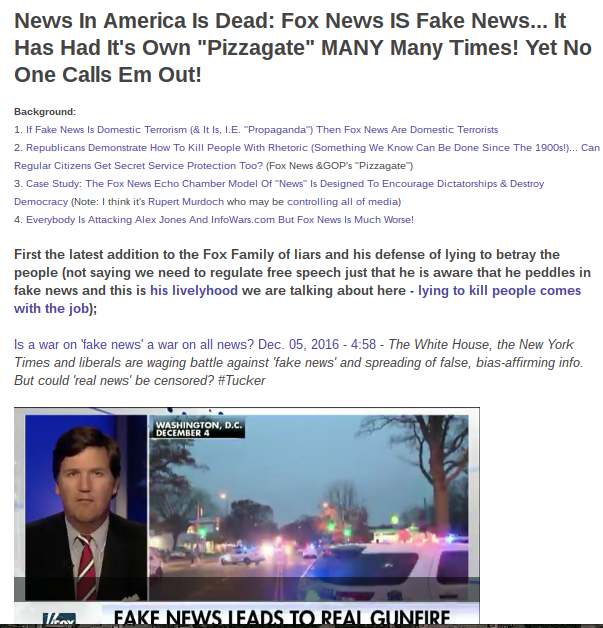 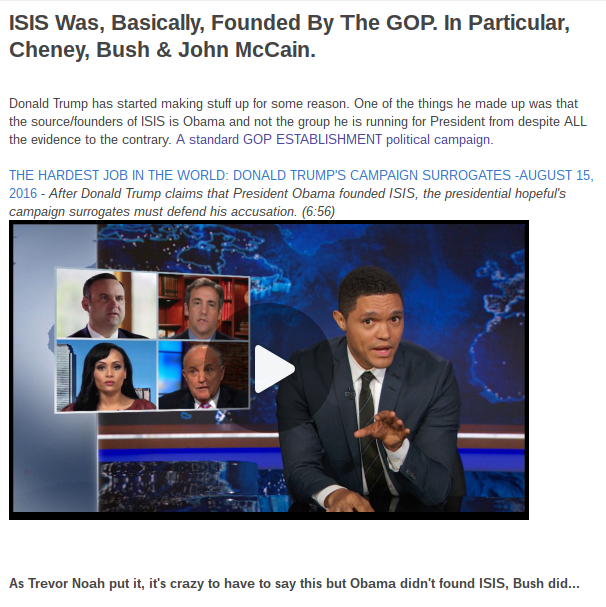 When you really look at the history behind ISIS, the farce of the media become even more apparent;


In other words, if you look at our history as we would see others if they did the same to us, would look something like this...

Add the following and frankly, not relabeling America a terrorist nation makes all of the news and political propaganda sound like it came straight out of an Orwell book;