Lessons In Propaganda From Fox News 2 - Lie Loudly And Often... And The People Will Eventually Believe You

“If you tell a big enough lie and tell it frequently enough, it will be believed.” ― Adolf Hitler


SHUTSTORM 2013: AMERICA SITS ON ITS BALLS - BIAS ON BULLS**T MOUNTAIN OCTOBER 3, 2013 - Could there be a higher octane fuel for the Fox News false outrage exploitation engine than wheelchair-bound World War II veterans? (6:19)

The 50 lies by Fox News listed by Jon Stewart in the above video has been double checked by Politifact as true.

MOMENT OF ZEN - IN DEFENSE OF FOX NEWS JUNE 23, 2015 - After President Obama calls out Fox News on the podcast "WTF with Marc Maron," network anchor Megyn Kelly issues a rebuttal. (0:23)

After the story made the rounds on right-wing media sites, Bill O’Reilly reported on the post during the November 15 edition of Fox News’ The O’Reilly Factor. O’Reilly similarly mischaracterized the statement made by Bunting in a conversation with Washington Examiner contributor Lisa Boothe, and the segment culminated in calls for his dismissal. From The O’Reilly Factor:

BILL O'REILLY (HOST): If you are a student, and you're applying to George Mason University, you have to write an essay. I mean, you have to tell the people about yourself. And if you hold a certain belief system, maybe that will be included in your essay. And one of the admissions deciders is telling you, “if you don't agree with me you are a worthless piece of you know what?” Come on? How can he possibly do his job?
LISA BOOTHE: He can't. And that's the big problem here. And this is why he should be let go. Because his job is supposed to be objective with the admissions process. And clearly he is anything but. And, I think the university needs to take it one step further and do a review of the applications process to ensure that no students and previous applicants -- that they were not discriminated against based off of their political ideology or Christian beliefs. Because the statement that this individual made on his Facebook post was related to gay marriage, and was actually -- cited something from the Southern Poverty Law Center, which has labeled groups like the Family Research Council hate groups.
O'REILLY: So, well, I want to get this right. So, you would fire him outright? He’s done, if you were the chancellor?
BOOTHE: Yes. And I think he needs emotional therapy puppies. Maybe he needs to attend a cry-in. But yeah, I think he should be let go.

Weather Channel Meteorologist Calls Out Breitbart: “Please Stop Using Our Video to Mislead Americans” On Climate Change Atmospheric Scientist Kait Parker: “To all my fellow scientists out there: Let’s make the facts louder than the opinions”

The Weather Channel criticized Breitbart.com for falsely claiming that global warming temperatures have “plunged,” describing a Breitbart article as “a prime example of cherrying picking” data and pointing out that Breitbart denied the findings of “thousands of researchers and scientific societies.”
In a video accompanying a December 6 article, Weather Channel meteorologist Kait Parker explained to Breitbart, “Science doesn’t care about your opinion. Cherry-picking and twisting the facts will not change the future, nor the fact -- not opinion -- that the earth is warming. ”
The Weather Channel video and article roundly debunked the false and misleading claims in the November 30 Breitbart article by James Delingpole. In response to Delingpole’s claim that "[g]lobal land temperatures have plummeted by one degree Celsius since the middle of this year,” Parker pointed out that Delingpole had cherry-picked one set of data, adding in the video that “land temperatures aren’t an appropriate measure” and that the temperature decline disappears when you also account for sea surface temperatures. Delingpole also cited the science editor of the Global Warming Policy Foundation, David Whitehouse, to claim that “without the El Niño (and the so-called ‘Pacific Blob’) 2014-2016 would not have been record warm years," yet Parker noted in the video that even if you “take out the El Nino spike in temperatures, 2015 and 2016 still come in as the warmest years on record,” as Carbon Brief has shown. Finally, Parker debunked Delingpole’s claim that a likely drop in global temperatures in 2017 is evidence against global warming, writing: “There is nothing unusual about a drop in global surface temperatures when going from El Niño to La Nina. These ups and downs occur on top of the long-term warming trend that remains when the El Niño and La Niña signals are removed.”
Parker also lamented the U.S. House Science Committee’s endorsement of the Breitbart article on Twitter and concluded her video with a helpful suggestion for Breitbart and a rallying cry for fellow scientists: “So next time you’re thinking about publishing a cherry-picked article, try consulting a scientist first, and to all my fellow scientists out there: Let’s make the facts louder than the opinions.”

A Case Study On Why Fox News Can’t Be Trusted: Bret Baier Edition

Fox News anchor Bret Baier’s seemingly bombshell reporting about the Clinton Foundation and a "likely" indictment regarding Democratic presidential nominee Hillary Clinton's use of a private email server, which was based on two unknown sources, collapsed within days when the anchor admitted he’d made a “mistake.”
By the time Baier walked back his comments, his claims had already been parroted by Republican presidential nominee Donald Trump, Fox hosts and correspondents, right-wing blogs, and some mainstream outlets like The Hill.
While Donald Trump’s own campaign manager Kellyanne Conway admitted that the story was wrong, she celebrated that “voters are hearing it” and "the damage is done." Therein lies the massive problem.
Baier made more than a "mistake." And if you need more evidence that Baier's Friday apology wasn't enough, look no further than Fox & Friends Saturday, where discredited conservative journalist Ed Klein touted dubious reporting to suggest that Clinton will likely face an indictment if she’s elected president. What’s more, Fox News senior political analyst Brit Hume tweeted on Saturday morning that “Fox News stands by Bret Baier's key finding: that the FBI [investigation] of the Clinton [Foundation] is open & active.”
Following the backlash from Bret Baier’s false smear about an impending Clinton indictment, and the doubling down from Fox News, I’m urging Fox News to take these additional steps to correct this miscoverage as soon as possible:
1) Fox News should fully retract Baier’s initial report. While Baier issued an apology that effectively walked back his three major claims, Fox should fully retract the report.
2) Fox News should devote the same amount of time to running Baier’s apology as it did to his faulty reporting. The network spent more than two hours of coverage and devoted at least 41 segments over a 24-hour period to Baier’s faulty reporting. This amounts to nearly 12 percent of the network’s total live airtime.
3) Fox News should re-air its correction on Baier’s show, Special Report, and on The O’Reilly Factor, the network’s most watched show. Baier has yet to apologize on his own show. After years of convincing its viewers that all other news outlets are biased, there stands the very real possibility that the only place Fox viewers are likely to see Baier's apology is if it airs on Fox News. If the network will not devote equal time to the correction as it gave to Baier’s faulty reporting, then it should ensure the correction is seen by as many viewers as possible.

Click here for a comprehensive listing and analysis of Fox News lies and misleading information by media matters. 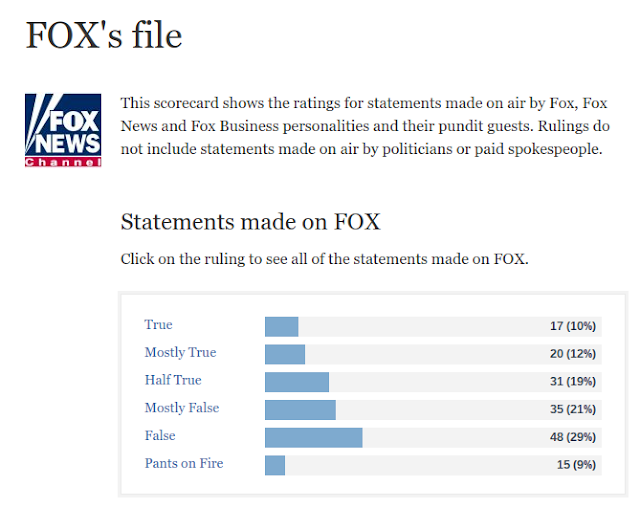