A Collection Of Bill O Reilly's Lies From Punditfact

Background:
1. A Collection Of Fox News Lies - Part 1
2. News In America Is Dead: Fox News IS Fake News... It Has Had It's Own "Pizzagate" MANY Many Times! Yet No One Calls Em Out!

Punditfact is a new outfit that analyses statements and looks for facts in them. It's unfortunate that they are new cause Bill O Reilly has been lying for a very very long time. It would be nice if they could go through his career and point out all his lies. Anyways, I am working with what I have. This is just meant as an intro to Bill's perceptual lie machine.

This is a standard Megyn Kelly type lie, i.e. 'I looked it up and found it to be inaccurate'. Unfortunately no one is tracking this stuff since Jon Stewart retired.

Huffington Post made a much larger collection which you can view here; Bill O’Reilly’s Right-Wing Buffoonery: A Brief Catalog

(I made an extract down below to scan through) 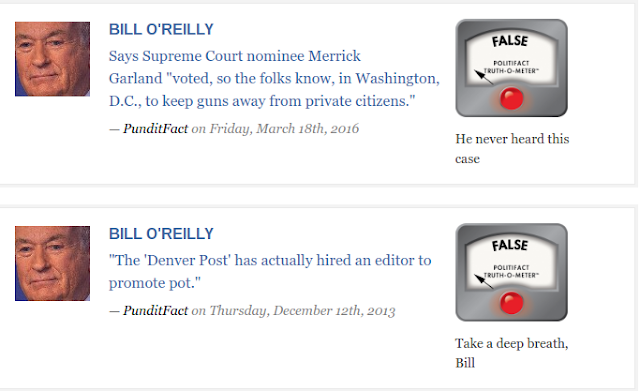 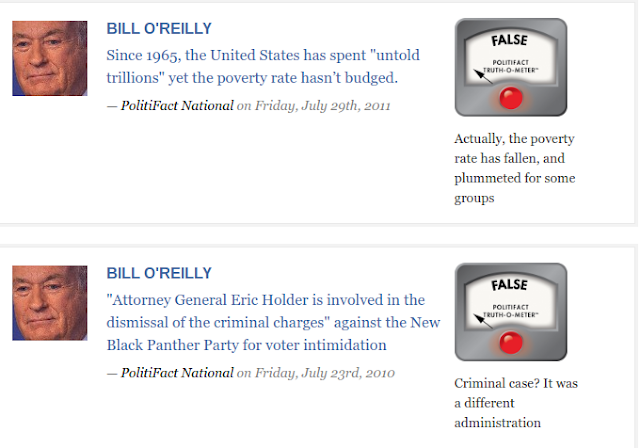 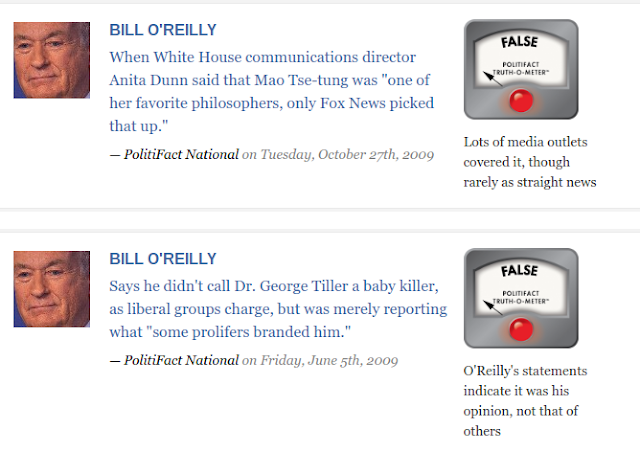 Extract from a Huffington post article with more details of this interesting lie by Pizzagate type killer, Bill O Reilly; 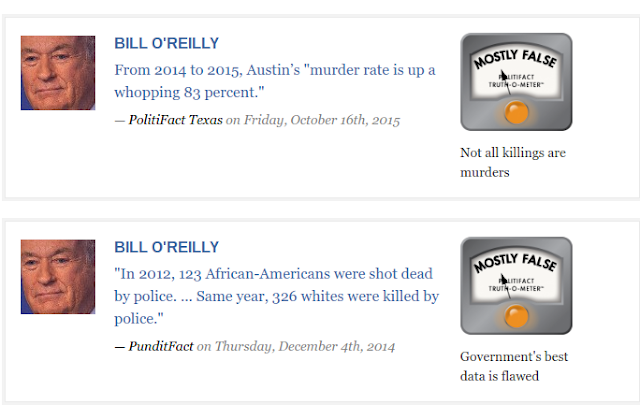 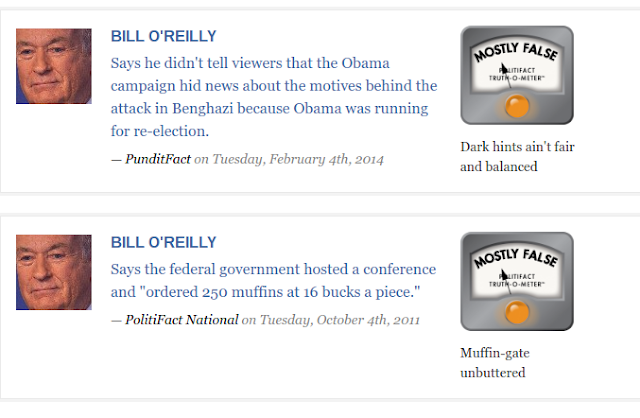 Some of Bill's lies when the country needed truth the most (his lies helped Dick Cheney and Halliburton make a ton of money off oil in Iraq for which plans had been drawn up BEFORE 9/11 and these lies also helped kill 4000+ soldiers without their families getting any of the oil money they fought and died for, not to mention 1.2 million innocent people in Iraq);

More Examples of O’Reilly’s Lies and Distortions
• O’Reilly falsely claimed Bush didn’t oppose 9-11 Commission. O’Reilly defended President George W. Bush from a Kerry-Edwards ‘04 TV ad highlighting Bush’s opposition to creation of the 9-11 Commission by denying that Bush had ever opposed the commission. In fact, Bush did oppose the creation of the 9-11 Commission. (10/21/04)• O’Reilly falsely claimed Iraq had ricin. O’Reilly responded to a caller to his radio show by defending the Iraq war: “They did have ricin up there in the north — so why are you discounting that so much?” In fact, the Duelfer report (the final report of the Iraqi Survey Group, led by Charles A. Duelfer, which conducted the search for weapons in Iraq following the U.S.-led invasion) indicates that Iraq did not have ricin. (10/19/04)• O’Reilly repeated discredited claims on Iraq-Al Qaeda link. O’Reilly interrupted a former Clinton administration official who tried to correct the record on O’Reilly’s claim that terrorist Abu Musab al-Zarqawi constitutes a direct link between Al Qaeda and Saddam Hussein’s Iraq. He also allowed a conservative guest to repeat without challenge other discredited claims about Iraq’s supposed involvement in terrorism — claims O’Reilly has himself cited in the past. (9/27/04)• O’Reilly fabricated “Paris Business Review” as source for success of French boycott. O’Reilly falsely claimed “they’ve lost billions of dollars in France according to ‘The Paris Business Review’” due to an American boycott he advocated of French imports. Media Matters for America found no evidence of a publication named “The Paris Business Review.” (4/27/04)• O’Reilly cited phony stats to argue that taxes on rich are excessive. O’Reilly tried to “blow off” the argument that wealthy Americans ought to pay more taxes by citing phony statistics about the tax burden the rich currently bear. (6/30/04)• O’Reilly confused on elementary economics. O’Reilly told a caller on his radio show, “We [the United States] have a trade deficit with everybody, because everybody wants our stuff, and we’re not wild about snails” — indicating that he doesn’t know the definition of “trade deficit” and implying that the United States runs a trade surplus with France. In fact, in the first four months of 2004, the United States had a $3 billion trade deficit with France. (6/10/04)• O’Reilly doctored quotation to suggest Soros wished his own father dead. During his smear campaign against progressive financier, philanthropist, and political activist George Soros, O’Reilly doctored a 1995 quotation by Soros to make it seem as if Soros wished his own father dead. (6/1/04)• O’Reilly questioned if Kennedy would show up to Democratic convention ... as Kennedy spoke behind him. O’Reilly teased an upcoming segment of The O’Reilly Factor, broadcast live from the Democratic National Convention, by saying of convention speaker Senator Edward Kennedy: “When we come back, we’ll let you listen to Ted Kennedy for a while, if he shows up.” In fact, Kennedy had already shown up and had been speaking for several minutes, as O’Reilly need only have turned around to see. (7/27/04)• O’Reilly disparaged Democrats with trifecta of voter falsehoods. In a discussion about what went wrong for Democrats in the November 2 election, O’Reilly claimed that Democrats “lost votes from four years ago”; that “18- to 24[-year-old]s didn’t go” to the polls; and that “[c]ommitted Republicans didn’t carry the day for the president; independents did.” All three claims are false. (11/4/04)• O’Reilly on the radio: Three lies, one broadcast. Lie No. 1: Bush tax cuts didn’t create the budget deficit. Lie No. 2: “Socialistic” French, Germans, and Canadian governments tax at 80 percent. Lie No. 3: Canadian, British, and French media are “government-controlled,” but Italian media is free. (7/7/04)• Appearing again on Today, O’Reilly repeated false claim that he didn’t attack Cindy Sheehan “personally,” suggested he never uses personal attacks (6/14/06)• O’Reilly hatchet job on Boxer filled with lies [1/24/05]• Hannity and O’Reilly conveniently ignore accusations that CIA misled Congress [7/10/09]• Defending Coulter, O’Reilly and Limbaugh claimed she “doesn’t lie” [6/9/06]• O’Reilly falsely claimed he’s only “called for one boycott ... and that’s been France”June 29, 2006• O’Reilly ambushed by his health care lie — Now what about that Fox News “zero tolerance” policy? April 17, 2010• O’Reilly treated Radio Factor listeners to a cornucopia of misinformation about intelligence, Iraq, terrorism May 11, 2006• O’Reilly raised question of whether or not he’s a liar; smeared CAP’s Podesta June 7, 2004• O’Reilly: “No lies have been told about anyone ... and you can’t produce one, madam” February 17, 2005• O’Reilly agreed with O’Neill’s lies, then boasted of “fairest Swift Boat coverage in the country” September 16, 2004• O’Reilly denied lying about Soros September 17, 2004• O’Reilly defended Bush service record with lies September 14, 2004• O’Reilly: Calling Alterman “Castro confidant” was “just making fun” June 17, 2004• O’Reilly renewed attacks on columnists Hernandez and Rodriguez; claimed Hernandez is “incompetent” and a “Latina ideologue” November 7, 2005• O’Reilly’s Midwestern Yuletide smear tour rolls on to “Madison, Wisconsin, where you expect those people to be communing with Satan” December 14, 2005• O’Reilly denied comparing Franken to Goebbels — but he did; CAP urged: E-mail O’Reilly “to correct the record” June 23, 2004• O’Reilly falsely claimed no evidence U.S. has used “electric shock” on detainees June 19, 2006• Latest attack on Imam Rauf: He “pals around with truthers” September 14, 2010• O’Reilly challenged on lies July 6, 2004• O’Reilly lied about his French boycott ... again July 16, 2004• O’Reilly And Lila Rose Team Up To Spread More Lies About Planned Parenthood May 29, 2012• Fox Regularly Uses The “Racial Code Words” Denounced By Fox’s Juan Williams January 31, 2012• O’Reilly on MMFA: “A Far Left website [is] questioning my honesty. It’s all a bunch of baloney.” June 29, 2004• O’Reilly again trumpeted “annoying” French boycott October 27, 2005• Serial misinformer O’Reilly: Bill Moyers is “totalitarian” January 6, 2005• O’Reilly falsely claimed he did not have option to register as an independent October 3, 2005• O’Reilly on France: “One of the few countries in Europe that really doesn’t speak English,” people “don’t take a shower for 18 days” November 9, 2005• O’Reilly: “I Think The Danger To The Country Now Lies In The Executive Branch With President Obama” April 18, 2011• O’Reilly said Savage doesn’t engage in “malicious” attacks; Limbaugh “doesn’t lie”June 23, 2004