Conflicts Of Interests To Racism To Dangerous Rhetoric To Bad Business Deals... Trump Really Is The Worst Candidate EVER!


Newsweek: If Donald Trump is elected president, will he and his family permanently sever all connections to the Trump Organization, a sprawling business empire that has spread a secretive financial web across the world? Or will Trump instead choose to be the most conflicted president in American history, one whose business interests will constantly jeopardize the security of the United States?Throughout this campaign, the Trump Organization, which pumps potentially hundreds of millions of dollars into the Trump family’s bank accounts each year, has been largely ignored. As a private enterprise, its businesses, partners and investors are hidden from public view, even though they are the very people who could be enriched by—or will further enrich—Trump and his family if he wins the presidency.

Maddow: No easy answers to resolving Trump's conflicts of interest Rachel Maddow looks at the Donald Trump's business interests like those highlighted in Kurt Eichenwald's Newsweek piece and notes that a blind trust would not resolve conflicts for a "President Trump" and neither would handing the company to his kids.

Dick Cheney makes alot of money from Halliburton who got no-bid Government Contracts for Iraqi Oil totaling over 39 Billion (i.e. the contracts were given to them without competition for rates thus we have no idea if they overcharged us by billions). The reason Dick Cheney is not in trouble for this... actually, I can't answer that question since Cheney's crimes are just too numerous for one thing not to add to the others. But in theory, Cheney is not in trouble for this because these payments are "deferred income from when he was in Halliburton". To say that Cheney had an agreement beforehand with Halliburton for Iraqi Oil would be a conspiracy despite the evidence we have of oil war being planned for Iraq before 9/11 because our documents don't go that far (or maybe they do):

Rachel Maddow Exposes The Bush Administration's Reason For The Iraq War: Oil (recently released documents suggests more impropriety by Cheney than we could prove before)

In any case, Donald Trumps link to his business isn't hidden like Cheney's link to Halliburton. It's all out in the open AND his kids are family;

Without a COMPLETE termination of any links between Trump and his organization he can't be trusted to make foreign policy decision without the thought of making profit or harming a country to harm a company's profit there for revenge reasons. Thus the conflict of interest problem is a very big one. 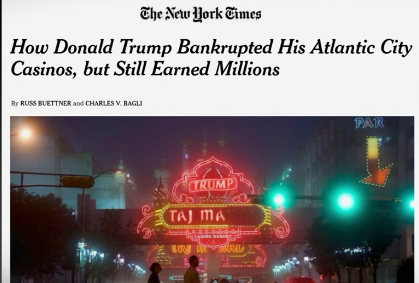 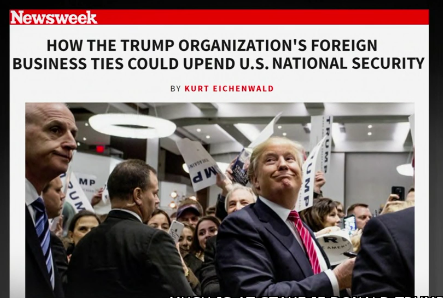 Articles showing there are a serious problems with what Trump says (i.e. such as his lies about when he was against the Iraq War... a very important event);

CNN: Businesses could pose conflicts of interest for a President Trump

Alternet: Is Trump an Aberration? The Dark History of the 'Nation of Immigrants' His language may be hateful, but America is no stranger to Trump's anti-immigrant policies.

Salon: Recession hangover and the rise of Trump: His rise is fueled by an anger based on fiction

Salon: GOP Rep. Steve King slams Colin Kaepernick: “This is activism that is sympathetic to ISIS” "I understand that he has an, umm, Islamic girlfriend that is his fiance and that this has changed him" (connects to the sort of rhetoric we have come to expect from the GOP)

Alternet: Kentucky Governor Suggests Violence if Hillary Wins "Whose blood will be shed?" asked Bevin. "It may be that of those in this room.'"


Alternet: The Normalization of Evil in American Politics The racist, misogynist, authoritarian strain has always been there, but Trump’s candidacy has brought it into the mainstream. And media have helped.

TruthOut:  The Toxic Myth of US Innocence: From "The Deer Hunter" to Donald Trump

Alternet: ELECTION 2016: Why Does Trump Survive Scandals? Because Scandals Are Part of His Appeal Trump spreads stories about his own corruption to try pretend that he is honest.

Salon: Trump targets “the FDA Food Police,” calls for elimination of food safety regulations in new tax planAlarm: This is not a joke


Note: If transparency hurts Trump and he can't show his taxes then we have a serious problem because that means he's not only hiding something now, he will do the same as President. That much lack of transparency would be a scary precedent. It was scary with Mitt Romney and it should be even more scarier with Donald Trump.

Salon: Trevor Noah on being mixed-race in apartheid South Africa: “I was just living this life of being a physical crime” Noah sat down with "Late Show" host Stephen Colbert to promote his new book, "Born a Crime" (GOP rhetoric leads to this sort of perception on a general level, Liberals are just stronger & in a larger majority here then they were in South Africa)

Salon: More dangerous than Trump: Why we should fear Mike Pence for refusing to call David Duke “deplorable” Pence's decision to not rightfully label an unapologetic white supremacist was a strategic choice and message

Alternet: Trump’s Lie About the Iraq War Is Just an Excerpt of a Greater Deception

Salon: Trump’s no Einstein: But his ignorant, illiterate answers to the campaign science quiz reflect a non-stupid strategy Trump says there's no climate change, and no money to fix it -- but his non-answers aren't as dumb as they seem

Salon: Donald Trump’s spineless foes: Lurking within the Republican Party is deadly silent opposition There's more resistance to Trump inside the GOP than you might realize; people are just too scared to come forward

Salon: WATCH: Seth Meyers compares Trump’s charitable donations to “saying you have a private jet when you only have a private Jetta” Trump's camp claims he's given $100 million to charities, but sans tax returns, less than $10,000 is accounted for

Salon: The general of gossip: Colin Powell’s leaked emails depict a juvenile busybody rather than an elder statesman Colin Powell's immature and silly emails show why he should stay out of the election and maybe start a blog

Salon: Beware the murder stats: Why the right will use them to smear Black Lives Matter and how the left can fight back Forthcoming FBI statistics will likely reveal a murder uptick in 2015, but it wasn't caused by Black Lives Matter

Salon: Trump supporter who punched 69-year-old protester with oxygen tank sought by police While Trump chided Hillary Clinton for calling some of his supporters "deplorable," some were punching protesters

Alternet: Watch: Pastor at Black Church Interrupts Trump's Clinton Bashing "I invited you here to thank us for what we've done in Flint, not give a political speech."

Salon: On Fox News, Trump trashes Flint pastor who rebuked his political attacks Trump told "Fox & Friends" he thought Rev. Faith Timmons was "out to sabotage" him: "She was a nervous mess"

Salon: “The Night Of” star Riz Ahmed writes poignant essay about being a Muslim actor post-9/11 Ahmed recounts being "insulted, threatened, and then attacked" by security in an airport interrogation room in 2006

Salon: Donald Trump’s campaign really is Gamergate being played out on a national scale Trump is able to manipulate the media into ignoring the real stories to chase down Clinton non-scandals