How the DNC helped Hillary; 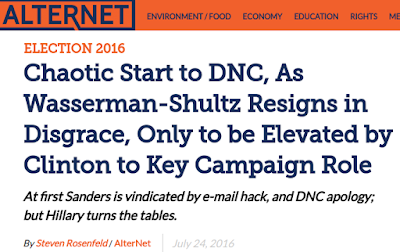 Alternet Article: Chaotic Start to DNC, As Wasserman-Shultz Resigns in Disgrace, Only to be Elevated by Clinton to Key Campaign Role At first Sanders is vindicated by e-mail hack, and DNC apology; but Hillary turns the tables.


In short, a person in power helped another person gain power while going against morality and their mandate to oppose another candidate. The media is a whole other problem (though, they too, are following the basic path of despotism). That's what communists do, they play favorites. That's what dictators do, i.e. they do whatever they can , even if it is illegal, to get thier way. That's what tyrants do, they manipulate elections to favor them. There is no excuse for this and, if nothing else, this signals the end of American Democracy in a very public way... while the Iraq War coverup etc. was the shady stuff that happened in the background as a preliminary to a takeover by a benevolent or malevolent tyrant(s). However, no matter what, American history is turning back towards tyranny (which most of human history is composed of), after it's wonderful and glorious golden age of democracy (probably ended with the second world war but took decades to flower) ... which will probably inspire Mankind for centuries or millennia to come (i.e. as it becomes traditional like Eden is to us).

With the DNC email leak we now have conclusive proof of tampering with an election by the Democratic party while claiming to be democratic. I have more proof (in the links below) that suggests that this sort of rigging was complicit between the DNC and the Clinton campaign.

Basically, everyone noticed the rigging of the Democratic election and I spent alot of time trying to document it. My conclusion about the Democratic party was that it was acting like a communist party (using favors and favoritism as it's method of choosing and promoting a candidate) and thus should be disbanded;

To back this claim up I researched a series of proofs showing intent at deception on a mass scale;


When you put all the evidence together (above) it does begin to seem like a large covert effort has been underway for a while to win the Democratic Primary through immoral and deceitful means.

The following goes over even more evidence of foul play and election rigging by a party that is supposed to be impartial (for the people's sake), i.e. the DNC email leak...

The Motive (they want to return to the White House):

Hillary & Bill Clinton Have Already Been Co-Presidents For 8 Years. Electing Them Again Goes Against the Spirit Of The Law, i.e. NO THIRD TERMS!


More details on the email leak;

ABC story on the emails (4 most damaging emails);

Here are some of the most damaging finds from the leak:
DNC Chairwoman Debbie Wasserman Schultz Calls Sanders Campaign Manager Jeff Weaver an "A--" and a "Liar"
In May the Nevada Democratic State Convention became rowdy and got out of hand in a fight over delegate allocation. When Weaver went on CNN and denied any claims violence had happened, Debbie Wasserman Schultz, once she was notified of the exchange, wrote "Damn liar. Particularly scummy that he never acknowledges the violent and threatening behavior that occurred."
In another instance, right before the Nevada Convention, Weaver publicly commented, "I think we should go to the [national] convention." The chairwoman was flagged about this comment and responded in an e-mail, "He is an a--."
Highlighting Sanders' Faith
One email shows that a DNC official contemplated highlighting Sanders' alleged atheism — even though he has said he is not an atheist — during the primaries as a possibility to undermine support among voters.
"It may make no difference but for KY and WA can we get someone to ask his belief," Brad Marshall, CFO of the DNC, wrote in an email on May 5, 2016. "He had skated on having a Jewish heritage. I read he is an atheist. This could make several points difference with my peeps. My Southern Baptist peeps would draw a big difference between a Jew and an atheist."
Building a Narrative Against Sanders
"Wondering if there's a good Bernie narrative for a story which is that Bernie never ever had his act together, that his campaign was a mess," DNC National Secretary Mark Paustenbach wrote in an email to National Communications Director Luis Miranda on May 21. After detailing ways in which the Sanders camp was disorganized, Paustenbach concludes, "It's not a DNC conspiracy it's because they never had their act together."
The idea was nixed, though. "True," Miranda acknowledged in his response. "But the chair has been advised not to engage. So we'll have to leave it alone."
Lamentations That Sanders Is Not a Democrat
As the primary season wore on, Wasserman Schultz appeared to grow exasperated with Sanders' desire to stay in the race when the delegate math was against him — in one email lamenting the fact that he is an independent in the Senate but was running as a Democrat in the primaries. In an April 24 email she received with an article describing the ways Sanders felt the DNC was undermining his campaign, she wrote back, "Spoken like someone who has never been a member of the Democratic Party and has no understanding of what we do."

Jill Stein fighting for Sanders supporters at the DNCJul. 27, 2016 - 5:25 - FBN host goes behind the scenes with the Green Party's presumptive presidential nominee

Extract from Transcript: KELLY: It's been a raucous day. We've got it all covered for you with Shannon Bream on the floor.
And Trace Gallagher with the details of how this all started. We go first to Trace. Trace.
TRACE GALLAGHER, FOX NEWS CORRESPONDENT: Megyn, the leaked e-mails run from January 2015 through May of this year. The most damaging ones are from later in the primary season when Hillary Clinton had a sizeable lead.  Still, the e-mails appear to fly in the face of the Democratic National Committee's obligation to remain neutral. For example, ahead of the Kentucky and West Virginia primaries, DNC officials apparently tried to use Bernie Sanders' religion against him. Sanders is Jewish but says he's not religious.
So in one e-mail, the DNC chief financial officer wrote, quoting, "I think I read he is an atheist." This could make several points' difference with my peeps. My Southern Baptist peeps would draw a big difference between a Jew and an atheist. In response, the CEO of the DNC writes, quote, "amen."  On May 21st, the DNC national press secretary suggested pushing the narrative that Sanders, quote, "Never, ever had his act together." That his campaign was a mess, going on to say, quote, "It's not a DNC conspiracy. It's because they never had their act together." And when Bernie Sanders complained that the party hadn't been fair to him, Debbie Wasserman Schultz herself wrote to her colleagues, quote, "spoken like someone who has never been a member of the Democratic Party and has no understanding of what we do."
Sanders, of course, caucused with the Democrats but had long been an independent. The Sanders campaign was also critical of the DNC for scheduling only six debates, pointing out that in 2008, the Democrats held 25 debates. Sanders argued that fewer debates favored the front-runner.  And as for accusations that Wasserman Schultz was in the tank for Hillary, the former DNC chair said, quote, "If I wanted to favor a candidate, I would not be DNC chair."
KELLY: I mean, it's really unbelievable. When you look at these e-mails, they clearly show that the DNC was working to elect her over Bernie.  There's no question they had their thumb on the scale. They talk about him very negatively. And in particular, the knock on his faith. They conspired -- they appeared to conspire to raise his faith against him, and the response is amen like, yes, let's do it. Tezlyn, let me start with you. Your thoughts about it?

Notice how the excuse for Hillary by a CNN commentator is that there were many elections (caucuses and primaries - which I already answered in detail) that decided the election. He leaves out media bias which influences primary states.... since no one is there to correct misinformation by the Clinton campaign or the Media.

So we are left with, basically, a very crappy analysis that is pushed as valuable and accurate information which goes against the very foundations of a healthy democracy. The Daily News of New York provides excellent examples of this sort of undemocratic behavior in a nutshell;

More in-depth analysis (if you are ready for it)...