Hillary Clinton Passed A Bill To Keep Poor Immigrants In Slavery & Helped Put Black People In Jail. How Is She Not Being Called A Racist?


Introduction: Rachel Maddow has actually shown a huge bias towards picking a women candidate as a cultural thing rather than focus on his qualifications. First some past proofs;

America a late arrival to choosing female leaders -  Rachel Maddow looks back at some past American female presidential candidacies and notes that while many other countries broke that barrier long ago, Hillary Clinton's nomination will be the closest any American woman has made it so far. Duration: 21:24

Bonnet is like the Christian version of the "hijab" to protect what patriarchal cultures value most in a woman i.e. chaste like decency (remember the cleavage episode with Hillary Clinton? That's a similar manifestation of the same idea in our time). In short we are talking about a joke made in a very old time; 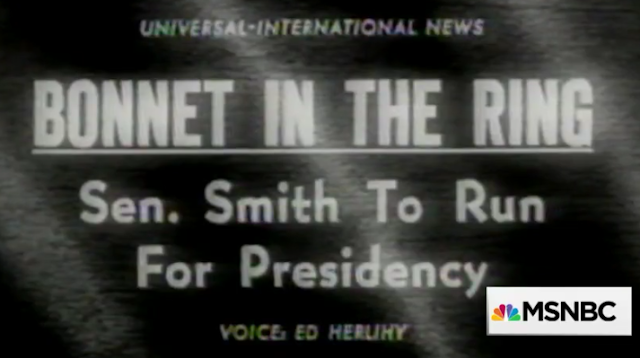 At 6:30 you see the female candidate explain that someone called her an "Amazon war monger" on the nuclear issue (i.e. the guy didn't like her position and since she was almost the only female in politics it was like the comic book where this women from the Amazon called "Wonder Woman" came from and in a culture dominated by men did marvels... sounds like a compliment to me).

The expression Rachel has is as if that past time personally offends her. Then she creates a horrible perspective that provides the hypnotic lens through which she shows the next segment of the first white woman candidate for President having a good time while having to share a mic (clearly the whole mic thing was a new thing, that's how old this footage is. Why not go back to Biblical times and comment on women's role in the Abrahamic golden age?).

She plays this example (notice just one podium for questioner and questioner); 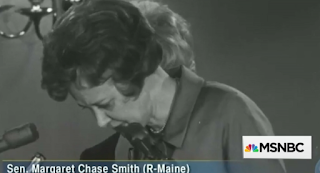 There is laughter at the campaign question and miss amazon wonder woman here hits it out of the park; 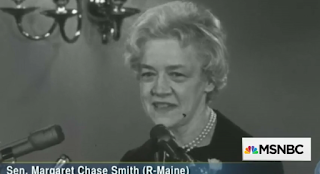 She may not have won (obviously) but she was good at it and had fun doing it. It was the first time when women still were thought of as "bonnet wearers". I doubt anyone knows what that is anymore.

At 8:26 you can hear the audience stunned reaction to the question on women's issues with appropriate sporadic laughter at the ridiculousness of the question and wonder woman hits it out of the park again. I think by here Rachel was embodying what the Christian poet, Khalil Gibran, meant when he said 'through the lens of the mind even an angel can look like the devil'?

By the end there wonder woman was smiling and laughing and triggering the laughter herself... with applause I might add.

Rachel isn't thinking straight anymore. Rather than seeing our accomplishments as a culture in that now a female politician is a normal thing and no one even thinks of comparing her to some comic book wonder woman (that's how common it is). Now rather than voting (or not voting for as the main bias was back then) for a person based on gender we are evolved enough to vote for a person based on qualifications or lack or them. Hillary has experience but to say she's qualified is to sully what the Constitution meant when it said 'Everyone above a certain age and a natural born citizen can be President', i.e. that's how simple the job is as the Founding Fathers envisioned it. Yes. Women probably were worse off then but it doesn't mean that the culture and Founding Fathers were evil. It was just another time.

At 9:06 we discover what's wrong with Rachel. She's comparing this candidate's gender to the whole gender history as a whole and flipping out over the wrongness of it i.e. she angry at THAT crowd. Like I sometimse flip out over the multiple genocides we love to ignore as a culture (media hides it of course), from the Native Americans to Kissinger's world destabilizing agenda through general, and sometimes focused, genocide. But I'll get to that later.

She points out we had the first "African American" (not one of us, i.e. an American from Africa... as opposed to us regular Americans) candidate back then as well. She point sout that Brazil has a female leader and she is being indicted and the world is not upset about it cause its normal (basically saying 'we are f***** up as a culture and we need to elect a female President to change that now you stupid freaks'. I don't even want to use her tactics of conjecture off phobic responses to past times she she's mirrored on something or another but not the culture as a whole. Such a horrible world to live in! I just fight for ALL people to live rather than focus on a gender or gender of a particular race and nation (more on that in a sec).

At 16:08 She begins with her 'countries we see as peers and countries we look down on because of how they treat their women.

She is so offended by the past she wants a female candidate over anything else. A sort of gender racism... or more accurately a sort of Gender & Race supremacist, which I find fascinating to tell you the truth.

You can also see this 'a women - ANY woman - is all we need' attitude in another one of her videos;

What's next for the Sanders movement, post-primary? Nina Turner, former Ohio state senator and surrogate for the Bernie Sanders campaign, talks with Rachel Maddow about Sanders' determination to see his campaign through to the national convention, and to what ends he'll re-purpose his political support after the primary.

Here is the reality of her Candidate that Rachel likes to ignore for various reasons, none of them journalistic (i.e. her prime days as a Journalist are now over, she's just a hack now);

The reason it's a smear is because Henry Kissinger was the right hand man of a known racist (Nixon) and his foreign policy is standard KKK policy (if you look at our "Native American" past).

Here is how Henry Kissinger describes his foreign policy (which has been adopted by the State Department with Hillary being so good at it that she was actually complimented by him!)

In debate, Hillary Clinton boasted that she is supported by Henry Kissinger, accused war criminal who oversaw policies that led to millions of deaths Hillary Clinton has a long history of supporting former Secretary of State Henry Kissenger

Kissinger also promoted a “madman” strategy in the U.S. war in Vietnam, in which approximately 3 million Vietnamese were killed. Kissinger’s strategy was to make the U.S.’s enemies believe it “might be crazy” enough to drop a nuclear bomb on them.

In “The Trial of Henry Kissinger,” Christopher Hitchens accused Kissinger of the following crimes, recommending that they be tried in international court:

1. The deliberate mass killing of civilian populations in Indochina.2. Deliberate collusion in mass murder, and later in assassination, in Bangladesh.3. The personal suborning and planning of murder, of a senior constitutional officer in a democratic nation — Chile — with which the United States was not at war.4. Personal involvement in a plan to murder the head of state in the democratic nation of Cyprus.5. The incitement and enabling of genocide in East Timor6. Personal involvement in a plan to kidnap and murder a journalist living in Washington, D.C.

Kissinger has returned the admiration to former Secretary Clinton. In 2012, he sent Clinton an intimate handwritten message, stating “I greatly admire the skill and aplomb with which you conduct our foreign policy.”

You can see that what Kissinger sees as sensible foreign policy is exactly what we did with the Native Americans in our White Supremacist past and since Nixon liked white supremacist leaders and Kissinger was his right hand man and is a close friend of the Clintons, what we have here is a clear connection to white supremacists that only hack journalists can ignore.

Here is another example of a positive bias towards her candidate because of her gender (thus having a negative bias towards anyone of the other gender... my point is Maddow is too biased to provide us with useful or at least accurate information anymore);

Rachel has a form of gender based racism that seems to follow what we have learned from recent scientific studies;

Is everybody a racist?The studies just keep coming. Unconscious racism is pervasive. It starts early. And it creates a deadly empathy gap
How can we fix unconscious racism?Racial prejudice has its roots in children’s natural drive to carve the world up into categories. Can research do anything to fix this?

Email ThisBlogThis!Share to TwitterShare to FacebookShare to Pinterest
Labels: Not a Journalist, Rachel Maddow