Hillary Clinton: Sanders' superdelegate strategy is 'perplexing' - Democratic presumptive presidential nominee Hillary Clinton talks with Rachel Maddow about Bernie Sanders' plan to stay in the race until the convention, lobbying superdelegates to switch their support to him. 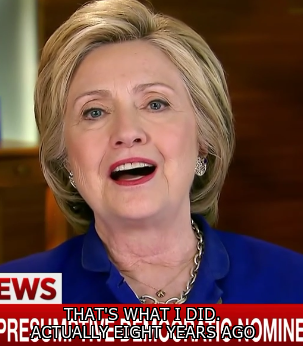 I don't know if the media helped her last time but if they did then what she is saying is that when even the braking effect of winning delegates when you lose a race wasn't enough to stop Obama and that's OK because my private organization decides who will be nominee for President and the people have to pick a President chosen through a process created by the Democratic party to serve it's leaders and promote then like the GOP or a military outfit.

Super Delegates Have Done Exactly What Samantha Bee Said They Would Do, i.e. Put A 'Brake On A Non-Establishment Candidate'... Why Is That OK? OR Samantha Bee & Rachel Maddow Prove They Don't Understand Super Delegates... Are They Too In Love With Hillary To See The Truth?

Part left out was that Hillary lied too much to win in a contested convention anyways. Obama proved it. ANd now the media helped a proven liar get nominated cause she is a woman. This very well may be the end days.

REMEMBER: President Obama ACCURATELY Compared Hillary Clinton To George Bush (GOP Establishment) On Foreign Policy
Obama: "Hillary Clinton Will Say ANYTHING To Get Elected" (2008 Radio Add) PLUS Other Obama Take Downs Of Hillary Clinton From 2008 Which Reveal What A Lying Scumbag She Really Is!
Larry Wilmore Interviews Bernie Sanders & Mentions The Undemocratic Way Hillary Is Winning The "Democratic" Primary

(though the democratic party doesn't seem to be democratic at all so to expect them to do that right thing, even at the media level, is unrealistic. They didn't do it for Iraq and that killed 4000 + citizens for a lie for oil. This is to elect one of the supporters of that war to office. Media has a vested interest in this... except for some influential media women who just want a woman President everyone else be damned). 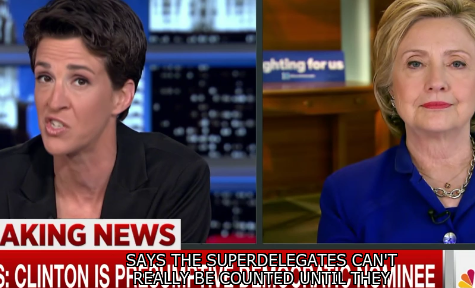 Aww! The whole part where the media, including Maddow Show, helped Hillary in the public's perception by adding super delegates to the totals on screen. Now I really do think she needs to be fired for what she did. But she won't. She's on the right side for once. The side of people who help traitors and terrorists of the white kind (pardoning Cheney or helping the media continue it's charade of lies). No matter what she can no longer call herself a Journalist, What she is is the liberal version of Bill O Reilly. 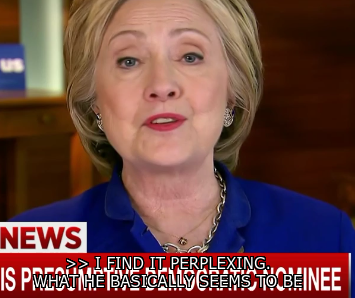 This sounds like a standard GOP tactic of using a number that suits their present needs. Hillary is using a total figure so the counter to this would be to find out what percent of the total she has over Sanders and if that is small argue for that. If 3 million represents 5% then adding the lack of polling places to the tally and lack of access for new voters we are talking about a statistical tie here.

Watch this stupid question. Maddow practically gave those delegates to Clinton for the last several months and not only does she not mention it but acts like this news story exists separate from the others. A total traitor. 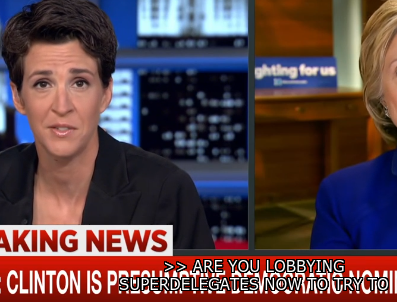 Reminder of why people have though super delegates were already a part of the total and how non one is talking about it cause that would mean the media is either totally a group of morons or they are intentionally involved in manipulating the public's perception to help Hillary win. Clearly they are guilty and their channel should be broken up and sold off like a Romney company;