1. A Spanish Professor Proves The Media Wrong On Trump's Opening Comments On Mexicans;

Professor Alberto A Martinez: It’s time to start cleaning up the mess of misinterpretations about Donald Trump.

Back in June, I first saw Mr. Trump announcing his candidacy for president. What he said about unauthorized immigrants seemed ridiculous so I laughed. I showed the video to friends, and I laughed again. His words were poorly chosen.
But something worse happened. People interpreted Trump’s words in the most awful and offensive ways.
In one of my courses, at the University of Texas at Austin, I asked my students: “What has Donald Trump said that you found most offensive?” One student raised her hand high: “He said that all Mexicans are rapists.” I asked a coworker the same question. He replied: “He said that all Mexican immigrants are rapists.”
I explained that Trump said no such thing. This is what Trump said:

You might well dislike Trump’s words. I did. But let’s not make it worse. He did not say that all Mexicans are rapists. Yet that’s what many commentators did. For example, Politico misquoted Trump by omitting his phrase about “good people.” They said he was “demonizing Mexicans as rapists.” They argued that Mexicans do not really commit more rapes in the U.S. than whites. But that’s not what Trump claimed.
Similarly, other news sources misrepresented his words in offensive ways:

Compare such words with Trump’s words. Which is worse? Writers excerpted the phrase: “they’re rapists,” as if it were about all Mexican unauthorized immigrants, or worse, about all Mexican immigrants, or even worst, about all Mexicans. But that’s not what he said. That’s not what he meant. It was just a remark about some of the criminals crossing the border.
The trick for misrepresenting Trump’s words can be used against anyone.
For example, on October 7, at a Democratic debate, Hillary Clinton answered the question: “Which enemy are you most proud of?” She replied: “In addition to the NRA, um, the health insurance companies, the drug companies, um, the Iranians.”
If you do to her what the media did to Trump, then you should believe that Hillary Clinton is proud to be the enemy of 77 million citizens of Iran, plus millions more living outside Iran, including mothers, children, and disabled people. But that’s not what she meant.
On November 6, at the MSNBC Democratic Candidates Forum, Bernie Sanders said: “we have to pass a constitutional amendment that everyone in America who is 18 years old or older is registered to vote.” He said everyone. Someone might then write: “He proposed that everyone who is in the U.S. should vote, everyone who is 18, even illegal immigrants, tourists, and terrorists.” But that’s not what he meant.
It is no wonder that many people think the media is grossly dishonest. No wonder Mr. Trump’s critiques of the media make his followers cheer.
rump was discussing crimes committed by unauthorized immigrants. Is it true that some people who illegally cross the border from Mexico are good? Yes. Is it true that some others commit crimes? Yes. Is that a problem? People disagree. Some conjecture that unauthorized immigrants don’t commit more crimes than U.S. citizens. But crimes by unauthorized immigrants, even murders, would not have happened if those individuals had not entered the U.S.
Time for a disclosure. I was born and raised in Puerto Rico. Spanish is my first language. I voted for Obama. I live in liberal Austin, Texas, where I work as a tenured professor of history. I’ve never voted for a Republican. My preferred candidate for U.S. president would be Elizabeth Warren. Since she is not running, my preferred candidate is Bernie Sanders.
Anyhow, discussions about illegal immigration are ruined by lack of data. I asked my friends, university faculty: “How many people do you think are deported per year in the U.S.?”
There are two kinds of deportations: some are caught near the border and “returned,” others are “removed” by a court order. Consider the border patrol agents, personnel, the bureaucracy, the lawyers, the resources needed to find people and deport them. How many were deported in 2014?
One of my friends guessed 3,000. Another guessed 10,000. Another guessed 50,000—which would really be a lot of people, imagine.
Actually, in fiscal year 2014, the U.S. deported a total of 893,238 foreigners! That’s a huge number. It includes 577,295 deported by the Department of Homeland Security, plus 315,943 deported by Immigration and Customs Enforcement. Among the latter, 2,802 were classified as suspected or confirmed gang members.
Since 1990, the average is 1.2 million deportations per year. The highest in U.S. history was 1.86 million foreigners deported in the year 2000. That’s astonishing.
How many were criminals?


2. Lets look at it from another angle with the Nightly Show who bought the medias propaganda wholesale;


BLACKLASH 2016: THE UNBLACKENING - TRUMP DUMP JULY 2, 2015 -  Republican presidential candidate Donald Trump doubles down on his offensive comments about Mexican immigrants, despite losing his partnerships with Univision, NBC and Macy's. (7:56)
The specific statement in question is one of facts, real or not, that are touted on a top "news" channel ( you call it news and some people are gonna think it's news... if you don't expose and end it then you are acting like this news source - that controls over 50% of American opinion, doesn't exist); 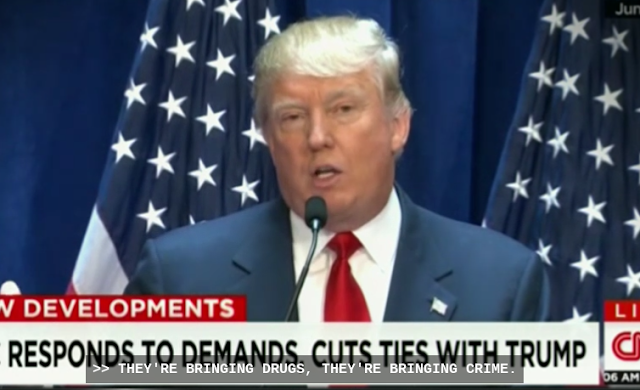 Is Trump talking about news? Lets look at some articles from Latino Fox News about some stuff we know about ILLEGAL immigrants crossing the border (keep in mind, this is the same channel that vilify Muslim murderers while giving Christian murderers the 'get off free' card);

Mexican cartels take over methamphetamine trade in the Ozarks

Problem seems to be that Donald Trump is over generalizing to a point that America's incompetent media can't handle it anymore.

This is the one that really pisses off the fear mongers... 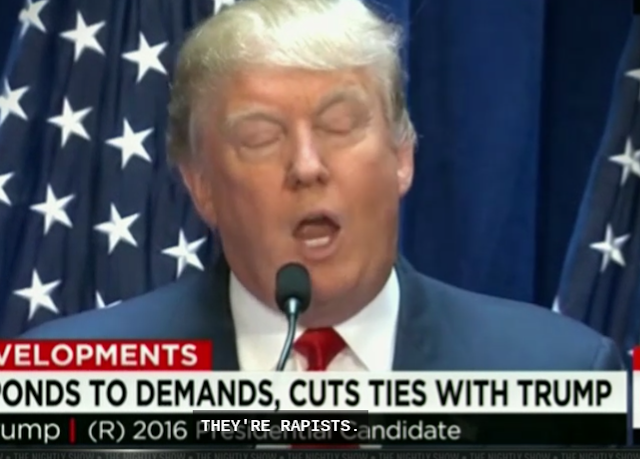 All stuff from normal news stories. What was different is that the media's and comedians favorite punching bag, Donald Trump, was saying it. No GOP person backed down from eventually showing that 'yes, it's our media created base' i.e. it's basically the most sensible policy proposal given our steady disinformation propaganda program to destroy America as they have always done. (It's why the Democratic Political Establishment pardoned Cheney on torture and didn't look further, cause the political establishment is in on it).

Article: The media needs to stop telling this lie about Donald Trump. I’m a Sanders supporter — and value honesty Trump's words on Mexicans have been misconstrued by all sides. This liberal, Puerto Rican professor says enough


3. Public Opinion Effect With Latinos/Hispanics - by the media's racist rhetoric where they like to assume the worst about everyone if Donald Trumps says it (Its a normal tactic);


DONALD TRUMP TO THANK FOR INCREASE IN LATINO CITIZENSHIP MAY 12, 2016 -Jordan Klepper finds out why Donald Trump's presidential campaign has increased the number of Latino immigrants seeking American citizenship. (5:31) 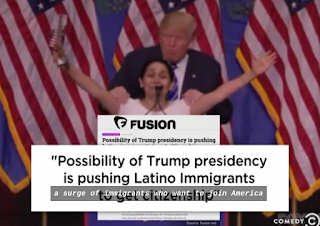 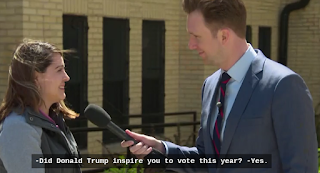 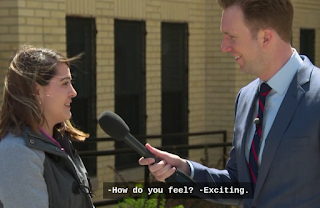 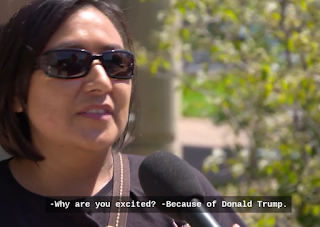 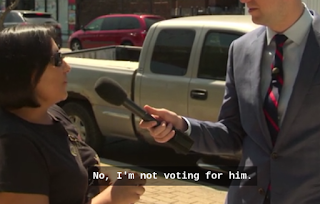 So this style of fighting the media by Trump, in a general election, doesn't seem to be working.


3. Here is what a media freak-out over tiny words, like the other side did with Obama in 2012 (using out of context comments to argue their case like Fox News), looks like (i.e. they pull emotional strings in weirdly offensive ways);

What the media did reminds me of multiple studies the, predominately white, media doesn't cover;

Is everybody a racist?The studies just keep coming. Unconscious racism is pervasive. It starts early. And it creates a deadly empathy gap


How can we fix unconscious racism?Racial prejudice has its roots in children’s natural drive to carve the world up into categories. Can research do anything to fix this?

RFK’s final victory speech On June 8, 1968, the nation buried Democratic presidential candidate Robert F. Kennedy, after he was assassinated the night he won the California primary. MSNBC's Lawrence O'Donnell takes a look at the life and death of the legendary political figure.


Highlight of emotional strings being pulled; 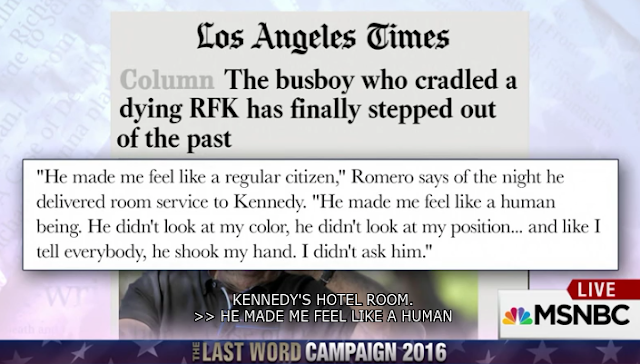 Of course, there does seem to be some racism in the liberal media but it seems to be unconscious cause they all seem to be sitting there with expressions of benevolence on their faces like their racist ministering's to the news is for the public benefit (you took everything out of context like Romney did in 2012 for Obama. It was a racist tactic then and it's a racist tactic now. The only difference is that now it's the white liberal media who DOESN'T believe it's racist and since they tend to use facts in their news - before making shit up - people believe them). I would like to point out that Rachel Maddow pointed out how they look down on how some other countries treat women (admitting to a sort of racism we don't talk about but use when we are killing the women and children for fun and pretending it never happened) while never pointing out all the rapes in the military under our political establishment. The whole thing is just creepy, like some Orwell novel.

Here is Maddow continuing with the emotional push of the media and, apparently, trying to help the GOP find a new leader using a tactic based on an unconscious racist understanding (proven above). My disgust of Maddow just grows by leaps and bounds as she continues her path towards becoming a Fox News girl.

The question is Trump agrees with is that the Judge because of his ethnicity may have bias towards Donald Trump's case in court. This is a very normal request in legal circles when you ask for a different juror or request a re-trial or request a trial be moved to a different venue because of local bias towards the one being prosecuted. What Trump did was go public about it. 'Hey, lets get everyone involved in the decision making process'. BUT TRUMP DOES HAVE THE RIGHT TO ASK FOR A DIFFERENT JUDGE UNLESS THIS JUDGE WAS NOT HUMAN OR NOT WATCHING THE MEDIA.


What Trump said was what has already been analyzed above, hopefully adequately to show the liberal media f***** up.

Trump claimed that the media is having a racist response to him. Yes, that does seem to be the case. He also said it was because of the border wall which I'm not so sure about but that comment may work for a GOP base. What can't be argued is that there is definitely an out of context media campaign going on led by a bunch of white people trying to tell minority voters what they should think on Trump. Just like Romney & Fox News did in 2012. Fascinating.

Maybe in their excitement they forgot they aren't really news channels but propaganda arms of the political Establishment? Here are some examples;