I've been documenting the rights treasonous response to the gun shootings in America (see links above), i.e. pretending the only shootings that matter are the ones by a Muslim or someone who claims to be a terrorist and has a Muslim background. I've shown that this sort of double standard is normal in Fox "News" where they try and make the problem something other than it is. I believe this is standard policy for the GOP as it continues with the goal of destabilizing American society like the CIA did with Iran in 1952. This is just another piece of video proof of the GOP's deceptions. (They do this because of thier coverups of Iraq, ISIS and 9/11 which they have done for so long they fear death if it ever comes out so they ALWAYS double down on thier lies and treasonous deceptions).


Hannity opens agreeing with a standard lie that Fox & the GOP have been selling as a decoy for something as it defies that facts which they keep off air (If it's just so gun manufacturers can make money then we are dealing with the worst sort of capitalism here... like when the white devils sold small pox laden blankets to the "Red Indians"); 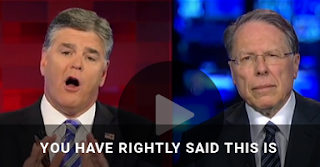 This is something the GOP & Fox News like to do which I have noticed and commented before i.e. they pretend that the decoy they are doing is actually being done by the left. This is how they create a dynamic of "two perspectives" but the problem is one tends to use facts and the other (Fox/GOP) likes to make facts up or exclude facts so they can push thier agenda. This IS criminal behaviour so the Government and Law Enforcement officials have to be seen as co-conspirators or just plain incompetent for these assholes to be pushing this bullshit for so long. 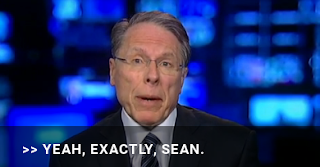 This is what I mean when I say they are saying the left is doing what they are doing. Just ONE look at the actual numbers (not covered on Fox News) reveals WHO is pushing the wrong issue (on purpose to hide thier crimes by scapegoating Muslims. A crime if we still had laws for traitors.) Let me explain;


How common are mass shootings or shootings in general? ...

Lets take a look the top 4 mass shootings in US history;

Orlando, Florida - Pulse nightclub - At least 49 dead
June 12, 2016: A gunman armed with an assault-type rifle and a handgun opened fire inside a crowded gay nightclub in Orlando in a rampage and hostage standoff that lasted three hours before he was killed in a gunfight with SWAT officers, police said. The gunman was identified as 29-year-old Omar Mateen. The attack is being investigated as a possible act of terrorism.
Blacksburg, Virginia - Virginia Tech - 32 dead
April 16, 2007: Seung-Hui Cho, 23, killed 32 people in two shooting scenes at a dorm and then in a classroom building on the Virginia Tech campus in Blacksburg, Virginia. He then killed himself.
Newtown, Connecticut - Sandy Hook Elementary School - 27 dead
Dec. 14, 2012: Adam Lanza, 20, opened fire at Sandy Hook Elementary School, killing 20 children and six staff members before killing himself. His mother, Nancy Lanza, was also found shot to death at their home.
Killeen, Texas - Luby's Cafeteria - 23 dead
Oct. 16, 1991: Twenty-three people were killed and 20 more wounded when George Hennard opened fire at Luby's Cafeteria. He then killed himself.

In other words, the Orlando shooting was the largest mass shooting in US history by 17 people. The next highest shooting was 32 people in Virginia Tech. The next after that was 27 in Newtown. If you add the top two "NON-Terrorist" mass shootings you get 50 people that died unrelated to Muslims. Add the next one and you are suddenly at 73 people dead, by what appear to be Christian Terrorists (of just crazy white people as GOP & Fox like to see it)
If you add up all the people from the deadliest mass shootings in US history you get 76 people killed by "Radical Islam" and 164 people killed by "white people gone crazy" and 58 people killed by Asians (that's 222 people killed in mass shootings by non-Muslims making Fox News's emphasis on "Radical Islam" as the main threat we face today, a distraction AT BEST). If we leave out mass shootings and JUST look at people "going crazy" with guns (either intentionally or by treating guns with the same safety consciousness of handle water guns), we get an idea of just how common shootings are in America (making 'America is a culture of mass shootings' the ONLY logical assertion to make); 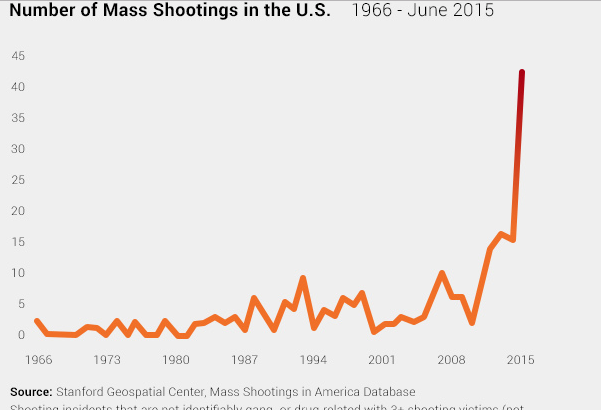 Then Hannity comes out and agrees with Wayne LaPiere (stooge of the Koch Brothers in thier plan to destabilize America? You may not believe me but I'm pretty sure I'm right here) 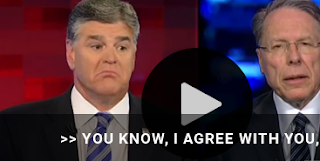 This is an interesting lie only because it's so easy to disprove;

Also, I would like to point out that Fox NEVER mentions this video even when they pretend to do "serious" interviews of Cheney;
Dick Cheney explains how Iraq would fall apart if we invaded in 1994 :


Cheney in 1994 on Iraq
(terrorism had already gone up 600% by 2007 proving the 1994 Dick Cheney right... the coverup continues because they increased terrorism and have to hide it for thier oil profits, i.e. oil companies "donate" heavily to Republicans. Note: Poverty increases crime and thus gangs and thus "terrorism" i.e. violent gangs)

In reality it's the regular shootings that are going to overwhelm us. I already did a summary of the biggest mass shootings above, so now I'll show the other shootings that happened for the few days surrounding the Orlando shooting that the Terrorist Organization (Fox/GOP) are hiding in thier "news" and not including in thier analysis;

If we drop the definition of mass shooting as 4 people or more we get a picture of shootings in the UNited States that is so bad that the Senate Democrats NOT filibustering for so long till Fox News starts talking "radical Islam" means they just don't care about the people. (right now media is focusing on beating Trump so they are overlooking alot of the bad stuff about the Democrat Establishment and that is the sad story of America and how it went from 'beacon for Democracy' to 'hotbed of corruption and treason'). Here are some articles that bring even more perspective to this debate;
Other shootings for the few days around the Orlando shooting;

One dead, three injured, in Charlotte, North Carolina at an apartment complex.

Four injured in Webster, Minnesota at a house party.

One dead, three injured in Stockton, California in a park.

Five dead in Roswell, New Mexico. It was considered the second mass shooting of the weekend, the other of course being Orlando.

Five injured, plus one wounded dog in Fresno, California at a graduation party.

Five injured, all teenagers, in Brooklyn, New York at a playground. The shooting was over a designer backpack.

Five injured in Chicago, Illinois, at a playground.

One dead, three injured in Oakland, California, at a memorial service.

Not limiting the statistics to mass shootings, 125 people have died as a result of guns since Orlando, according to The Daily Beast.

In the week before Orlando, there were nine other mass shootings in June alone, according to Gun Violence Archive. 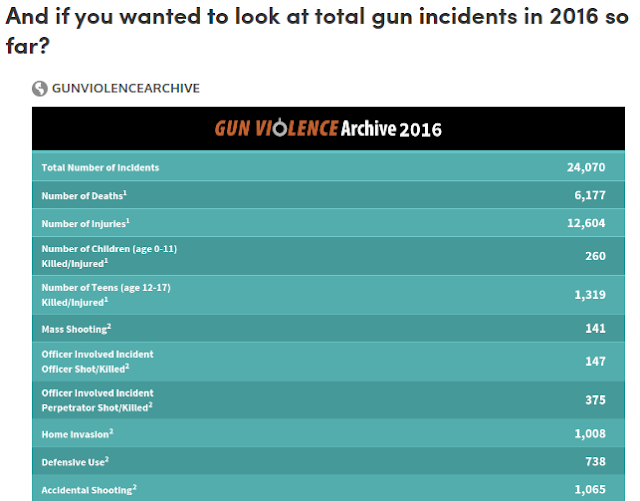 Just look at how MANY shootings have occurred JUST in 2016!

This is basically what the GOP are selling i.e. that despite all evidence it's the shootings related to Muslims are all that matters and thus we need to go on an all out war against Muslims (more gun sales?) while ignoring the fact that shootings in the United States that can be pinned on "Islamic Terrorists" are just a FRACTION of total shootings (which 50% of America that doesn't ONLY watch Fox News & listens to the GOP knows about). Thus I made a short list above of shootings to illustrate the sort of coverup of facts that is going on in favor of thier scapegoating play.

Here is a list of some of the past GOP/Fox deceptions, decoys and treasonous activities that contradict their current sales pitch of deception;