Comments On Daily Show's Skit Showing What's Up With GOP, NRA & Democrats On Gun Control Bills AND We Discover The NRA Is Using A Form Of Legalized Bribery & Threat-making To Block Background Checks To Keep Americans Un-Safe!

A glimpse into what's going on, on guns (key point is NRA is using legalized bribery to stop background checks on guns because of of being against "regulation" like the Koch Brothers BUT the NRA wants to regulate guns in bars... clear scam being pulled here as I'm sure American's will go through the inconvenience of calling a background check service before selling a gun to EVEN a family member to stop innocent people from dying. It's no big deal); 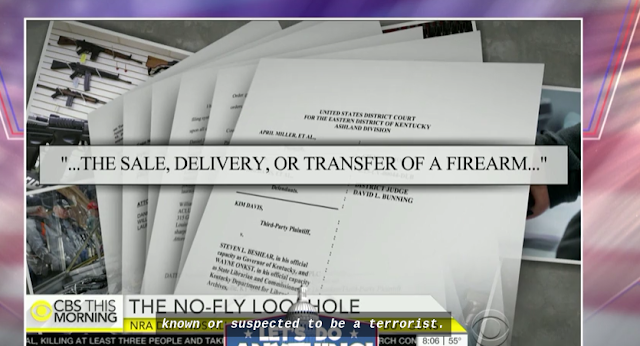 Didn't mention if there was due process to get you off a list or if you would be notified if you were on a list. So I have no opinion on this one. Also, I've been thinking that the Government shouldn't be keeping secret lists anyways. Lets make these secret lists public (isn't that a major concern of the GOP?)

It sounds like a reasonable argument. Of course, they gave the NSA unaccountable, power in deciding who the NSA can tap legally (showing more GOP hypocrisy, which is not a new thing though there is so much evidence of it now that it becomes criminal NOT to act)... though I think they just record everything unconstitutionally;


"We had an FBI consultant on the picture and he told me that 1 in 5 phone calls that we make are recorded and logged and I laughed at him and then he played back a phone call I had had two years prior to joining the picture." Shia LaBeouf 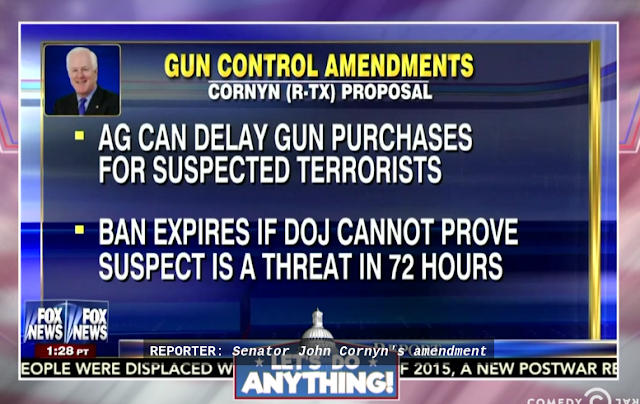 This is weird. Why should we have secret lists in the first place? Lack of transparency is what creates abuse of power situations anyways. Why not have public lists. That way EVERYONE will know who the suspects are and the media will pounce on them... then the people under investigation will know they are under investigation and will have a chance to clear thier name OR the outcry will weed out a potential terrorist. Public lists is a win win situation for everyone!


Trevor Noah seems to working off a survey of Americans where they want something, anything done. While the skit demonstrates how and why Dems and GOP are getting nothing done; 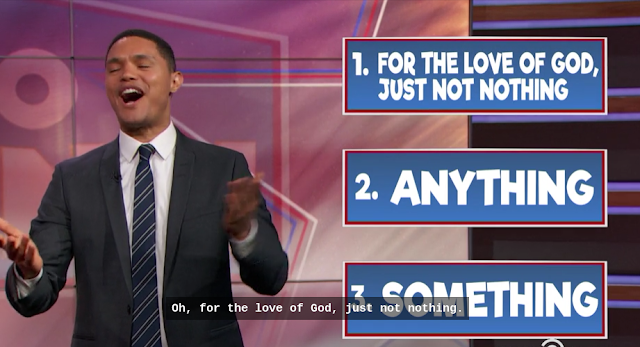 This is the most sensible measure that should have been there from the beginning (apparently the GOP doesn't want to inconvenience anyone to register their guns... then all they have to do to sell their firearm is call an office and tell who they are selling it to and if they get an "OK" they can sell it. A small inconvenience to gun owners who don't want innocent people to die in mass shootings); 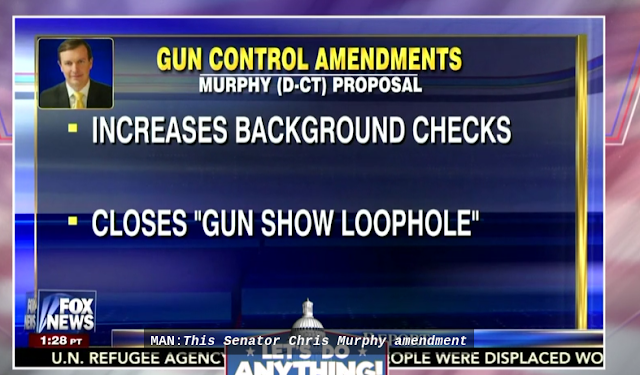 The reason most people will support a measure like this is because it's common sense.


Here we discover that the NRA is using threats of removing a person from public office if they support background checks! And this is from Wayne LaPierre, the guy who doesn't want drunk people in a bar to have guns (or is it just gay people in a bar that he doesn't want to have guns?). In any case, Wayne wants to regulate guns from drunks ONLY IN A BAR and not at home. A background check would be even less offensive as it happens out of public view; 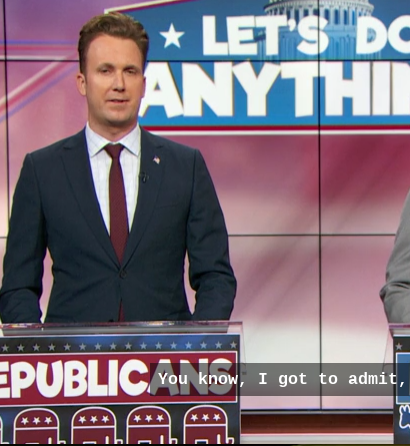 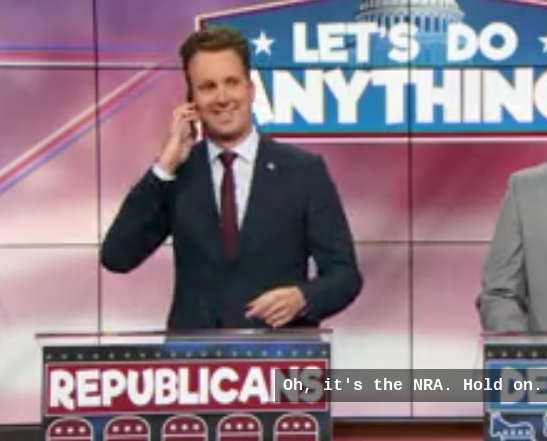 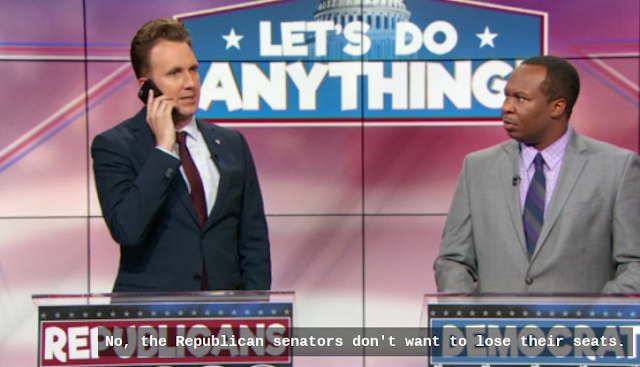 After a call from the NRA the GOP politician changes position on a common sense bill showing how much they truly care about the American people (illustrated here); 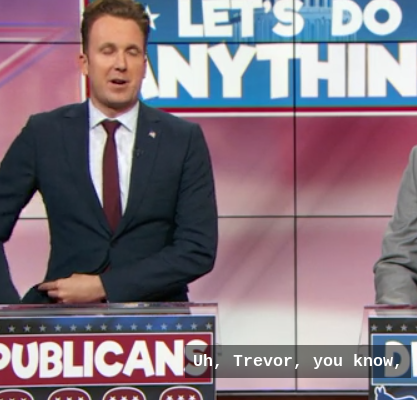 I think Wayne is probably working with GOP behind the scenes on this logic, Not only because he is helping Fox with thier scapegoating of Muslims to hide thier crimes behind fear BUT also because he seems to have opposed guns in bars JUST to oppose Trump which means that NONE of his values are set in stone and he probably does stuff to purposely cause trouble and harm the people of America (I sense a Koch Brother presence here).

How is Wayne going to stop people in bars from having guns except through some sort of check? Like a background check to make sure criminals (such as the GOP's white supremacist supporters who seem to spend alot of time in jail) can't get guns. IN the same way that Wayne wants people not to carry guns into bars, other people would like people to call someplace and do a quick background check before selling a gun TO EVEN A FAMILY MEMBER. I don't understand why this is such a big deal. One phone call can save lives.

If this CAN apply to gun shows as well would this not work as a system of background checks for everyone?... 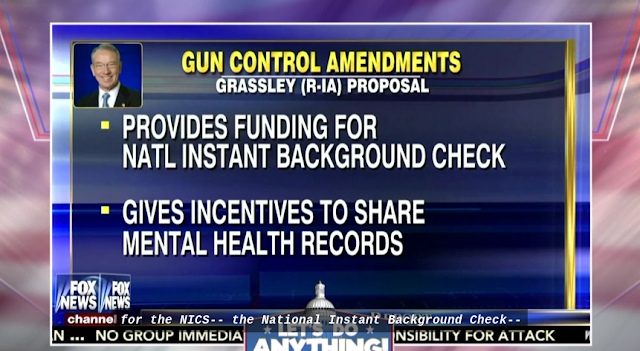 I'm confused. Why provide money for background checks if those background checks aren't universal? This isn't a bill it's a decoy so they can say to the people "we tried" when they clearly are bought and thus are NOT trying. Incentives to share health records seems to be a good idea though.

2. On the other hand, if the first point gives universal background checks at the touch of a button (a phone call), then is this not a good idea? Are you saying Democrats blocked this bill purely for political reasons?


Democrats get this and are right on this point (though they didn't think of sitting in or flibustering on guns for years, even after Sandy Hook, TILL an election year. So they don't have much credibility yet. They would have to make thier filibuster and sit in permanent until results are seen. Of course, they would have to go after Wayne and the Koch Brothers and they don't go after rich people who could possibly donate to them); 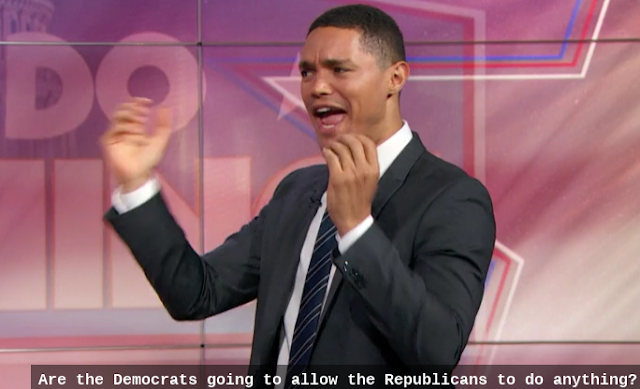 (GOP increases hysteria and will do nothing to solve it! Kinda sick no?)