Background: Hillary & Bill Clinton Have Already Been Co-Presidents For 8 Years. Electing Them Again Goes Against the Spirit Of The Law, i.e. NO THIRD TERMS!

People like George Washington knew more than two terms in office was dangerous for our democracy as one person can gain to much power and accumulate a sort of personality or family cult, like the Bush's did on the right. What we have here on the left is ever worse than anyone realizes because it actually the SAME two people returning to the seat of Power with just the other one of them getting the "Commander in Chief" title!

Thomas Jefferson on a third term & imposing Constitutional limit to accumulating too much power as to make the Presidency an "inheritance"; 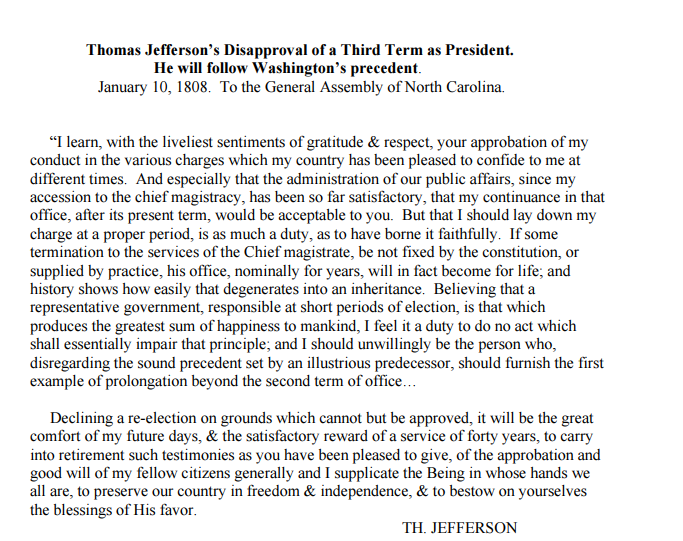 Clearly the title of Presidency is becoming an inheritance EVEN in the minds of her Dufflepud followers;

Jeb vs. Hillary: The race America deserves? - Chris Hayes explains why a general election between two dynastic candidates-- Jeb Bush and Hillary Clinton -- would hold up a mirror to the state of American democracy.

Washington had several reasons for not running again. There was his promise not to seek unfair power as a government official and his desire to avoid being, as he wrote to Trumbull, “charged . . . with concealed ambition.” There was also his “ardent wishes to pass through the vale of life in retiremt, undisturbed in the remnant of the days I have to sojourn here.” Washington’s early promise and the lure of retirement were reasons for his declining to seek a third term.
George Washington was never a man to shirk responsibility. Though he might have liked nothing better than to retire to Mount Vernon after the Revolution, he was, as he wrote Trumbull, always ready to “render any essential service to my Country,” having served, after the American Revolution, in the Constitutional Convention, two terms as president, and again as commander in chief of the Army. By 1799, though, Washington was through with elected office despite the urging of those who knew him. “Prudence on my part,” he told Trumbull, “must arrest any attempt of the well meant, but mistaken views of my friends, to introduce me again into the Chair of Government.”

These are the minimum Constitutional requirements qualifications for a person to run for President;

Question: What are the Requirements to Become President?
Answer: The US Constitution lists three requirements for any individual wishing to become president of the United States. A president must:

Clearly the Clinton's are using a loophole to return to the White House!

The rules are designed with the idea that men dominate in society. But as Madeline Albright made clear, Hillary is not a normal woman, she's a mass murderer. PLUS she is part of the establishment that condones the wars to the point as where no crimes are even perceived much less acted upon. The present situation is EXACTLY what the 22nd amendment was written to prevent! A person (couple or "co-president" in modern times) should not have more than 2 terms in office in the White House. i.e. 2 terms and it's over or too much power accumulates to one (or in this case two) individuals. Avoiding this is the WHOLE point of the law! In Roosevelt time women were only just now beginning to go to college so it just never came up!


Just take a look at the power this couple has attained (you have to read EVERY link to realize what a danger electing Hillary to a third term imposes on the population and on hour future by creating a first-time president of DIRECT inheritance);