Background (I have it out for the Dialy News);


Selected extracts from the - ridiculously long - transcript of the Daily News interview of Hillary Clinton. Beginning with an extract from towards the end of the transcript;

Daily News: But people would like to look at your work and in terms of what you've said...
Clinton: Yeah, here's what I have said. I will release those transcripts when others in the campaign on both sides release theirs. I have been more open than anybody running. You can go and look at...I've got eight years of my tax returns on my website. I've released 30 years of tax returns. I don't hear that coming from my opponent, Sen. Sanders, or from Donald Trump. So there's a lot of information out there about me. And so when I said I will release those transcripts of those speeches when everybody else does, I have reason to believe that others have made some speeches of some interest, and so...

Me: What Hillary Clinton is doing is arguing the case of 2012 with Mitt Romney, i.e. Mitt Romney wouldn't release his taxes and it caused allot of controversy. Of course, Hillary has been in power for so long that she makes money by giving speeches that she keeps secret but can mention in her taxes without getting slammed for it.

That said, she is fighting Bernie Sanders so when she says 'I will release my transcripts if others release them' it is so disingenuous as to be treasonous. Based on her behavior & parallels to Mitt Romney but on transcripts rather than taxes I wrote this post


Is Hillary Clinton The Mitt Romney Candidate Of 2016?

CNN did notice this, after some months, & decided to call her on it in the last debate before New York

CNN's Dana Bash Presses Clinton: Why Not Just Release The Wall Street Transcripts?
What Hillary did was a standard Politician dodge by mincing words and ALWAYS avoiding her Wall Street transcripts as DAMNING evidence. It's the EXACT same tactic Bill Clinton used when he said 'I did not have sex with that woman';

Daily News: Who might that be?
Clinton: Well, we'll have to wait and find out.
Daily News: Right now you’re only running against Bernie Sanders, and he's your only opponent. He hasn't given the speeches….
Clinton: Yeah, but he will not be my only opponent in this general election. So I'm looking over the horizon.

In other words, "I have stuff to hide" says Hillary Clinton on Wall Street and she thinks Trump, who is NOT a politician, has something to hide from his "Wall Street Speeches" (of which he has said nothing, including whether or not he actually gave speeches). For a politicians - with political power - to give speeches to a corporation.. it's much worse. The fact that she hasn't released any speeches shows she has already betrayed the people and she doesn't want them to know.


Daily News: Do you know these three Republicans have given speeches paid to?
Clinton: I have reason to believe Donald Trump has, for money, rather considerable amounts. A lot more than I ever was offered.
Firstly, doesn't matter if you can beat Sanders with your Wall Street record in the open ONLY then can you beat Trump on the same thing (unless Hillary is planning electoral fraud of some sort).

Secondly, her 'reason to believe Trump has given speeches for money' could simply be something her Husband told her to say to forestall suspicion. She and her husband, afterall, do work together (as they did during thier first two terms, i.e. they were BOTH living in the White House) and her husband is well known for his lying even when in court.

What happened? The Daily News let her off easy as I explained in my post explaining that the Daily News ARE Traitors.

Post: The Daily News Has Committed Treason Against New York & America By Covering Up Essential Information From It's Readers!


Daily News: Okay, but let's take a look at, in terms of paying off, and still looking at upstate New York, the data also show that the average annual number of jobs upstate fell from 2008 to 2015 during the Obama years while the United States did gain jobs. I'm still wondering, what is your diagnosis of what went wrong and why is upstate New York such a laggard in the economy and is it really a proxy for a lot of problems that are happening across the country?
Clinton: I think that's a very pointed and important question. Upstate New York has had a series of setbacks going back several decades now, lost a lot of industry first to the South, then lost a lot of industry overseas. And we did not have the right combination of economic tools there or in other places that experience the same kind of job decline to, number one, halt the trend and then to reverse it. And I think we now understand better, or at least I feel like I understand better, what the specific incentives might be in order to tackle loss of employment in places like upstate New York.
Hilary Clinton goes on with her bullshit but basically Obama summarized it best about Hillary Clinton's economic policy PAST:


FLASHBACK: Obama calls out Hillary Clinton for sending jobs abroad while making a ton of money off of the new labor status quo ... also points out her Republican like qualities- Video at approx 40secs:


Daily News: Okay. Well, let's move it out to the macro picture then. Assess the state of the American economy and in particular as it relates to the American worker.
Clinton: I'd say the following: First, we have weathered the Great Recession better than most countries. It was devastating. We had a total loss of 9 million jobs. Five million homes were lost and $13 trillion in family wealth was wiped out. That was a body blow from which many Americans have not yet recovered, and I don't believe that the economy as a whole has fully recovered.
Yes, we weathered the recession with someone who CLINTON SAID WASNT QUALIFIED;
Mediate: Hillary Clinton Did Much Worse Than Call Barack Obama ‘Unqualified’ 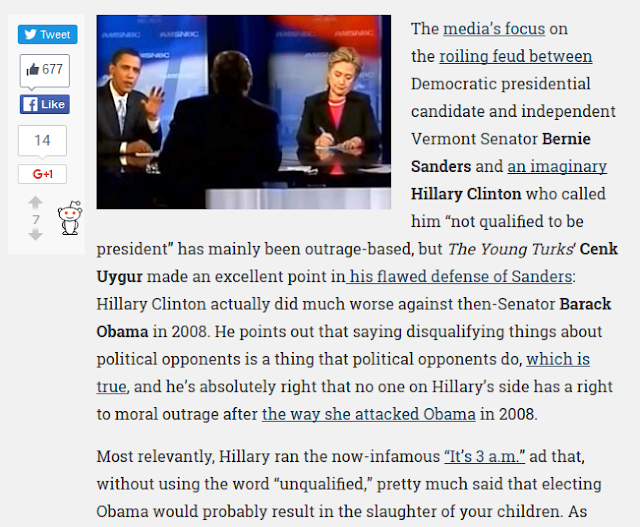 The rest of her answer is irrelevant because she was SECRETARY OF STAT AND NOT AN ECONOMIC ADVISOR. If you want to see Hillayr's accomplishments in office you have to look towards the murder of innocent people in Yemen followed by it's complete destabilization, i.e. Hillary did what Bush did but to Yemen not to Iraq

Post: Rachel Maddow On The Emergence Of Yemen As A Warzone (Did Our Government Intentionally Destabilize Yemen?)

Daily News: When you announced, or when you gave your economic policy speech, you referred back to President Clinton's record and the creation of 23 million jobs. And you did say that President Obama had rescued the economy from the abyss at that point. What you did not do is celebrate the record of job creation, and you didn't go any further than saying that he had rescued the economy and rescued the auto industry. And I'm wondering why.
Clinton: Well, I have in other speeches. I can't recall the exact wording of that one you're referring to, but in many different settings, I have said, you know, we've recovered jobs and we still have a ways to go. We've had good monthly job numbers from the Department of Labor. Now I think it's 70, 71 straight months, so we've got a good record.
Daily News: Seventy-three.
Clinton: Seventy-three. We've got a good record and now we have to build on it. So I often say he did dig us out of the ditch that he inherited. He got us standing again. We're walking but we need to be running. And that's where I think my plans, my understanding of what has worked and what can work again will be put to good use if I'm President.
Here are a bunch of Hillary Clinton lies laid out side by side ;
Video:


Once again, HILLARY CLINTON WAS SECRETARY OF STATE AND HAD NOTHING TO DO WITH THE ECONOMY. Useless media. Treasonous Daily News interview. This is the interview that won them over or was it the huge donations the boss gave to Hillary? BTW, mass murder of Palestinians by Israel is something both seem to support by thier silence and decoys... cause the news about it is NOT old;

Even Obama is not innocent of helping the establishment, in various ways, but Hillary & Bill ARE the democratic establishment, the "super delegate" rules are written for them (seeking a third term together, using a loophole in the law cause women had been ignored in the wording, wannabe dictators, tyrants). There is no way Cheney would have gotten off for Iraq War Torture without the Democrat Establishment's help. There is no way Wall Street would have no criminal indictments for so long with the Democrat Establishment's help. This isn't Obama's party by a long shot, even now. All it takes for American's to forget and get caught up in thier own party's propaganda is one week or one good scandal. Or should I say media? Most PhDs can't tell the difference (turns out the more books you read, without life experience, doesn't make you smarter, which is how "higher degrees" work. Interesting, huh?)

As Obama explained in 2008, Hillary is like George Bush

Email ThisBlogThis!Share to TwitterShare to FacebookShare to Pinterest
Labels: Hilary Clinton, Not Qualified