What's In A Name? From Timothy McVeigh To ISIS To Syed Rizwan Farooq ... What Really Makes A Name Scary


It's the age old story, what to do if you have the same name as a publicized murderer? Well, it depends on the name really. The simple metric is this: The more unusual & hyped up the name the more it tends to stick in people's memory. 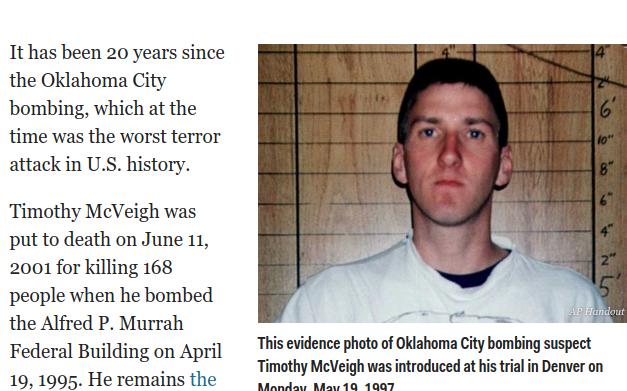 The Oklahoma City bomber was motivated by political reasons (that exist to this day) to bomb the local Federal building outlet. The name "Timothy is so common that Tim or Timothy didn't impact much... but the name McViegh is Irish and if publicized or linked to the IRA with thier bus bombs against the British (A group supported by Elected Official Peter King), then we could see some fear linked to that. But the time of persecuting the Irish seems to be over. Even if they commit actual crimes (such as Peter King).

Next one is a one a like cause of it's sheer Irony. ISIS was the name of an Egyptian Goddess which, though popular around the time of Jesus, is almost unknown today....


Alternet: Having the First Name 'Isis' Has Become a Massive Burden for Lots of People 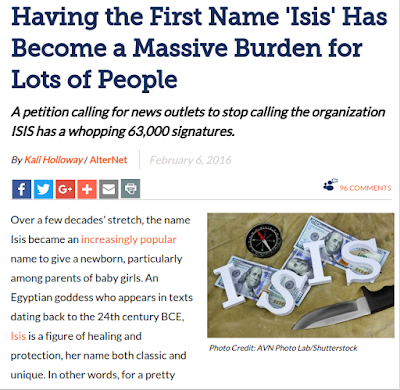 As ridiculous as it may seem, having the first name Isis has now become a massive burden for lots of people, most of them, though not all, women and girls.
Last year, Nutella reportedly refused to print a personalized jar label for 6-year-old Isis Rebanks, though her siblings Oliver and Zuleika had no problems. A British woman named Isis Lake says she’s had flight reservations repeatedly canceled without reason or explanation. San Francisco’s Isis Anchalee tweeted about Facebook shutting down her account (the company “thinks I’m a terrorist,” she wrote) before multiple passport screenshot submissions finally compelled company officials to unlock it again.

And as if junior high school isn’t hard enough, 14-year-old Isis Brown has the daily hassle of dealing with classmate bullies and potential future GOP presidential contenders calling her a terrorist. She finally got so fed up with the relentless teasing she made a video decrying the abuse. "I have the issue of every day when I walk into school, just wanting to stop right there in the middle of the hallway and just cry," Brown tearfully confesses in the clip.
There are, of course, other names that have also changed in the public consciousness, usually due to an association with a single famous, or infamous figure. That can be annoying but fairly innocuous if your name is Cher, Sade or Drake. Less so if you were born before World War II (or, I suppose, if your parents are assholes) and your given name is the once-popular Adolf. Since 9/11, men named Osama have endured physical and verbal abuse by the misinformed and misguided; the same sort of people who imagine a conspiracy lurking in the middle name of one Barack Hussein Obama.
I emailed Isis L. of California, who says her name came from her mom, who “liked Egyptian mythology and liked the history of Isis the Egyptian goddess.” I asked her about common annoyances, and she rolled off a litany of examples.

Now onto a more recent example of "Syed Rizwan Farooq". Who I share a name with, my whole name being "Syed Abbas Eugene Abedi" with "Abbas" being my given name or "first name" as they would call it here. (It's confusing, I know and I'm a little angry about that myself. Just call me Abe.) The other name connection to me in the media (also unrelated to me in any way) is "Saeed Abedini" a Christian pastor recently release from an Iranian prison. 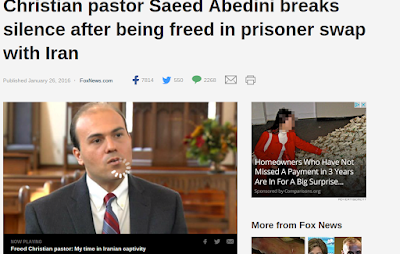 Where my father (Pakistan) comes from the first and last names are family names, kinda like a lineage. This lineage is almost mythological in nature as they claim they can trace it all the way back to the prophet himself. I'll tell you one thing, according to the Indian Government, Jesus passed by a shrine with the name "Syed" in it during his travels during his missing 18 years from the Bible. So this name is allot more common than most people realize EVEN in India or the middle east. My mother is from Oklahoma (I'm half white). 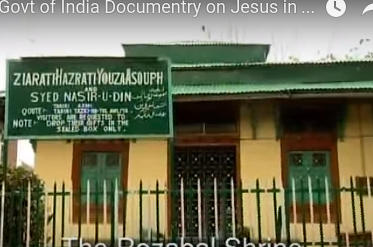 It's interesting that the name on the shrine, "Syed Nasruddin" is similar to the famous joker in ancient story telling normally just referred to as "Mulla Nasruddin" in Sufi stories.


The full documentary;
Govt of India Documentry on Jesus in Kashmir !!

Wrote more about this here.

I only mention this because of the hysteria Fox News & the GOP have built around this name. A group of fellows I've been fighting, politically, for years;

Syed Farooq is an American: Let’s stop the Muslim vs. Christian debate and take a look at ourselvesHis terrible deed does not spring from an unknowable foreign culture. It is violence endemic to the United States

I address you in a moment of collective stress, with another mass shooting, this one in San Bernardino, California, dominating the news. Guessing the identity of shooters—black or white, Christian or Muslim, man or woman (though masculinity is almost guaranteed)—has become a vicious social media ritual. Too many people seem to believe we can discern motivation by ethnicity, or that ethnicity alone determines what type of terror can rightly be deemed terrorism.


A Commentary By The Daily Show - On the anniversary of 9/11, President Barack Obama and hawkish Republicans find themselves in unexpected agreement about military action in Iraq. (8:53):


My responses to The Daily Show's comments;

ISIS is an ancient Egyptian Goddess. Because her story is of "death & resurrection" her story is considered to be a precursor to the story of Jesus & Christianity's ritual of the Eucharist celebrating Jesus's death & ressurection, where ISIS is said to represent the Mother Mary. It's unfortunate to have her name sullied.

True. We cannot use force everywhere where a radical ideology takes root. We have to access the threat level of each group and take it from there. A group with excellent funding, taking large swaths of territory with the stated goal of taking over America would fit that criteria of being a potential threat in 10-20 years. Making sure it can't get big would accomplish our goal is "degrading ISIS", I personally don't think we have to do much else on that front, if ISIS can't grow than it can't be a threat... providing we don't create conditions for their ideology to spread. Currently a force of 30,000 out of a population of Muslims of 1 billion means nothing. The rest of our war is about propaganda.

True. We can't play wack a mole wherever an ideology appears. If we did we would always be killing people. Take the Nazi's for example; during ww2 we wanted to exterminate them but after ww2 we learned to live peaceful alongside with them and they even vote Republican. lol!

From another perspective: Ideology is just an idea, a thought... free speech. Fox News often uses free speech to slander and smear people (especially lack people & other non-whites) that if we were to stop them they would have political strategy lef

From yet another perspective: Although many terrorist groups originate amoungst the KKK & the Neo Nazi's ( US: Militia members plotted to kill federal officials, prosecutors say ) not all of them are violent, so we don't exterminate all KKK & American Neo-Nazis (especially since genocide is normally considered to be a bad thing). IN the same way, simply a group being anti-American is not a good reason to attack them, especially after we created so many enemies around the world with our foreign policy. Reagan with his death squads has certainly created anti-American ideology in South & Central America AND they are certainly not Muslims.

These statistics explain why Obama is suddenly taking action in Syria.  (GOP-Republicans create their own reasons to take action)

If 65% of people did not support airstrikes in Syria Obama wouldn't have made them. It's that simple.

So, given how the media manipulates public opinion, it's the media's fault whether Obama takes action or not on any particular issue.

I think Obama is just following what his Generals are saying about their past actions and their chances of success. Here is a quick look at some of their accomplishments in those two countries;

Petraeus and the signature of U.S. terror: The CIA pressures Obama to step up indiscriminate attacks in Yemen

The United States should be encouraging non-violence in Yemen, respect for human rights and the rule of law. Instead, we have engaged in lawless violence, denying our own citizens fundamental due process.

This sort of model of response will probably gain ISIS/ISIL SOME recruits, from the poor & disenfranchised or just plain crazy,  but not many.

An all Christian coalition will probably play into ISIS/ISIL propaganda. Telling Arabs States we are sorry for the years of slander & smearing by Fox News might help. Putting Dick Cheney in prison, where he belongs, would help mend public relations with a whole host of countries, Muslim & Christian.


Note: Since this Daily Show video, almost 40 countries have endorsed the campaign.

Using the actions of  4 guys in contrast to the one guy (Andre) or the Neo Nazi/KKK groups, GOP/Fox-News is smearing a billion people.

Historical tidbit: The Ku Klux Klan, a white supremacist group, was designated a terrorist group in 1871 by Congress.

After all these years, KKK/Neo-Nazis is not so terror oriented is it? Or is it?