Surprising that Warren didn't do the honorable thing and endorse & help Sanders, but I've come to expect cowardice from Democrats so I'm not disappointed. Watch Warren get smashed...

Comments on Screenshots from above video;

I don't understand what everyone is so upset about. He had the money to attempt many sales ventures and find out what works and what doesn't work. In sales you find a product and market it under your label/brand. Most of society functions on that principle.

Personally, I don't get why a person of his wealth would attempt a non-accredited University. It's just too risky. If they don't get to be millionaires or billionariers they can sue but if it's an accredited university then it's just a course they are taking and not 'the magic key to wealth' (we all know birth is a factor right? Both Trump & Hillary come from very wealthy families and have known nothing but wealth all thier lives. That's how Hillary can take so many positions on TPP and still tout "Free trade" cause she believes she can beat Trump so easily that she can go with a policy that is bad for American workers - but not for already wealthy corporations - many of whom happen to be her donors -  and win anyways and thus she has a "mandate" to do what she thinks is in our best interests on the TPP, like Obama did. OK. Moving on.)

CBS: At the televised town hall later Monday, Sanders acknowledged that Clinton has adopted some of his viewpoints on issues like trade.

"I think Secretary Clinton is catching on to where the American people are," he said. "She's evolved on the Keystone pipeline. She's evolved on TPP... She's apologized for [her vote for] the war in Iraq."
While there's "some satisfaction" in seeing Clinton take more liberal positions now than she has in the past, Sanders said, "Will she be apologizing 20 years from now for actions she takes today?"
i.e. Clinton supports bailouts/bankruptcies for the rich ...  it's just the poor that shouldn't get away with debt. So I don't understand why Warren thinks this is a point.

This is standard rhetoric for the GOP from every liberal. It means nothing EXCEPT that they forgot what the rest of the GOP is doing. Fortunately, memories in the media barely last an hour.

Reminder: This is standard rhetoric against the GOP online (and all the above was said about Mitt Romney in the last election cycle, probably true, but still, STANDARD liberal rhetoric) 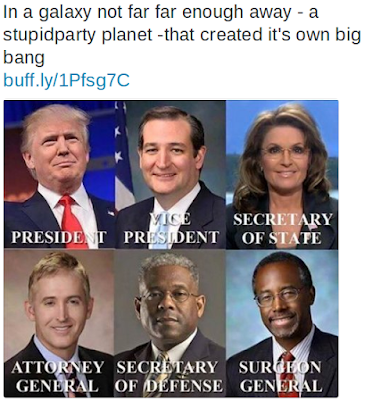 I don't know what you are talking about. I haven't underestimated his campaign. I'm just surprised there hasn't been more of an outcry on the left about Hillary. It's not like Elizabeth Warren ever did the right thing and endorse Bernie Sanders did she? Why is that? 9/11 would be my guess.

Clearly, being polite is more important than being truthful when you are a politician.

Hillary VS Trump: A Polite Person With A Record VS A Rude Person Without A Record. Lets See What That Might Look Like Shall We?

O! I got another one! Lets do a repeat

Warren: America is built of values like decency, community & concern for our neighbors...

Like when we killed all the Native Americans to clear out the country for us decent folk.

Or like when Hillary passionately advocated to bomb Iraq for being a country of colored people (she had the decency to clear out the riff raff to make it safer for us decent folk by killing 1.2 million people... what? Technically they are not neighbors, they are far way). Yes, she did say it was a mistake, i.e. her PASSIONATE support of the Iraq War (& crime bill) was a mistake. It's not like she wasn't doing the decent thing for her neighbors (getting rid of colored people). Killing people is how KKK/Kissinger/Hillary show thier neighborly concern. May we never have such people are neighbors! (BTW, anyone notice that Hillary's mistakes cost thousands of people's their lives... in a decent way of course)

Or like when Hillary bombed a bunch of pesky brown people - women and children - for being in the same alleged area as a possible terrorists. She bombed weddings. Hey, it's how we show our neighbors how decent we are.

O! This will be fun!


Don't Like Trump? Watch Donald Trump Get Roasted On Comedy Central By Seth MacFarlane & Others

Hillary believes in free trade (i.e. what's in our best interest even if we have to suffer for it) and take money from Wall Street to say she won't remove the glass-steagal act (something which Warren didn't like but against a rude person... rude person beware!) and she has a problem with Trump's being authoritarian? This is gonna be one trippy election cycle.

Absolutely. Do tyrants come from the same family or am I understanding the word "tyrant" wrong. There are two types of tyrants, benevolent ones and mean ones... I'm guessing Warren is hoping this ex-President's wife with his weird record will be a non benevolent tyrant. It's not like we should vote outside of the family, our rulers and confidants.

About this weird obsession the left seems to have with the Clinton's that they are willing to elect one for the second time. Get a life. Pick someone from a different family. This is America for chrissakes not England with it's Constitutional Monarchy.
Talk about America's new obsessions with electing one family like it's royalty (Jeb has since dropped out but Hillary continues on)...

Jeb vs. Hillary: The race America deserves? - Chris Hayes explains why a general election between two dynastic candidates-- Jeb Bush and Hillary Clinton -- would hold up a mirror to the state of American democracy.