Is Hillary Clinton Really A Feminist?


Hillary Clinton says she will stand for women. I guess she means rich women. 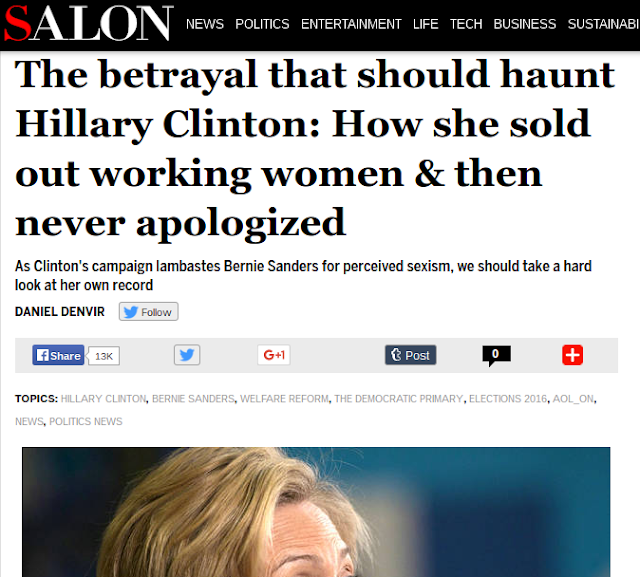 She made it clear she doesn't stand for poor black women and, well, she bombs brown women and children (I think she calls it "success"... & Yemen has been destabilized with State Dept antics, ... exactly what a Henry Kissinger or Cheney-Bush strategy would look like... coincidence?)


Here are extracts from a collection of articles that challenge the idea of Hillary's "feminism" i.e. her 'feminist credential';

Hillary Clinton is not alone: Around the world, many female heads of state have attained their positions through marriage or bloodlines. While it is common for a woman to advance in this way, it is neither interesting nor feminist.
Speaking of that relationship, Clinton has been trying hard to portray herself as a friend of labor unions this primary season. In Las Vegas, support from unions was critical to her success. (This was sometimes accompanied by deceptive tactics. For example, the Service Employees International Union distributed flyers painting Clinton as a supporter of the Fight for $15, a national campaign to raise the minimum wage to $15 per hour. In fact, her Democratic primary opponent supports this demand, while Clinton has made clear that $12 would be just fine as a federal minimum.) Yet Walmart is also one of the most adamantly anti-union companies, notorious for violations of workers' right to organize. This, too, is a feminist issue: The majority of Walmart's workers are women, and union membership has been found to be one of the best ways to reduce workplace sex discrimination. In addition, most low-wage workers are women, so just allowing more workers the opportunity to join unions would greatly improve women's wages and working conditions. While Clinton was on Walmart's board, there is no evidence that she tried to change the company's policies on unions, nor has she reflected on that issue since then.
Clinton's feminism is not only elite, but also white and often explicitly racist. Recently Ashley Williams, a young Black Lives Matter protester, interrupted Hillary Clinton's speech at a $500 per person fundraiser, holding a sign that read "We Have to Bring Them to Heel," a direct quote from Clinton, referring to young black people in a 1996 speech on the crime problem. Williams said to Clinton, "I am not a 'superpredator,'" and asked Clinton why she had used that word. An affronted Clinton responded rudely and dismissively, and Williams was quickly escorted out. Clinton later said she regretted her 1996 choice of words, but her record goes beyond name-calling and racist language: During her husband's administration, she strongly advocated for policies that contributed to the mass incarceration of Black communities, as historian Donna Murch wrote recently in the New Republic.
During the Clinton administration, speaking about sexual harassment accusations against moderate Republican Sen. Bob Packwood, a needed ally on health care, Hillary Clinton grumbled to a friend, who later described Hillary as "tired of all the whiny women."
Hillary Clinton's mudslinging and slut-shaming campaigns against women who claimed to have had consensual sex with her husband are well documented. In his memoir, George Stephanopoulos, quotes Hillary Clinton as saying of one such woman, "We have to destroy her story." Hillary biographer Carl Bernstein describes Hillary directing an "aggressive, explicit" campaign to discredit Gennifer Flowers, an actress who said she had a long affair with Bill Clinton. She referred to Flowers as"trailer trash." In a tough 2008 essay for Slate, Melinda Henneberger and Dahlia Lithwick wrote that Clinton "consistently relates to and protects and stands with the oppressors in the gender wars ... she invariably sees [Bill] as the victim, preyed upon by a series of female aggressors."

Salon: “Sexism has nothing to do with it”: Camille Paglia on Hillary Clinton, Gloria Steinem — and why New Hampshire women broke for Bernie Sanders Sanders' thrilling win dealt Gloria Steinem and old-guard feminist establishment a loss. But it wasn't about sexism

With Bernie Sanders’ thrilling, runaway victory over Hillary Clinton in the New Hampshire primary, the old-guard feminist establishment in the U.S. has been dealt a crushing blow.
Despite emergency efforts by Gloria Steinem, the crafty dowager empress of feminism, to push a faltering Hillary over the finish line, Sanders overwhelmingly won women’s votes in every category except senior citizens. Last week, when she told TV host Bill Maher that young women supporting the Sanders campaign are just in it to meet boys, Steinem managed not only to insult the intelligence and idealism of the young but to vaporize every lesbian Sanders fan into a spectral non-person.
Steinem’s polished humanitarian mask had slipped, revealing the mummified fascist within. I’m sure that my delight was shared by other dissident feminists everywhere. Never before has the general public, here or abroad, more clearly seen the arrogance and amoral manipulativeness of the power elite who hijacked and stunted second-wave feminism.
The next day, Hillary was accompanied on the campaign trail by former Secretary of State Madeleine Albright (a Bill Clinton appointee), who proclaimed, to Hillary’s laughter and applause, “There’s a special place in Hell for women who don’t help other women.” Waspishly policing the earth was evidently insufficient for the feminist politburo, who are now barging into the salvation and damnation game.
Never mind that the woman elevated to Christ Redeemer status by Steinem and Albright has a stained and tattered rap sheet five miles long. What genuine principles does Hillary have left, after a public career so light on concrete achievement and so heavy with lies and greed? Yes, she’s been handed job after job, but primarily due to her very unfeminist association with a man. As a senator, she initiated nothing of substance, and as Secretary of State, she stumbled into one disastrous fiasco after another, escalating the destabilization of North Africa and the Mideast.
I enthusiastically support and contribute to Bernie Sanders because he is a man of conviction who speaks from his heart and who does not need paid pollsters and a giant, obsequious, royal staff to tell him what to say or wear every day. He articulates a vision of social justice that should be at the core of the Democratic party, which has become far too cozy with big donors and corporate lobbyists over the past half century. Hillary Clinton, in contrast, is a time-server and trimmer who cynically panders to every audience and who shuffles through policy positions like playing cards.


Salon: The truth about Hillary Clinton’s “problem” with women: In reality, men in New Hampshire also rejected her in droves and backed Bernie Clinton's performance with female voters in New Hampshire isn't a surprise, and isn't a rejection of feminism

Once the mainstream media gets hold of a titillating catfight narrative, there is prying them off it, it seems. In Tuesday’s New Hampshire Democratic primary, Bernie Sanders won the majority of female voters, at 55 percent, and you could practically hear the drool hitting the page. “Clinton Falters With Women in New Hampshire Amid Gender War” reads the headline at NBC News. Young women’s high support for Sanders is of special interest. You’d think this was a story about a nubile mistress making a grab for her man while shoving the first wife out of the way, instead of a story about something as unsexy as voting.


Salon: “Trust me it’s not just about having a vagina”: Young women aren’t listening to older feminists’ “ignorant” pleas to vote based on gender The college students we interviewed were overwhelmingly feeling the Bern

“We can tell our story of how we climbed the ladder, and a lot of you younger women think it’s done,” Ms. Albright said in New Hampshire. “It’s not done. There’s a special place in hell for women who don’t help each other!”

But young college students at New York University aren’t buying the logic — some even called it “ignorant.” Others just want to think for themselves.
“Women should be able to vote for whoever they feel is the best candidate,” one student said.

The comment came at the end of an exchange sparked by a question from University of South Carolina student Dennzon Winley. “As we have learned in Iraq and, recently, Libya,” Winley noted, “getting rid of long-time dictators and their affiliates can lead to problems unforeseen.” He then asked Clinton how she’d ensure that regime change in Syria would “install within that country a government capable of containing and mitigating the sectarian and insurgency violence that will undoubtedly increase, thus further destabilizing the region?”
After addressing a potential ceasefire in Syria and the need to stop Russia’s bombing in that country, Clinton turned to Libya. She boasted of the election held in the country in 2014, describing the moderates elected. She then suggested the country needed some time and support to get over internal disputes. “I’m hoping that we can give them the time and space to actually make a difference for their country in the future,” she said.
“How do you explain the time and space to people?” debate moderator Chris Cuomo asked in response. He then asked Clinton to assess one of the key efforts from her tenure as Secretary of State: “Maybe we shouldn’t have done it that way. Do you believe there was a mistake involved in Libya?”
After pointing to the election again, Clinton then invoked the half-century-plus deployment of U.S. forces in Germany, Japan, and South Korea as examples of U.S. troops remaining onsite to give a country time and space, with a particular emphasis on the latter. “If you think about South Korea, there were coups, there were assassinations, there was a lot of problems for the Koreans to build their economy, to create their democracy,” she described. “This doesn’t happen overnight, and yes, it’s been a couple of years,” she said, returning to the five years since Libya’s overthrow of Qaddafi in 2011. “I think it’s worth European support, Arab support, American support, to try to help the Libyan people realize the dream that they had when they went after Qaddafi.”
In response to a question about what she meant about time and space (and a question about whether regime change that has led to chaos was a mistake), Clinton responded by raising deployments that have lasted upwards of 60 years.
Meanwhile, while Bernie Sanders may be recommending the U.S. adopt domestic policies that match those of our Canadian and European counterparts, thus far he has mentioned nothing about 60-year military deployments. Moreover, unlike Sanders, Clinton has not even called for taxes to pay for what would be a costly endeavor — unless her reference in this exchange to Libya’s oil means she hopes to be more successful billing Libya for defense than the U.S. has been with Iraq.
Such is the nature of our politics that Sanders can be attacked as a fantasist for daring to aspire to live as well as Europeans, while 60-year military deployments get treated as magic ponies that cost nothing.