Is Hillary Clinton The Mitt Romney Candidate Of 2016?

Hillary Is NOT A Progressive AND She Lies ALOT 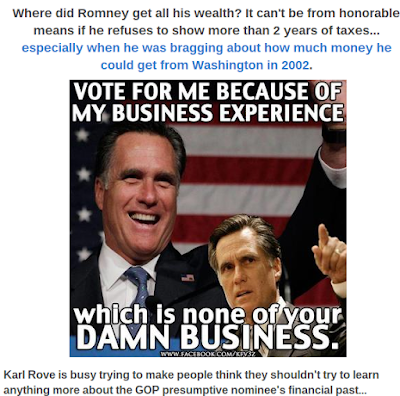 The ONLY candidate she is running against is BERNIE SANDERS. Bernie Sanders has repeatedly said he'll release his transcripts 'here they are' acting as if he is tossing invisible transcripts to her intending to say he has none (without actually saying that I AM THE CANDIDATE YOU ARE FACING SECRETARY CLINTON WHICH CANDIDATES ARE YOU REFERRING TOO? IMAGINARY ONES? THIS IS A DEMOCRATIC PRIMARY SECRETARY CLINTON, WHICH CANDIDATE ARE YOU REFERRING TO? WHY DON'T YOU DEAL WITH US FIRST RATHER THAN SOME HYPOTHETICAL CANDIDATE?). I'm guessing most people think he's saying 'I'll never release my transcripts' by tossing invisible scripts at her. If all Bernie does is release invisible transcripts then that's what Hillary will do as well.

If Hillary Clinton ever releases those transcripts we may have another Mitt Romney like moment, i.e. the 47% thing;

How is Hillary gonna spin this in the General Election? Does Mitt Romney's infamous "We Build It" strategy comes to mind? Just more ways Hillary & Mitt Romney look to be the same.  BTW, Mitt Romney DID take "bail outs" so it makes perfect sense for him to support her.


Another very Mitt Romney thing was her support of the TPP or like they like to spin it "free trade" which works out very well for the rich (& has since her Husband implemented NAFTA, TPP's source) which is also a very Mitt Romney like thing i.e. pushing policies that help the rich at the cost of the lives of those who are less well off than them (i.e. 'the peasants').


Lets look at the Iraq War.

Mitt Romney says 'I stand by Bush and the fact that Bush does not and never did lie'.  (Article quote: He ... defended the honesty of George W. Bush.)

Yet we have tons of proof of Iraq War lies and media coverup not to mention Hillary Clinton very public AND passionate support of the Iraq War invasion (since then she has said 'it was a mistake' but not much else such as why Cheney made millions and Halliburton Billions off Iraq oil, something is very amiss there... it's clear Hillary would have continued to support her pro-Iraq war vote passionately if democrat public opinion hasn't changed).

Mitt Romney supported the Iraq War and apparently still does. Hillary & Mitt are not that far off.


Mitt Romney & his people have already come up with a strategy to turn over the win to the democrats by trying to hold back the Republicans from uniting behind Trump.

Mitt Romney's strategy can be summarized as a variation of the political strategy in the movie Brewsters Millions for a person that DOESN'T want to win in the general election;

Who does this strategy help but Hillary Clinton?

Could Hillary Clinton be the Mitt Romney candidate of 2016?