In India It Is Said That If A Goat Thinks Of God He Probably Imagines It To Be Just Like Himself, i.e. a Goat. Is That Why White People Think Jesus Was White?

In India it is said that if a Goat thinks of God he probably imagines it to be just like himself, i.e. a Goat. After watching bits of all these TV specials all I can say is that the Indians are right. Westerners (Caucasians) tend to see all of 0 AD as white! Here is evidence that Jesus and Israel of 0 AD probably wasn't white (you guys know the new influx of white Jews into Israel comes from Europe after WW2 right?) 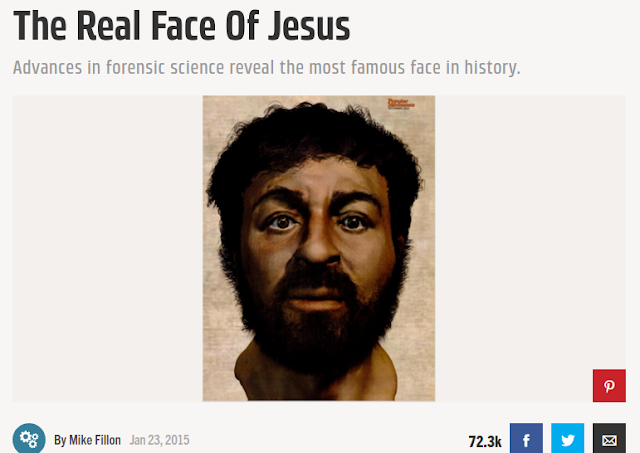 Here is the standard crap that media feeds us, day in and day out, calling it 'cutting edge' news/documentary etc.
CNN; 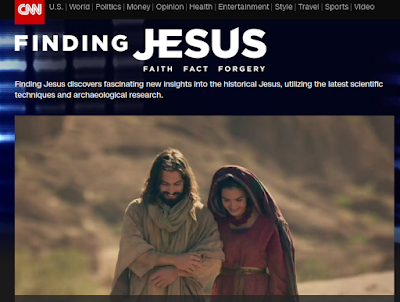 Article from The Atlantic: 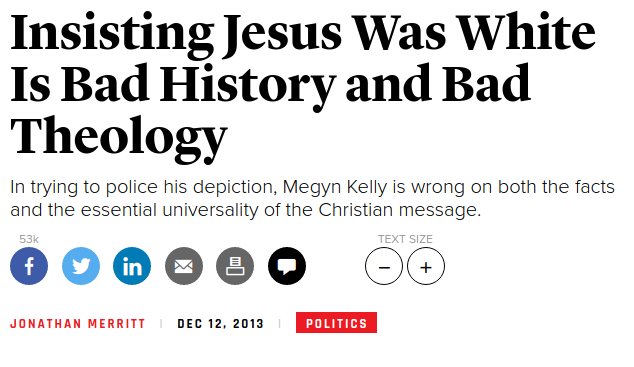 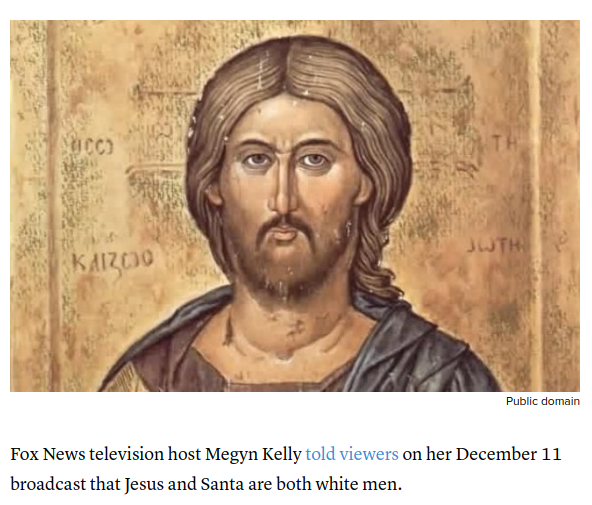 WorldViews: What, as far as we know, did Jesus look like? What do we actually know about him?
Reza Aslan: Well, what we know about him is that he was Galilean. As a Galilean, he would have been what is referred to as a Palestinian Jew. He would look the way that the average Palestinian would look today. So that would mean dark features, hairy, probably a longer nose, black hair. To put it in the simplest way possible, he would've looked like me. [Laughs]
You're very modest.
But I want to make a larger point, which might be interesting to you or may not be interesting. What I just described is Jesus. What Megan Kelly described is the Christ. And they're different people! In other words, the Christ can be whatever you want him to be.
When you go to, for instance, the Church of the Annunciation at Nazareth. They have commissioned Christian communities from all over the world to paint a depiction of Jesus and his mother Mary. They've displayed all those paintings, and when you look at, for instance, the painting from the United States, what you see is a blonde and blue-eyed Jesus.
When you look at the painting from Guatemala, what you see are Jesus and Mary as migrant farm workers. I don't mean they look like migrant farm workers I mean they are migrant farm workers. When you look at the painting from China, Jesus and Mary are Chinese, literally Chinese. When you look at the painting from Thailand, Jesus and Mary are blue, as though they are Hindu gods.
So, it's a much more interesting issue that arises from her statement: Megyn Kelly is right. Her Christ is white. 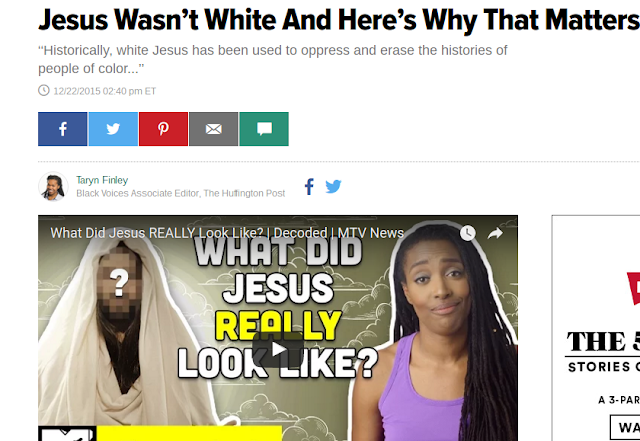 It wasn’t until the Middle Ages when artists began depicting Jesus as white because Christians didn’t like the idea of Jesus having Jewish features, even though he was Jewish. Ramsey also said that many speculate that Biblical passages that referred to lightness symbolizing purity and darkness symbolizing sin and evil played into how people perceived Jesus’ appearance.
“Again, we see this narrative of dark skin people being bad, thus needing to be tamed or killed in order to confirm to the good, or white, standard,” Ramsey said.
She touches on the notion of white supremacy being used in Christianity to colonize and control before and during slavery. Despite white people using Christianity to justify their wrongdoings, black people found their own way of practicing it to seek liberation.

Historically, white Jesus has been used to oppress and erase the histories of people of color in a way that Korean Jesus or black Jesus has not.Franchesca Ramsey

Ramsey’s point isn’t that Christianity is bad because it’s been misused to oppress. But rather that white power structures excluded images of Jesus with a darker complexion to spread racial bias.
Note: The GOP & Kissinger (since Nixon) have been using the same tactic. Hillary used it to help pass Bill's right wing crime bill and again with Obama in 2008(I don't think he cares anymore, which is a good thing. Not so sure Hillary doesn't want revenge on Obama though). The Nixon-Kissinger-KKK-Hillary/Bill connection is so strong that calling the current Democrat Establishment a moderate White Supremacist cult would be accurate. (Hillary & Bill should be treated as one person given thier political action history and thus what she is going for now would be best seen as a "third term")

Here is Hillary's friend & advisory who was with Nixon as he pushed racist policies with a bent towards mass-murder/genocide;

﻿Nation:  Henry Kissinger, Hillary Clinton’s Tutor in War and PeaceLast night, Clinton once again praised a man with a lot of blood on his hands.
﻿ Let’s consider some of Kissinger’s achievements during his tenure as Richard Nixon’s top foreign policy–maker. He (1) prolonged the Vietnam War for five pointless years; (2) illegally bombed Cambodia and Laos; (3) goaded Nixon to wiretap staffers and journalists; (4) bore responsibility for three genocides in Cambodia, East Timor, and Bangladesh; (5) urged Nixon to go after Daniel Ellsberg for having released the Pentagon Papers, which set off a chain of events that brought down the Nixon White House; (6) pumped up Pakistan’s ISI, and encouraged it to use political Islam to destabilize Afghanistan; (7) began the US’s arms-for-petrodollars dependency with Saudi Arabia and pre-revolutionary Iran; (8) accelerated needless civil wars in southern Africa that, in the name of supporting white supremacy, left millions dead; (9) supported coups and death squads throughout Latin America; and (10) ingratiated himself with the first-generation neocons, such as Dick Cheney and Paul Wolfowitz, who would take American militarism to its next calamitous level. Read all about it in Kissinger’s Shadow!


Here is Hillary doing her thing following his advice;

Are things gonna get better? Well, not for colored people. Not with Hillary & Kissinger & the new reformed psycho Bill, in charge. Even Obama's more moderate approach on mass murder of brown people is not a solid thing; 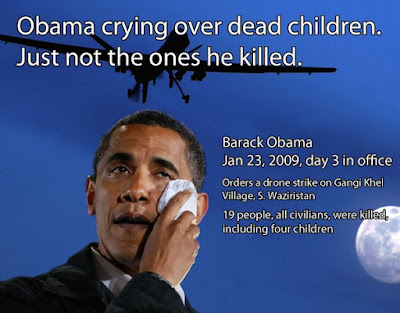 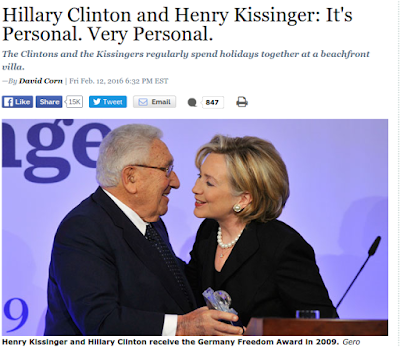 This campaign tussle over Kissinger began a week earlier, at a previous debate, when Clinton, looking to boost her résumé, said, "I was very flattered when Henry Kissinger said I ran the State Department better than anybody had run it in a long time. So I have an idea about what it's going to take to make our government work more efficiently." A few days later, Bill Clinton, while campaigning for his wife in New Hampshire, told a crowd of her supporters, "Henry Kissinger, of all people, said she ran the State Department better and got more out of the personnel at the State Department than any secretary of state in decades, and it's true." His audience of Democrats clapped loudly in response.


The Mystery Of The Media