Even Obama Wouldn't Trust Hillary Clinton With Trade Agreements Such As NAFTA & The TPP (& Obama Negotiated ON The TPP In Secret!)

The following proves that Hillary Clinton can't be trusted on the TPP (or any trade agreement where citizens well being is concerned). Frankly, even Obama turns coward when faced with establishment politics and economics and negotiated the TPP in secret to not piss them off. The fact that Obama will follow the establishment's lead on many things makes Hillary Clinton highly questionable as a candidate for a better future as she likes to claim because whenever Obama does go with the establishment it has ALWAYS been bad for the GENERAL WELFARE but good for a few rich people. The fact that Hillary Clinton is a liar is already a well known fact (though not covered by the media). This post intends to push this point home, i.e. Hillary Clinton has NEVER been a truth teller! Hillary Clinton is the Mitt Romney Candidate of 2016! Lets begin... 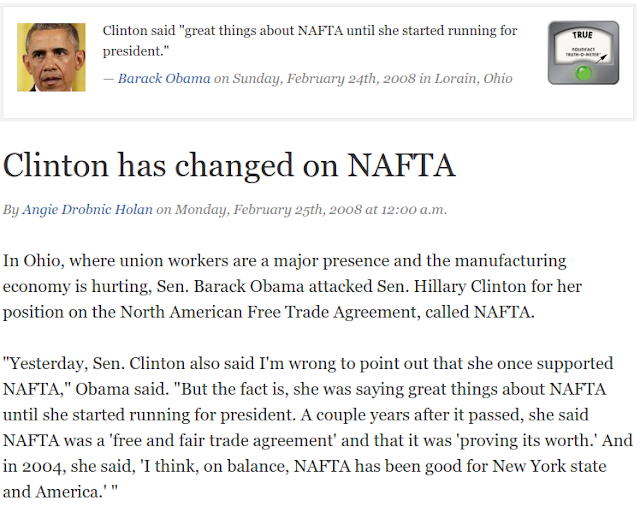 Obama: "Hillary Clinton is a LIAR"

The TPP is based off of the Clinton's NAFTA and is designed what all such policies are designed to do, give all rich people a chance to compete for the worlds labor at prices that suggest there are no national borders and thus no standards.

Politifact: Hillary Does A Full Flop On Policies She Helped With In Her Husbands Turn At The Presidency; 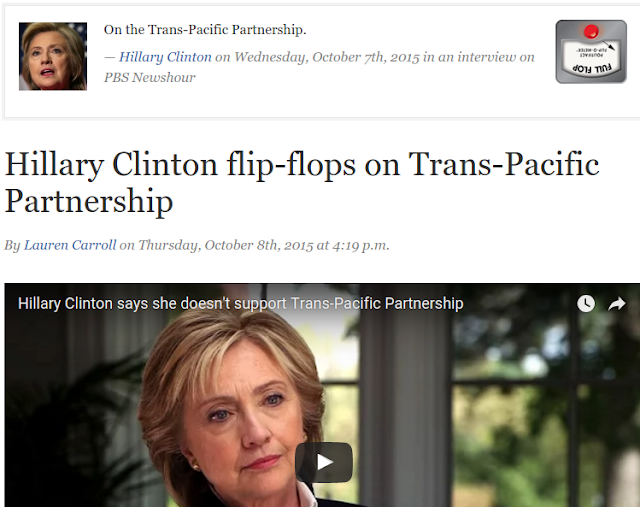 Salon: Trans-Pacific Partnership: Written by and for the rich to further enrich themselves at our expense Don't be fooled by the reports gushing that TPP will increase real incomes in the U.S. They don't mean your income

But that reality hasn’t stopped their PR campaign, pitching their “salad” as good and good for you! For example, a recent article touted a study blaring the happy news that TPP will increase real incomes in the U.S. by $133 billion a year. Even if that were true (and plenty of other studies show that it’s not), it’s a statistic meant to dazzle rather than enlighten, for it skates around the real bottom line for the American public: An increase in income for whom?
Fine, but who’s behind that? We’re not told, even though that information is key to understanding the upbeat interpretation of the TPP trade scheme. Readers would likely be less reassured by the positive spin if they knew that the Peterson Institute is largely funded by the major global corporations that would gain enormous new power over consumers, workers, farmers, our environment and the very sovereignty of America if Congress rubber stamps this raw deal. In fact, many of the multinational giants financing the institute were among the 500 corporate powers that were literally allowed to help write the 2,000-page agreement they’re now trying to shove down our throats — including Caterpillar, Chevron, IBM, GE, Deere & Company, General Motors and the U.S. Chamber of Commerce.
Oh, and what about this Peterson guy — is he some sort of unbiased scholar? Hardly. Pete Peterson is a Wall Street billionaire, one of the 400 richest people in the country, and the founding chairman of his eponymous institute. He’s also a reactionary, anti-government, anti-public-spending ideologue who was Nixon’s commerce secretary. Hailed by the establishment as one of “the most influential billionaires in U.S. politics,” he uses that influence (and his fortune) to demonize such for-the-people programs as Social Security and to push policies to further enrich and enthrone the billionaire class over the rest of us. TPP would be his ultimate political coup against us commoners.

We don’t need any institute to tell us who would benefit from TPP. All we need to know is that it was negotiated in strict secrecy with global corporate elites while we consumers and workers were locked out. Remember, if you’re not at the table, you’re on the menu.
Don’t be bamboozled by glittery studies. TPP was written by and for the superrich to further enrich themselves at our expense, exacerbating the widening gulf of inequality in America. For information and action tips, go to Public Citizen’s Global Trade Watch at www.citizen.org/trade.


Politifact on Hillary's 'half lie' (they are being generous) about the TPP; 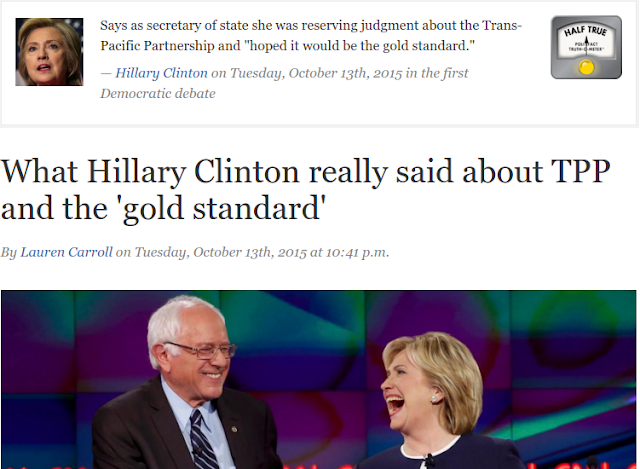 In Australia in 2012, Clinton delivered remarks on the general topic of the U.S.-Australia relationship. Here’s everything she said about the TPP in that address, with the "gold standard" comment in bold.
"So it's fair to say that our economies are entwined, and we need to keep upping our game both bilaterally and with partners across the region through agreements like the Trans-Pacific Partnership or TPP. Australia is a critical partner. This TPP sets the gold standard in trade agreements to open free, transparent, fair trade, the kind of environment that has the rule of law and a level playing field. And when negotiated, this agreement will cover 40 percent of the world's total trade and build in strong protections for workers and the environment."
So it seems Clinton is saying the TPP does, definitevely set the gold standard -- as opposed to Clinton hoping it will.

TPP & NAFTA was started by Bill Clinton & Hillary Clinton to help the rich, as thier administration is known to have done. What Hillary Clinton is trying to do now is to return to the White House so she can steal more of the countries future & turn it over to the rich. Yes, Hillary Clinton is deeply connected to the KKK, but these are "high class" KKK, they would kill low class KKK in a heartbeat, if it served thier needs as 'lack of money means you are a peasant and if peasants were meant to have good lives or were worthy of anything then they would have been born rich like I was. God Blessed us with wealth to rule the world and make everyone else subservient to me'. Simply the fact that all her policies and approaches to politics are aristocratic in nature should be enough to disqualify her to run for the Presidency.