Other ways this joke can be used is;

'You got a big car... compensating for something'

'That's a big ice cream cone you eating there..."

'You got a big show... compensating for something'

'Why so you stand to tell jokes while Jon Stewart sat down? Are you saying you bigger than him?'


I could go on forever.

Next, Donald Trump joins it;


DONALD TRUMP THROWS THE GOP INTO CHAOS MARCH 7, 2016 - As Donald Trump inches closer to the White House, establishment Republicans try to block him from winning the GOP presidential nomination without upsetting voters. (7:35)

Mediate: Trevor Noah tonight riffed on Donald Trump‘s dick and the Republican efforts to cockblock him from the general election. He was a little thrown by Trump joking about his manhood, but explained that it’s not really his dick that’s huge, “it’s someone else’s huge penis and Trump just licenses his name on it.” Noah proceeded to them examine just how desperate the Republicans are to prevent Trump from being the nominee, including undermining that whole “every vote counts” thing… but they’ll still support him if he’s the nominee.

And so, Noah concluded that yes, Trump has a big dick after all, because he’s using it to “fuck the entire Republican party.”

Then Hillary seems to have decided to join in the act; 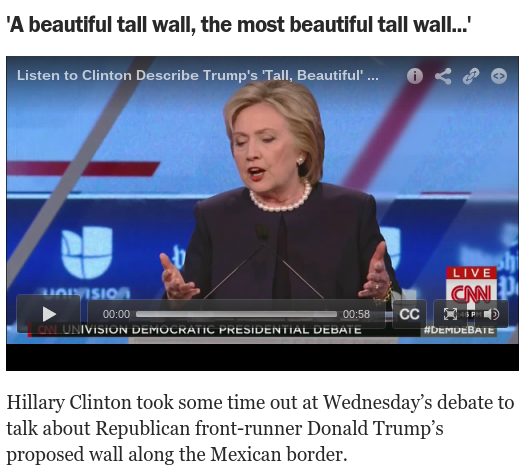 Time: Hillary Clinton may have been facing Bernie Sanders at Wednesday’s debate, but in reality she was shadowboxing Donald Trump.
The Republican frontrunner, who was the only GOP candidate who had supporters rallying in front of the Democratic debate, was the 800-pound gorilla in the room. He was named outright more than a dozen times, and referenced in the answers that didn’t refer to him directly.
In responding to questions about billionaire businessman, Clinton gave hints of what her general election strategy might look like. She mocked Trump’s “beautiful tall wall” and derided his divisiveness. She drew clear differences in their trade and climate strategies. And Clinton portrayed herself as earnest and wonky and positive, running “an inclusive campaign,” versus the real estate mogul she said profits from promoting divisiveness.

Are Dick Jokes in prime-time election debates the new norm?