Hillary Clinton's Vote For The Iraq Oil War PROVES She's Too Incompetent To Be President, At Least One With Heart

Background:
Sanders Questions Clinton's Judgement in Voting for Iraq War"We both looked at the same evidence about the wisdom of the war... on of us voted the right way."


OK. The fact that the Iraq War was for oil is a fact. There are other facts that Hillary Supporters might find surprising...

Summary:
We know the Iraq War was for oil based on documents of the time; 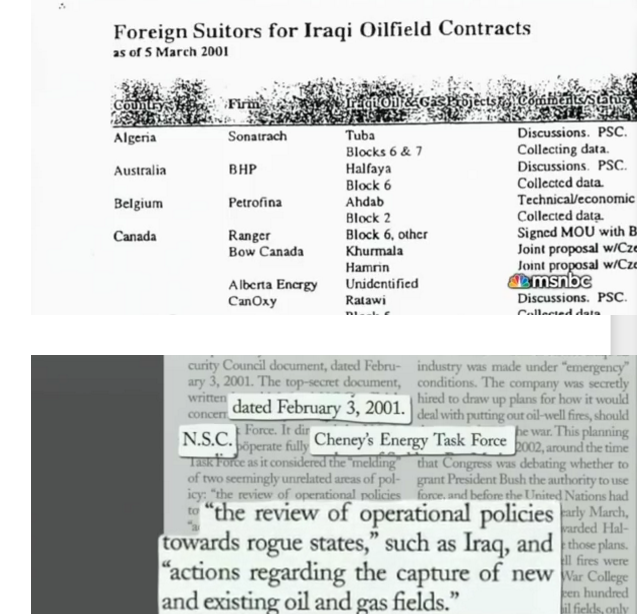 ... and we know Halliburton made a ton of money off of the Iraq War and the deaths of 4000+ US Citizens (soldiers) and over 100,000 kills (not to mention its aftermath and side effects, just saying, since media hosts are often careful not to mention this, i.e. true cost of the Iraq War, except for maybe Chris Mathews, while Rachel Maddow seems to be worried about her corporate card or lack of it. God knows what else is going on). 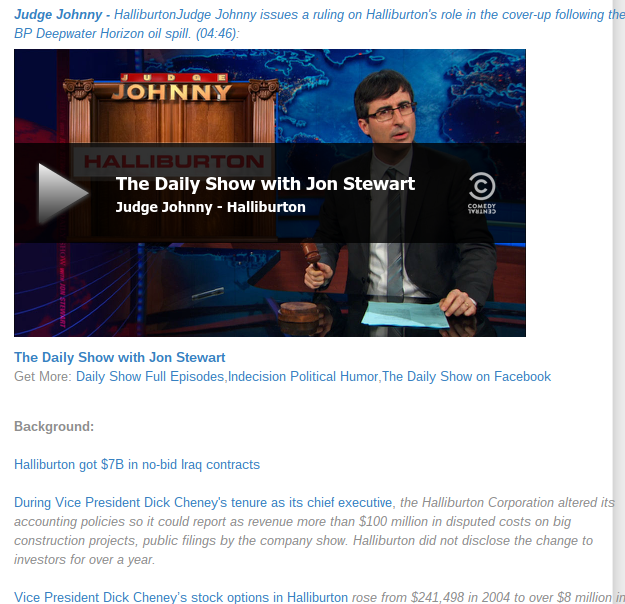 Might seem like a steep price to someone who values the life of humans. But Bush & Cheney were clearly not one of them. Neither was their adviser, Henry Kissinger... who is also friend to Hillary Clinton.

﻿Nation:  Henry Kissinger, Hillary Clinton’s Tutor in War and PeaceLast night, Clinton once again praised a man with a lot of blood on his hands.
﻿ Let’s consider some of Kissinger’s achievements during his tenure as Richard Nixon’s top foreign policy–maker. He (1) prolonged the Vietnam War for five pointless years; (2) illegally bombed Cambodia and Laos; (3) goaded Nixon to wiretap staffers and journalists; (4) bore responsibility for three genocides in Cambodia, East Timor, and Bangladesh; (5) urged Nixon to go after Daniel Ellsberg for having released the Pentagon Papers, which set off a chain of events that brought down the Nixon White House; (6) pumped up Pakistan’s ISI, and encouraged it to use political Islam to destabilize Afghanistan; (7) began the US’s arms-for-petrodollars dependency with Saudi Arabia and pre-revolutionary Iran; (8) accelerated needless civil wars in southern Africa that, in the name of supporting white supremacy, left millions dead; (9) supported coups and death squads throughout Latin America; and (10) ingratiated himself with the first-generation neocons, such as Dick Cheney and Paul Wolfowitz, who would take American militarism to its next calamitous level. Read all about it in Kissinger’s Shadow!


Hillary actually bragged about her relationship with War Criminal Henry Kissinger, so lets not assume there was nothing ulterior motivating Hillary's vote FOR the Iraq Oil War as that is clearly not the case. They take advice from the same guy (Bush & Clinton).


Blog Post: Hillary Has A Relationship With Henry Kissinger. Her Link To Bush & Cheney Is Now Complete. HAHAHAHAHA


Even Bill Clinton is known to have lamented not killing innocent women and children to kill Osama Bin Laden, the day before 9/11.

LATIMES: A day before Sept. 11, 2001, former President Bill Clinton told an audience that he could have had Osama bin Laden killed, but chose not to, because an attack could have endangered innocent women and children in Afghanistan.

“I nearly got him. And I could have killed him, but I would have to destroy a little town called Kandahar in Afghanistan and kill 300 innocent women and children, and then I would have been no better than him.”

(I should point out that Obama got him with ONE Seal team. Or so I heard).

Clearly, killing innocent women and children was not a worry when Hillary Clinton voted for the Iraq War. JUST for that, she shouldn't be President. i.e. no heart


To be a good President, 'you gotta have heart';


... while this post proves, through Hillary's associations and choices,... she has none. Whether its when she lies about her foreign policy "experience" or when she pretends to have normal worries like other people because her life long experience of wealth has brought her to a point where people are expendable and can be rated on a scale of importance. Some people are simply meant to be servants, why help them when she can help her rich friends get richer? Where else should the money go but to people who know how to use it? Or so she must think, in some way or another.

The following article extracts paint an truly awful picture of the type of person Hillary is;


Of Course Clinton Has Foreign Policy Experience, But Her Experience Has Been a Total Disaster Hillary's foreign policy experience is a series of bellicose missteps.

The most commonly cited mistake was her support for the Iraq war, which is one of the main reasons she lost the nomination the first time around. But the choices she’s made after 2008 show she not only didn’t learn any lessons from that war, but has only grown more bellicose and hawkish. From advocating regime change in Libya to arming dubious opposition forces in Syria to undermining peace with Iran, Clinton has consistently been wrong on foreign policy.


When Wagner asked, "Seriously, do you think [Sanders] is at the level we need?" Maher fired back, "Fuck yeah! The guy who voted right on the Iraq War? Yes, I do."

It’s clear that Bernie Sanders has gotten many mainstream types upset. After all, he is raising issues about the distribution of wealth and income that they would prefer be kept in academic settings, certainly not pushed front and center in a presidential campaign.


Dems, stop lying to yourselves about Hillary: Sure, she “gets s*** done” — atrocious s***, that isThe argument that Clinton can navigate the nightmare of D.C. better than Bernie is simply wrong


The next line of attacks is designed to put Sanders supporters back on their heels: Clinton is a realist, warts and all, because she is a woman: “YOU DON’T LIKE THAT SHE PLAYS THE GAME? THAT SHE HAS TIES TO THE ESTABLISHMENT? FOR ONE THING, THAT’S HOW SHIT FUCKING GETS DONE. FOR THE OTHER THING, THE BIGGEST THING, A WOMAN DOESN’T GET THE FUCKING OPTION *NOT* TO PLAY THE GAME.”
To recap, Clinton voted to invade Iraq, backed job-killing trade agreements, suggested that black women on welfare were “deadbeats” who were “sitting around the house doing nothing,” called for “more police” and “more prisons” and “more and tougher prison sentences for repeat offenders,” and bases not only her campaign finances but her entire social universe on and amid the superrich who she resides among in Westchester and the Hamptons — because she is a realist who can get things done.
Or because she had to do it this way because she is a woman. Or both.
No matter Sanders’ legion of women supporters, including many outspoken socialists. This argument renders those women invisible in an effort to inoculate pro-Clinton women’s arguments from criticism.


Hillary Clinton’s self-satisfied privilege: Her Goldman Sachs problem helps explain the popularity of Bernie Sanders and Donald TrumpShe has a peculiar tone-deafness to how matters of class relate to her personally. It helps explain Sanders's rise

As a child Clinton grew up in an upper class household. Her father owned a successful business, the family lived in a tony Chicago suburb, she then went to Wellesley, Yale Law School, etc. Today she is a very rich woman married to even richer man. (Together the Clintons have a net worth in excess of $100 million).
Clinton has, in other words, spent her entire life enjoying the advantages of high to extraordinarily high socioeconomic status. Unlike her husband, she never moved into the American upper class: she was born into it, and has never been at any risk of dropping out of it.
Nevertheless Clinton sometimes makes statements that sound as if she has no awareness of her privilege: that suggest she considers herself, in some vague sense, an ordinary “upper middle class” American — one who has had to struggle with budgets, mortgages, and anxieties about how to pay for her child’s college education. A year and a half ago, as she was gearing up for her second presidential run, she gave an interview to “Good Morning America”:

She said her family “came out of the White House not only dead broke but in debt,” adding later that her family had “no money” at that time and “struggled to piece together the resources” for mortgages and her daughter Chelsea’s college education.
“You know, it was not easy,” she said.

This is complete nonsense. For example, the Clintons bought a $2.8 million house shortly before Bill Clinton left the White House, putting nearly $900,000 down in cash and getting a $1.9 million loan for the rest. The several million dollars in legal fees they owed at the time — something that would have been an economic disaster for even most very well-off Americans – were certain to be paid off almost immediately by speaking fees and book advances, which is why the “dead broke” couple was lent a couple of million bucks to buy a house, even though their putative balance sheet was negative.
“That’s what they offered,” she explained on Wednesday, when asked why she accepted $675,000 from Goldman Sachs alone.   That response carried an unfortunate echo of bank robber Willie Sutton’s explanation for why he robbed banks. “Because that’s where the money is,” he supposedly said. (This in turn brings to mind Bertolt Brecht’s remark that robbing a bank is nothing compared to founding one.)
Clinton would do well to contemplate the words of the English writer G.K. Chesterton, in response to the claim that rich politicians cannot be bribed: “The rich man is bribed; he has been bribed already. That is why he is a rich man.”


She's so heartless she might this image to understand that the kind of stuff she condoned in foreign policy (i.e. her "experience") is morally and strategically wrong. 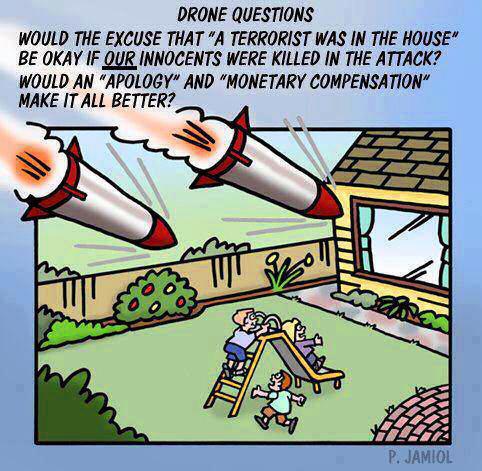 But then again, maybe not. There are poor white people too.