Hillary Clinton Joined Everybody In Mocking Wall Street AFTER The Financial Crisis Struck. A Crisis Her Husband Paved The Way For

Something that hasn't been discussed properly yet; 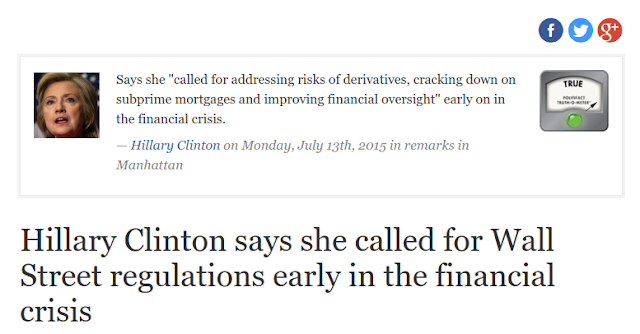 Clinton used to be the senator from New York, the home of Wall Street. She has a history of campaign backing from the finance industry and of delivering high-priced speeches to finance firms, such as Goldman Sachs. And her husband, former President Bill Clinton, signed the repeal of a bank break-up bill, the Glass-Steagall Act -- a deregulation that some critics believe contributed to the financial crisis.

Hillary Clinton says she called for Wall Street regulations early in the financial crisis, but if she was a wise decision maker she would have gone after Wall Street before they messed up; 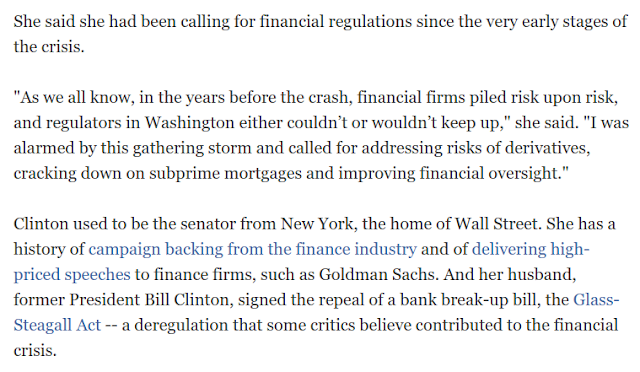 So what happened? Turns out Hillary was just joining the bandwagon on Wall Street so as not to get the ire of the people turned on her

Boston Globe: As a senator, Hillary Clinton was hands-off on Wall Street


This is normal behavior from public officials with ties to corporations, such as speaking fees;


Congress is particularly good at not getting in trouble with lawmakers over thier Wall Street related crimes. Maybe it helps that Congress ARE the lawmakers?


In any case, other related posts: