Bill Clinton does a little artful doge when asked about the Glass Steagall Act he repealed. He goes, 'Oh! You can't trace a single SPECIFIC instance that this bill's repeal caused the financial crisis'. It's like when he said 'read my lips, I did not have sexual relations with that woman'. Something like that. The fact that his boys did a good deal of the legwork leading to the eventual repeal of the Glass Steagal Act is ignored. But then, he's a documented liar, it's not his job to tell the truth. He does his job (lying) just fine.

A look at Bill Clinton's artful dodge with some so so research by Politifact (somehow they miss what a big push for deregulation Bill made and somehow Politifact has no way to measure artful dodges in their fact checks which seems rather primitive);

But Hillary Clinton won't pledge to reinstate Glass-Steagall if she becomes president. And Bill Clinton says criticism over the law’s repeal is unfounded.
"Look at all the grief I got for signing the bill that ended Glass-Steagall," Bill Clinton said in an interview with Inc. magazine for its September issue. "There's not a single, solitary example that it had anything to do with the financial crash."
Given the significant attention on Glass-Steagall among Democrats, we wondered if it’s true that it didn’t have "anything to do with the financial crash."
Our research shows the law’s demise was part of a broad deregulatory push that greatly contributed to the financial crisis. But Clinton has a point that a direct line from the 1999 repeal to the market crash in 2007-08 is hard to identify.
Congress passed Glass-Steagall in 1933, in the wake of the 1929 stock market crash that led to the Great Depression. The law kept commercial banks (where customers deposit money and take out loans) separate from investment firms (which hold securities and make investments) -- more colloquially, the law separated Main Street from Wall Street.

A few decades out from the Depression, starting in earnest in the 1970s, there was a push to roll back financial regulations that continued throughout the administrations of former presidents Ronald Reagan, George H. W. Bush, Bill Clinton and George W. Bush. As part of that movement, banks and lawmakers steadily chipped away at Glass-Steagall and took advantage of loopholes. Banks were engaging in the kinds of activity Glass-Steagall was intended to stop even though the law was still on the books.
By the time Clinton signed the Financial Services Modernization Act, commonly known as Gramm-Leach-Bliley, repealing the key components of Glass-Steagall in 1999, the regulation was nearly toothless. The law was simply catching up to what the market had already accomplished in the previous 10 to 15 years, said Kathleen Day, a lecturer at Johns Hopkins University and an expert in financial crises.
Take for example the poster child of the end of Glass-Steagall: The merger of Citicorp, a bank, and Travelers Group, a financial conglomerate, was announced in 1998 before Glass-Steagall was repealed. Even though this was the exact type of merger Glass-Steagall was intended to halt, the financial industry did not see many obstacles for the creation of Citigroup.
"Citigroup and others wanted and got the repeal of Glass-Steagall in order to validate what they had already been allowed to do," said Simon Johnson, an economics professor at the Massachusetts Institute of Technology.
So the overall, decades-in-the-making decline of Glass-Steagall might have contributed to the financial crisis and its fallout, as it was part of the deregulatory push. But Clinton putting pen-to-paper on the repeal of Glass-Steagall in 1999 probably didn’t make any meaningful difference.
But Clinton’s hands aren’t clean of the financial crisis, because his administration played no small part in the longer term deregulatory trend. Clinton and his administration did not make an earnest attempt to maintain oversight over the big, hybrid banks created by the demise of Glass-Steagall, Day said. Additionally, the administration’s firm decision not to regulate other aspects of the financial market played a meaningful role in the crisis -- for example, the absence of regulations regarding over-the-counter derivatives, which were becoming increasingly prevalent, despite internal warnings.
Clinton’s claim "might be technically true, but it’s a sin of omission," Day said.

The simple reality is that making it easier for banks to take deposits and use it however they please is bad for consumers and good for rich people who own the banks. The simple reality is that the whole regulatory scheme Bill Clinton pushed with his fiction inspired economics leader was aimed to NOT protect the avergae consumer. Or said another way, it was designed to help the few at the cost of the many... if that became necessary (bailout)... 'but these rich guys we are helping give us speaking fees etc I'm sure they won't get corrupted by having no regulations on proper procedure to obey.' Despite history proving otherwise, again and again.

But lets stop here and look at the crazy guy Bill Clinton was taking advice from... a guy who decided that a failed fiction writer (success after death for a fiction writer isn't success at all) and her crazy economic ideas from her fiction books was the way to go in structuring the economy. Afterall, she believed that the rich should help themselves and Alan Greenspan and Bill are rich... so they helped themselves.


Columbia Journalism Review: Bill Clinton on deregulation: ‘The Republicans made me do it!’ The ex-president seriously mischaracterizes his record

You know, the usual Bill Clinton interview. But Clinton’s comment about his record on regulation is an actual newsmaker, because it’s a giant whopper:


What happened? The American people gave the Congress to a group of very conservative Republicans. When they passed bills with the veto proof majority with a lot of Democrats voting for it, that I couldn’t stop, all of a sudden we turn out to be maniacal deregulators. I mean, come on. I know Senator Warren said the other day, admitted when she introduced a bill to reinstate the division between commercial and investment banks, she admitted that the repeal of Glass-Steagall did not cause one single solitary financial institution to fail.

This is, to be kind, bullshit. Memory is a hazy thing, but I have a hard time believing Clinton doesn’t know full well he’s not telling the truth here (and with his record, he doesn’t get the benefit of the doubt).
Let’s go to the tape. Clinton installed Robert Rubin and Larry Summers in the Treasury, which resulted in the Gramm-Leach-Bliley Act, which officially did in Glass-Steagall and the Commodity Futures Modernization Act, which left the derivatives market a laissez-faire Wild West (not to mention a disastrousstrong dollar policy that was a critical and underrated factor in the bubble). He also reappointed Ayn Rand-acolyte Alan Greenspan, who has as much responsibility as anyone for creating the crisis, as Fed chairman—twice.
Now it’s true that Clinton faced an extremely hostile Republican Congress for the last six years of his presidency. But his administration actively encouraged the big deregulatory legislation, and squashed its own dissenters, like Brooksley Born, who saw disaster ahead.
Clinton would have you believe that he signed those bills because his administration was forced to by a GOP that was beholden as usual to Big Business, but then what about the deregulatory legislation he signed in 1994, before Gingrich & Co. took Congress?

Going Deeper:
We had a nation of laws for everyone till the Republicans started following a fiction writer called Ayn Rand and decided to make policy based on the ideas of a fiction writer with no degrees or knowledge of anything. Alan Greenspan, specifically, decided (for an unknown reason) that throwing out decades of economic history & science and adopting the idealized 'wars between rich people' view of a fiction writer that spent the last days of her life on government support after escaping communist Russia, was the way to go. It's clear Ayn Rand believed rich rulers was a fine idea but that these rulers should be businessmen. I can see how this would appeal to someone who is rich and a businessman with hands in the government. Despite Alan Greenspan being wrong about Ayn Rand's fictional economic ideas, none of his rich buddies got hurt by the financial collapse of 2008... which was a miracle in and of itself.
First, a debunking of the fictional economics ideas of Ayn Rand (shouldn't be necessary for anyone with any education);


Ayn Rand & The Beginning Of The End Of Objectivism 1
Commentary On Ayn Rand's "For The New Intellectual" 1
Dick Cheney: The Ultimate Laissez-Faire Capitalist?

Modern Mythology: Star Wars, The Matrix & An Ayn Rand Style Rant
Next, the look at the madness that fueled the bad decision made by Alan Greenspan and Bill Clinton by enabling the GOP to destroy the economy and many citizens lives. What was thier logic? Business men are honest! Clearly, they didn't think laws have anything to do with business decisions. This belief despite the fact that millions died in slavery and people were treated awfully.
PBS: The Warning: Long before the meltdown, one woman tried to warn about a threat to the financial system;

Part of the cause of the financial crisis was the housing bubble... another thing Bill paved the way for...

Add President Clinton to the long list of people who deserve a share of the blame for the housing bubble and bust. A recently re-exposed document shows that his administration went to ridiculous lengths to increase the national homeownership rate. It promoted paper-thin downpayments and pushed for ways to get lenders to give mortgage loans to first-time buyers with shaky financing and incomes. It’s clear now that the erosion of lending standards pushed prices up by increasing demand, and later led to waves of defaults by people who never should have bought a home in the first place. President Bush continued the practices because they dovetailed with his Ownership Society goals, and of course Congress was strongly behind the push. But Clinton and his administration must shoulder some of the blame.
Video: George Bush Explains The Reasoning Behind The Housing Bubble 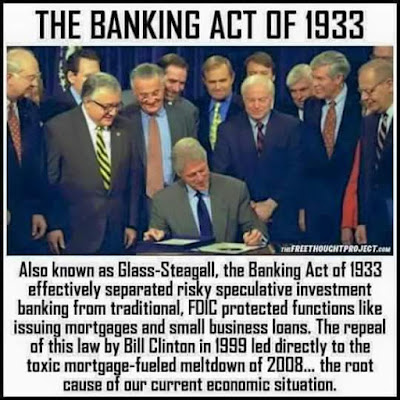 Email ThisBlogThis!Share to TwitterShare to FacebookShare to Pinterest
Labels: Bill Clinton, financial deregulation at the cost of the people