The Crime Bill Was Full Of Flaws. Yet Both Bill & Hillary Pushed It Passionately. Did They Get It Done? Yes. Was It Good? No.

First, this is old news and Bill apologized for it as it couldn't be avoided (unlike his artful dodge on the Glass Steagal Act - I'm not including lying under oath for Monica Lewinsky here as people don't care much about it and although they think Bill was lying about 'not inhaling' - or why would he say he didn't like it? - they tend to just see it as unimportant but it does reveal a pattern of behavior, i.e. one of a compulsive liar);


Bill Clinton says he made mass incarceration issue worse
(CNN)Bill Clinton said Wednesday that the crime bill he signed into law as President in 1994 worsened the nation's criminal justice system by increasing prison sentences.
"I signed a bill that made the problem worse," Clinton told an audience at the National Association for the Advancement of Colored People's annual meeting in Philadelphia. "And I want to admit it."

Now look at the havoc the Clinton's have wrought on the Nation with this (I understand some people seeing the graph as going up, and thus representing a pattern, choose to absolve Clinton's of any guilt association to it. I happen to disagree. We have an Ex-President and his wife running AGAIN. We know EXACTLY what we are going to get... if we pull off the wool of denial from our eyes);

Twenty years ago this week, in 1994, then-President Bill Clinton signed a crime bill. It was, in effect, a long-term experiment in various ways to fight crime.
The measure paid to put more cops on the beat, trained police and lawyers to investigate domestic violence, imposed tougher prison sentences and provided money for extra prisons.
Clinton described his motivation to pass the 1994 Violent Crime Control Act in stark terms.
"Gangs and drugs have taken over our streets and undermined our schools," he said. "Every day, we read about somebody else who has literally gotten away with murder."
And if Clinton and Congress reflected the punitive mindset of the American people, what they didn't know was that soaring murder rates and violent crime had already begun what would become a long downward turn, according to criminologists and policymakers.
Nicholas Turner is president of the Vera Institute, a nonprofit that researches crime policy. Turner took a minute this week to consider the tough-on-crime rhetoric of the 1990s.
"Criminal justice policy was very much driven by public sentiment and a political instinct to appeal to the more negative punitive elements of public sentiment rather than to be driven by the facts," he said.
And that public sentiment called for filling up the nation's prisons, a key part of the 1994 crime bill.
These days, Jeremy Travis is president of the John Jay College of Criminal Justice. But 20 years ago, he attended the signing ceremony for the crime bill — and joined the Clinton Justice Department.
"Here's the federal government coming in and saying we'll give you money if you punish people more severely, and 28 states and the District of Columbia followed the money and enacted stricter sentencing laws for violent offenses," Travis says.

She pushed a bad bill passionately to look good in an election. She did that recently with Bernie Sanders by talking about an AWFUL bill she passed to "help" poor immigrants. How anyone could pass such a horrendous bill is terrifying me more than anything else as this reveals a pattern of behavior and decision making that I PERSONALLY find unacceptable in a President. Some people clearly do not.


The Atlantic: Hillary Clinton and the Tragic Politics of Crime - The criminal-justice policies she now denounces once helped her husband capture the White House.

With the exception of gay rights, no public-policy debate has shifted more dramatically in my adult lifetime than the debate over crime. In 1992, when Bill Clinton flew back to Arkansas to oversee the execution of a mentally retarded African American murderer, the move helped him in New Hampshire’s Democratic primary. In 1994, Clinton’s crime bill—which among other things, expanded the death penalty, encouraged states to lengthen prison sentences and eliminated federal funding for inmate education—garnered the votes of every Democratic Senator except one.

Today, by contrast, Hillary Clinton is loudly repudiating the “tough on crime” policies that she and her husband once championed. Even more remarkably, prominent Republicans are nodding along.

To those who see Hillary’s new crime agenda as a flip-flop, her campaign has a rejoinder: Different policies make sense at different times. As Clinton spokesperson Jesse Ferguson tweeted, “HRC policy on internet might also be different than WJC policy in 1994. Not b/c he was wrong but b/c times change.”

The problem with this argument is that many of the crime policies the Clintons supported in the 1990s were probably wrong even back then. Yes, the crime bill did some good: It put more cops on the street and increased penalties for sex crimes. But it also helped spawn the very “era of mass incarceration” that Hillary now denounces. It’s not just that the bill allocated almost $10 billion in federal-prison construction money. It only allocated it to states that adopted “truth-in-sentencing” laws that dramatically increased the amount of time criminals served. As NYU Law School’s Brennan Center has noted, the number of states with such laws rose from five when the bill was signed to 29 by Clinton’s last year in office. Over the course of Clinton’s presidency, the number of Americans in prison rose almost 60 percent.


I found a post on Daily Kos attempting to debunk the private prison connection to Hillary CLinton and accidently proved that ALL of the Democrats take private prison money!;

Daily Kos: Corrections Corporation of America gave 78% of donations to Republicans and 22% to Democrats: https://www.opensecrets.org/...

Of course, with articles like 'Hillary cuts ties with Private Prison money' and confirmed donations to ALL democrats I don't take the title of the article I got the donation info from seriously.

On Friday morning, the campaign of Democratic presidential hopeful Hillary Clinton announced they will no longer accept donations from federally registered lobbyists or PACs for private prison companies.
“When we’re dealing with a mass incarceration crisis, we don’t need private industry incentives that may contribute — or have the appearance of contributing — to over-incarceration,” campaign spokesperson Xochitl Hinojosa told ThinkProgress, explaining that Clinton will donate the large amount she has already received from these sources to a yet-to-be-named charity.
Hinojosa explained that the move is part of Clinton’s promise to “end the era of mass incarceration,” especially private prisons and private immigrant detention centers.
“She believes that we should not contract out this core responsibility of the federal government,” Hinojosa said. “This is only one of many ways that she believes we need to re-balance our criminal justice and immigration systems.”
Yet the decision came after months of pressure from civil rights and immigrant justice groups, who launched online petitions and interrupted Clinton’s public events, demanding she cut ties with the private prison industry.


So Bill & Hillary passed a prison bill THAT DIDN'T HELP. Prison Rates Went Up While Crime Was Reportedly ON A Downward Trend. They made money from this deal. These are facts.

To anyone rational person these are damning facts. But it doesn't seem like we are dealing with rational people anymore.

Summary of some side argument going on;

Take a look at this extract from Mother Jones (the only relevant part is what happened right after the crime bill passed, i.e. was it better or worse?);

I guess if you must argue for the friends of a war criminal who believes they are doing a good job THEN you could argue that Bill & Hillary did NOT help people in any way and allowed a bad situation to get worse. Their Bill did nothing to the situation except give them credentials to get Private Prison money donations. The increase in prison populations was just what we like to do to black and poor people. Why do Bill & Hillary even pass Bills in the first place? Probably just to make money in some way since they have no effect on society. But still, why turn the Government over to someone who will use it as thier personal piggy bank? 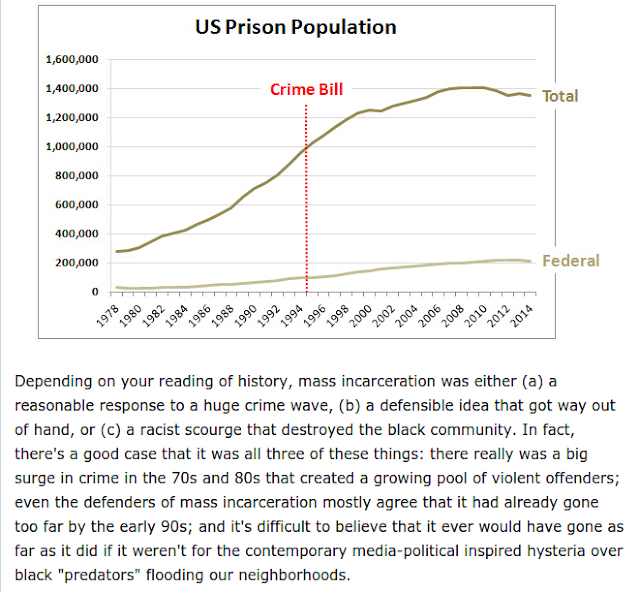 Whatever argument comes up. Hillary does get stuff done. Horrible stuff. And she does it by being passionate about advocating for it.

She does that allot.

I think maybe once she was right (maybe twice?). Surely you can't elect someone on the hope that in 4 (8 years with election fraud) she will get 1 or 2 things right? What about all the horrible stuff she will do (if her history is anything to judge by). Some people just don't care about who they are voting for. You know a woman can be evil too, right? She would just do it more affectionately. It's how the female brain is designed. But we need someone with more than just a female brain. We need someone who can make correct decisions that help EVERYONE and NEVER a small group of people (no matter how rich they are). This whole aristocrat and serf model that the establishment Democrats run by is just wrong. Help the rich. Make it harder for the poor (on whom does the tax burden for running the country fall?) ... "don't worry, we'll get your money by giving it to our friends and they will pass it on to us through speech money. You can work all your lives to pay back any mistakes they make. It's OK. We are smarter than you. We deserve this money more, our birth tells us so. Money doesn't generate money. Some people just have it and others don't. Those who do can take more from others and we will help and cause that's who we are as well. As it should be. As it's always been. Master and Serf."). The fact that they believe it bothers me more than anything else (determined by their actions). 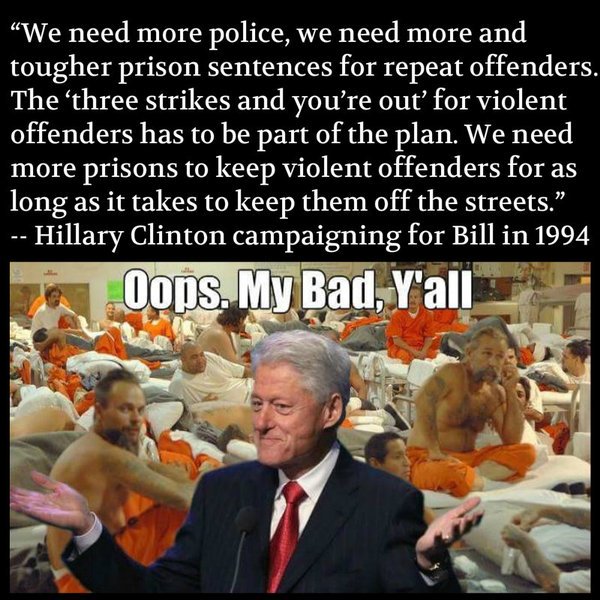