Hillary Clinton just can’t win: Democrats need to accept that only Bernie Sanders can defeat the GOP
As Reich points out in his article, America is already a nation of Democratic-Socialists, but many of us (Democrats and Republicans) simply uphold “excessive socialism for the rich.”

When Bernie Talks about Democratic Socialism he is referring to the safe and effective models being implemented by countries such as Denmark & Sweden & America i.e. stuff that helps society and thus termed "socialist". This isn't the same as communist or the economics definition of socialism. This is democratic socialism or an interpretation of what Article 1 Section 8 is saying when it says taxes must be decided upon for the general welfare of Citizens. There is a huge misunderstanding of the word and it doesn't seem to be getting any better.

Article: Sanders: When I Talk About Democratic Socialism, I'm Talking About Social Security

Salon: The 12 best reasons to be a democratic socialist - Bernie's latest speech is a triumph -- and a reminder that our greatest domestic programs are rooted in socialism 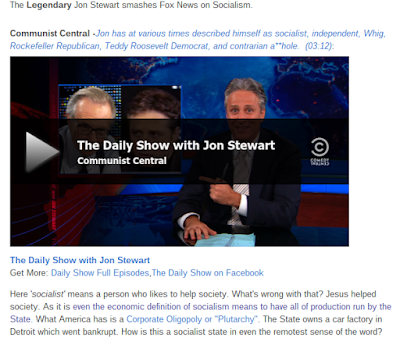 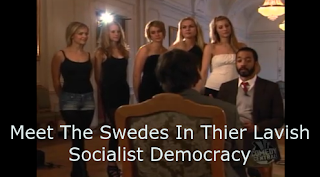 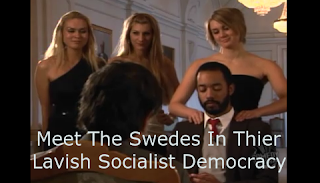 When free public school (1-12) was announced, I'm sure there was an opposition to it. But having an educated youth helps us. When social security for the elderly was announced there was opposition to it (& still is by the Koch Brothers) but is now generally considered to be a good idea (especially by those who don't want to see elderly people die-ing in the streets... churches can handle only so much before they are overwhelmed). Medicare was opposed as communism but is now considered to be a good idea. Why is this all a good idea? Because social safety nets allows society to keep knitted together and this frees up the youth from having to take care of the elderly. More freedom for youth with more education means we will have an increase in productivity which will boost our economy tremendously over a long period of time (10-15-20 years).

Fox News doesn't talk of democratic socialism the same way and Hillary, in her quest to win the Presidency, has adopted this strategy from the GOP/Fox News and since CNN is more concerned with getting along with the rich so they can fulfill their fantasies of being like an aristocracy (which they act like quite effectively),

To Recap, EVEN ... CNN declared that Bernie Sanders's Utopia was in Denmark:

Copenhagen, Denmark (CNN)Open a newspaper on any given day here in this small Europe nation known for high taxes, generous government services and its stubbornly happy citizens, and you'll almost certainly find a story about the U.S. presidential election.
The Danes are following the race with an astounding level of enthusiasm and interest in part because Bernie Sanders, one of the leading candidates for the Democratic nomination, won't stop talking about them.
Sanders has proudly adopted the label of a "democratic socialist," and he has pointed to Denmark as a model for his vision of an ideal American future.
At a presidential debate hosted by CNN in October, Sanders brought up Denmark and the surrounding Scandinavian states when asked to describe what "democratic socialism" means to him.
"I think we should look to countries like Denmark, like Sweden and Norway," Sanders said, "and learn what they have accomplished for their working people."
My Research;


In his inaugural remarks in January 1937, in the midst of the Great Depression, President Franklin Delano Roosevelt looked out at the nation and this is what he saw.


A respected political insider recently told me most Americans are largely content. “The economy is in good shape,” he said. “Most Americans are better off than they’ve been in years. The problem has been the major candidates themselves.”
I beg to differ.
Economic indicators may be up but they don’t reflect the economic insecurity most Americans still feel, nor the seeming arbitrariness and unfairness they experience.
Nor do the major indicators show the linkages Americans see between wealth and power, crony capitalism, declining real wages, soaring CEO pay, and a billionaire class that’s turning our democracy into an oligarchy.
Median family income lower now than it was sixteen years ago, adjusted for inflation.
Most economic gains, meanwhile, have gone to top.
These gains have translated into political power to rig the system with bank bailouts, corporate subsidies, special tax loopholes, trade deals, and increasing market power – all of which have further pushed down wages pulled up profits.
Those at the very top of the top have rigged the system even more thoroughly. Since 1995, the average income tax rate for the 400 top-earning Americans has plummetedfrom 30 percent to 17 percent.
Wealth, power, and crony capitalism fit together. So far in the 2016 election, the richest 400 Americans have accounted for over a third of all campaign contributions.
Americans know a takeover has occurred and they blame the establishment for it.
There’s no official definition of the “establishment” but it presumably includes all of the people and institutions that have wielded significant power over the American political economy, and are therefore deemed complicit.
At its core are the major corporations, their top executives, and Washington lobbyists and trade associations; the biggest Wall Street banks, their top officers, traders, hedge-fund and private-equity managers, and their lackeys in Washington; the billionaires who invest directly in politics; and the political leaders of both parties, their political operatives, and fundraisers.

Salon: “It’s the corruption, stupid”: Hillary’s too compromised to see what Donald Trump understands The key 2016 issue is outrage over a rigged system by special interests. There's a reason Hillary doesn't get it

In 1992, James Carville, Bill Clinton’s senior campaign strategist, scribbled a terse memo containing three instructions. Two are long forgotten. The third may live forever. “It’s the economy, stupid” became a meme because it nailed the issue that drove that election. One overarching issue drives this election, but neither Hillary Clinton’s campaign nor the Democratic Party got the memo. Any swing voter could tell them what it says: It’s the corruption, stupid.


Salon: Democrats are afraid to speak the truth about Hillary: She’s the embodiment of white privilege, while Sanders has earned his success The strongest example of white privilege is placing more emphasis on war than the plight of struggling Americans


JOY-ANN REID: Yeah, it’s interesting, because Hillary Clinton has had this remarkable arc over the course of her life, from being a sort of conservative, “Goldwater Girl”…
And so she sort of occupied this strange space that has mirrored the Democratic Party, that’s gone left, she’s gone right, she’s been hawkish, she’s been sort of the neocon in the party.

In my writing and in my advocacy of Bernie Sanders, I’ve tried to highlight this critical aspect of the 2016 Election, albeit in a more forceful manner.
Hillary Clinton has gone right, and like Reid states, “she’s been hawkish, she’s been sort of the neocon in the party.” In addition to Joy-Ann Reid, leading historians in The New York Times have discussed Hillary Clinton’s neoconservative advisers, in addition to a future “neocon” foreign policy.
Vox states “Hillary Clinton will pull the Democrats — and the country — in a hawkish direction,” yet the same people who believe Dick Cheney is Satan’s spawn could care less. The billions spent on perpetual wars could fund universal healthcare, but again, liberals have evolved on the definition of “pragmatism.”
This privilege is the embodiment of the Clinton name, but also the embodiment of the fact both Clintons are white. Hillary Clinton once called Barack Obama “elitist” for stating Americans cling to their guns, and ran a racist 3 a. m. commercial questioning his ability to make the right foreign policy decisions, yet few liberal pundits remember ancient history. In response, Obama labeled Clinton “Annie Oakley,” but the politics showed a white Democrat painting her black rival as weak; both in domestic and foreign policy.
Militarism, and its effects within American society, removes the emphasis away from those in poverty or struggling economically and towards threats like ISIS. More time is spent on nightly news programs addressing terrorism than the 27% of African Americans living in poverty or the 1 million African Americans in prison.
While a Bernie Sanders presidency would limit overarching foreign policy objectives and focus upon universal healthcare and free college tuition, his rival is never questioned about the price tag associated with destroying ISIS. Rather, the pragmatism of free college tuition is now an issue, even on the left, while Clinton’s foreign policy is hailed as smart power, not dangerous and costly.
Since the Democratic Party should stand for the antithesis of Dick Cheney and Donald Rumsfeld, it’s bizarre that progressive pundits would ignore a glaring philosophical weakness in Hillary Clinton’s record on war and foreign policy. Not many people can vote for Iraq, advocate a disastrous Libyan intervention, and write a glowing book review on Henry Kissinger’s memoirs, yet still be called a liberal icon.
This is the epitome of white privilege.
Hillary’s privilege allows this bizarre state of affairs to exist.
Of course, the Bush Administration started the ball rolling on perpetual wars, but Democrats like Hillary Clinton helped them in this regard. Ultimately, this dynamic hurts poor people. Martin Luther King’s Beyond Vietnam speech in 1967 highlights the relationship between war and poverty:


A few years ago there was a shining moment in that struggle. It seemed as if there was a real promise of hope for the poor, both black and white, through the poverty program. There were experiments, hopes, new beginnings. Then came the buildup in Vietnam, and I watched this program broken and eviscerated as if it were some idle political plaything on a society gone mad on war.

The most striking example of white privilege in America, and something that most progressive pundits ignore, is placing greater emphasis on war than the plight of struggling Americans.
Only a white politician in America can overtly challenge the core principles of liberal politics, and get away with it, while simultaneously expecting the support of minority voters.
In a sense, Hillary Clinton is the progressive whisperer, capable of a Jedi mind trick of epic proportions, while The Daily Beast and Banters of the world rush eagerly towards a right-wing cliff of Henry Kissinger’s politics and an Iraq vote “mistake.”
Remember the militarized police in Ferguson? The Washington Post writes “The Pentagon gave nearly half a billion dollars of military gear to local law enforcement last year.”
Think foreign policy doesn’t affect the black and Latino communities? Dr. Martin Luther King Jr. once said “Even when pressed by the demands of inner truth, men do not easily assume the task of opposing their government’s policy, especially in time of war.” Dr. King’s words are just as relevant today as they were in 1967.
After two major wars and failed policies that devastated the Middle East, do you think a black or Latina woman could run for president on a record of voting for Iraq, while simultaneously defending against an email scandal?
If white privilege has any definition, it’s the ability to be linked to an FBI investigation, while simultaneously touting one’s experience.
If Michelle Obama had been involved in endless scandals, one can only imagine the effects on her political future, especially if she were to run for public office. Being a Clinton, and being a white woman, has benefited Hillary tremendously.