Mass Incarceration: Geez. How Long Does It Take Hillary Clinton To Do The Right Thing?


This post deals with Hillary Clinton's involvement in expanding mass incarceration showing the Clinton don''t make decisions that help society (unless pushed? How can you trust them on issues that don't pop up in an election year for which they haven't had to take positions to win votes?). In any case, the marketing they did (directing the debate at that time) and not "regretting" it till they had to win votes cause people have Goggle... doesn't make me trust her more but less.

Extract from Politifact showing that the Clinton's didn't care about thier stricter drug war laws till Hillary started running for elections and even then it took her till April of 2015 to say the laws she helped passed were bad (one should keep in mind that they may not have passed ALL the laws but they had the bully pulpit of the Presidency and they helped push the National Debate towards MORE incarceration so they are indirectly involved with ALL the increases in the incarceration. Politifact often tries to be over accurate by leaving out cultural context and over focusing on the words used). Also, I would like to point out that Bill Clinton smoked marijuana but 'didn't inhale'... clearly he believed that if DID inhale Marijuana they should go to Prison. I say we put Bill Clinton on a lie detector machine and ask him again if he inhaled:

Politifact: A ‘tough-on-crime environment’
As Jones suggests, the United States has the highest incarceration rate among developed nations, at around 700 prisoners per 100,000 people.
African-Americans in particular are locked up at disproportionate rates. According to the Bureau of Justice Statistics, 37 percent of the 1.5 million men in state and federal prisons in 2013 were black, more than twice the percentage of their share of the population.
It wasn’t always this high; before 1975, the incarceration rate hovered around 200 prisoners.
Some of the growth had to do with Clinton policies, but experts said not all.
Crime policy during the 1970s and 1980s was driven by the "War on Drugs," an initiative launched by President Richard Nixon in 1971. Nixon famously called drug abuse "public enemy No. 1," which led to tougher sentencing and more arrests.
New York passed the nation’s first mandatory minimums for drug offenses in 1973, and Washington passed the first state-level truth-in-sentencing law in 1984. By 1987, five states had adopted sentencing guidelines for judges to follow.
President Bill Clinton took office in January 1993 touting a "tough-on-crime" agenda in response to an increase in violent crime and swelling homicide numbers. High-profile killings, such as the murder of Polly Klaas, followed later that year.
Bill Clinton was instrumental in the passage of the Violent Crime Control and Law Enforcement Act of 1994. Authored by then-Sen. Joe Biden, the sweeping crime bill provided $10 billion to fund new prisons, $6.1 billion for crime prevention and money for 100,000 new police officers.
It also enforced harsher sentencing in federal prisons and incentivized the creation of "truth-in-sentencing" laws at the state level. These laws require violent offenders to serve a minimum portion of their original sentence by ruling out the possibility of early parole. Under the bill, states that set this minimum at 85 percent of the sentence were granted funding for new prisons, and by 1998, 27 states and the District of Columbia had qualified.
The president took the final minutes of his first State of the Union to lobby for the bill. Hillary Clinton, too, campaigned for the legislation in speeches and interviewsacross the country.
The bill ultimately found wide support among Democrats and a handful of Republicans.
Just five years after the crime bill was passed, 29 states had truth-in-sentencing laws, and 24 had three strikes laws.
The bill’s effect
So did the crime bill lead to mass incarceration?
The Prison Policy Initiative, a nonprofit group that supports reducing the prison population, has tracked the massive expansion of people in federal, local and state prisons over the past century. 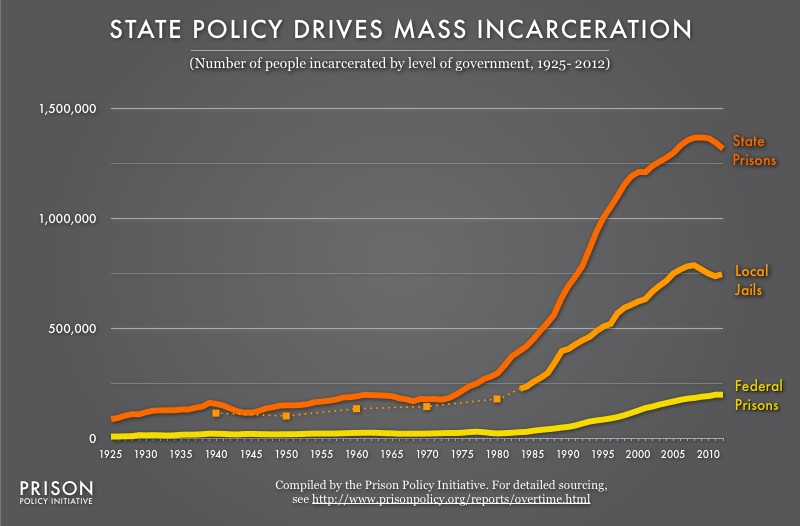 Yes, the overall inmate population of the United States has grown significantly since 1994. But the sharp upward trend actually started in the early 1980s. Prisons were adding inmates in 1990 at about the same rate they were in 1997, three years after the crime bill became law.
In addition, the bill’s new sentencing standards only directly applied to federal cases. But most of the growth since 1980 has taken place within state systems, which have added almost 1.25 million prisoners over that time.
So even though the number of people in federal prison has grown, perhaps as a result of those new standards, federal prisoners represent only a small fraction of the national prison population’s overall growth.
And while the bill incentivized truth-in-sentencing laws at the state level, many states had already enacted harsher laws on their own by 1994, said Marc Mauer, the executive director of the Sentencing Project, a prison policy think tank. Mauer said it’s hard to place the onus of responsibility solely on the Clinton-backed crime bill because the trend towards mass incarceration started as early as 1980.
"(The bill) is sometimes unfairly viewed as being the major factor that has contributed to high incarceration rates," he said.
So what really drove up the inmate population?
"Criminal justice policy leading up to the crime bill was driven by the ‘War on Drugs’ and the desire to appear ‘tough on crime’ by focusing on punishment and retribution, not rehabilitation," said Nicholas Turner, president of the Vera Institute of Justice, an advocacy and research group that published a retrospective on the bill in 2014.
Still, the 1994 bill was the single biggest legislative victory for the tough-on-crime movement. It "certainly didn’t help" the mass incarceration epidemic, Turner said.
Crime rates have been on the decline since the early 1990s, making today’s high incarceration levels even more apparent.
In the past few years, the Clintons have backtracked on the policies they once championed. The former president seems to regret the bill’s passage.
"I signed a bill that made the problem worse," he recently told the NAACP. "And I want to admit that."
Hillary Clinton has also called for changes to the justice system during her presidential campaign, saying in an April 2015 speech that "we don't want to create another 'incarceration generation.' "
Clinton's campaign highlighted its transcript of her exchange with Black Lives Matter activists where she concedes that "what was tried and how it was implemented has not produced the kinds of outcomes that any of us would want."

A look at the effects of the Clintons effect on the drug war debate (destroyed hundreds of thousands of lives);

BLACK LIVES MATTER ACTIVISTS DAUNASIA YANCEY AND JULIUS JONES - Black Lives Matter members Daunasia Yancey and Julius Jones discuss their use of disruptive tactics as a means of sparking a fruitful discussion about race issues in the U.S. (5:23)

Daily Show goes on the offensive as well (kinda);


The Senate introduces a criminal justice reform bill that would eliminate some of the obstacles that prisoners and former offenders face. (3:47)


THE BAN THE BOX CAMPAIGN - Hasan Minhaj investigates the Ban the Box campaign, which would prevent job applicants from being required to disclose their criminal records. (6:17)