The GOP's Interesting Religious Positions On Women's Issues & The Weather

Ponderings On The Psychological Ramifications Of Genocide (Native American Example) {Notice the similarity to the Iraq Genocide?}

Conservatives all talk about how being gay is a choice. It's a choice they choose NOT to follow because of thier religion. It follows from this logic that those who CHOOSE the gay life have thier own religion. The Constitution is very clear about discriminating against someone for thier religion. That means both anti-gay people AND gay people cannot be discriminated against by any State owned office or any Constitutionally inclined individual or business. This isn't complicated. Attacking gay people for thier religious right to be gay is religious discrimination akin to a hate crime.

Why does our Constitution protect all religions? Because even within Christianity there was war. First between Catholics and Protestants and then between the many sects that arose. To put it simply, if every sect of Christianity were to believe that thier path is right and others are wrong then they are empowered to attack and kill those who don't believe with them by the old testament (or to make them slaves by the new testament).


Anyone arrogant enough to reject the verdict of the judge or of the priest who represents the LORD your God must be put to death.  Such evil must be purged from Israel.  (Deuteronomy 17:12 NLT) 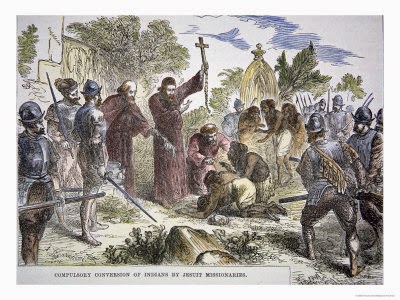 To protect US citizens from this sort of religious discrimination and cruelty the Constitution guarantees rights to EVERY belief system as long as they don't harm other people, i.e. the golden rule.

Kentucky county clerk Kim Davis will appear in federal court today to explain why she believes that God and her personal convictions empower her to break the law and deny gay people their constitutionally protected rights. Ever since this summer’s Supreme Court ruling in Obergefell v. Hodges, which legalized same-sex marriage nationwide, Davis has been refusing to issue marriage licenses – to any couple, gay or straight – citing her religious beliefs. She was ordered by the governor to do her job, but she refused. She was ordered by a federal judge to do her job, but she refused. This week, the Supreme Court rejected her appeal of the federal judge’s decision, which should have been the final word on the matter, but she’s still refusing to the job she was elected by the people of Kentucky to do. And so now she’s being hauled before a judge to determine whether she’s in contempt of court.

There is no debate on that question: Davis is flagrantly in contempt and should be punished for what she’s done. After the Supreme Court rejected her appeal, a gay couple confronted Davis and asked her to explain what authority she had to continue denying them their rights. “God’s authority,” she shot back, which is the absolute wrong answer for a government employee to provide. The Constitution is the governing power in Kim Davis’ office, and she is bound by oath to adhere to the law. She is breaking that oath, defying the Constitution, abusing her authority, and insisting that she suffer no consequences for her behavior.

Davis’ illegal and morally dubious stand against gay marriage does appeal, however, to the slice of the conservative movement that is hell bent on restoring the good old days of godly virtue when you had the state’s blessing to discriminate against gay people. It just so happens that there are a number of Republican presidential candidates who are trying to motivate that highly politically active segment of the population to get behind their campaigns, and that’s led us to a situation in which people running for the nation’s highest elected office are cheering on a rogue government employee’s defiance of the Constitution.

If you were forced to guess which 2016 Republican candidate would line up behind Davis, you would of course choose Mike Huckabee, because Mike Huckabee is acrazy person who says things like “the Supreme Court is not the supreme being, and they cannot overturn the laws of nature or of nature’s god.”

To get an idea of what sort of person Huckabee is (who supports unconstitutional behavior) check out the following links; 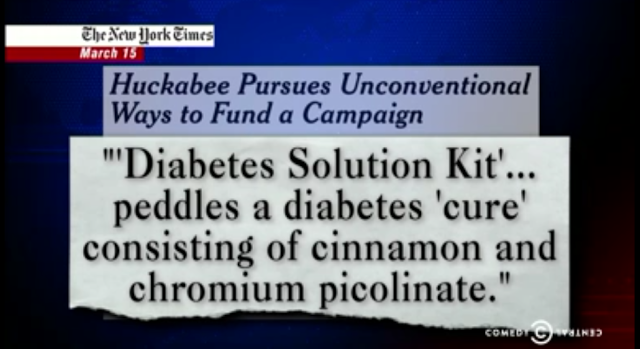 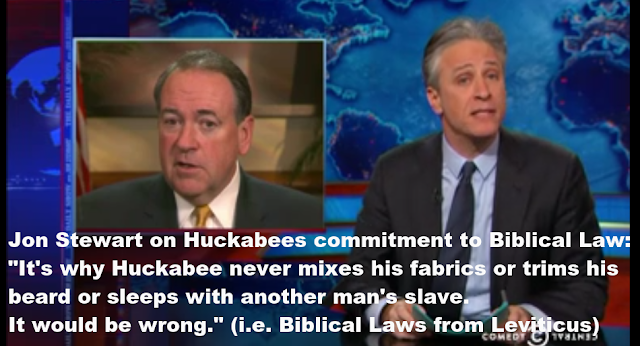