Historic nuclear deal puts US, Iran on path to peace -  Joe Cirincione, president of The Ploughshares Fund, talks with Rachel Maddow about the chances for success of the newly announced nuclear deal with Iran and how diplomacy could take the US and Iran out of a war posture for the first time in a generation.

Obama eager to engage conservative critics on Iran deal - Rachel Maddow reviews past conservative freak-outs over U.S. diplomatic outreach to international rivals and notes that President Obama, at his press conference today, was so insistent on addressing critics that he brought up the questions himself.

Call out the neocons: The Iran deal gives Democrats an opportunity — but they may be too timid to seize it Democrats might try taking the fight to the GOP in favor of Iran diplomacy, rather than fearfully ducking the issue

There are still several unknowns surrounding the new diplomatic framework limiting Iran’s nuclear ambitions, but when news of the deal came down early Tuesday, two things were certain: Republicans would be united in opposition, and Democrats would – in very Democrat-like fashion – panic and fall to pieces.

The Iran deal now moves to Congress for review and approval. Since Republicans control both chambers and are predisposed to hate the deal, what will likely happen is they’ll vote to block the removal of sanctions on Iran, and Obama will veto that resolution. The question is whether Republicans can round up enough Democratic support to override Obama’s veto in both houses (it is unlikely this would happen).

The GOP is the party of warmongers:  What its insane overreaction to Obama’s Iran deal really shows Republican presidential hopefuls have been falling over themselves in the rush to call Obama an "appeaser"


Whenever an election season rolls around, we too often hear from trolls, contrarians and cynics who wrongfully announce that both political parties are exactly the same.

We could do this all day. But the most salient contrast came on Tuesday with the announcement that the P5+1 nations finalized an agreement with Iran regarding its nuclear program. Going back to our party contrasts, one party is seeking at least 15 years of continued peace, while the other party wants to kill the deal, then perhaps, depending on their mood, proceed to “bomb-bomb-bomb” Iran, sparking a war not just between the U.S. and Iran, but involving the entire region, including Russia. Simply put: World War III. And that’s not just my forecast, it’s also the forecast of experts like former Bush-era CIA director Michael Hayden and Meir Dagan, the former head of the Israeli Mossad.

Possibly the most ludicrous reaction from the Republican field came from Lindsey Graham:

“If the initial reports regarding the details of this deal hold true, there’s no way as president of the United States I would honor this deal,” Graham told Bloomberg. “It’s incredibly dangerous for our national security, and it’s akin to declaring war on Sunni Arabs and Israel by the P5+1 because it ensures their primary antagonist Iran will become a nuclear power and allows them to rearm conventionally.”

Discontinuing Iran’s nuclear weapons program is like declaring war on Israel? The projection here is insane. Furthermore, I wonder how Israel would fare if we were to bomb Iran and deliberately collapse the region.

The second most ludicrous reaction came from Jeb Bush:

The nuclear agreement announced by the Obama Administration today is a dangerous, deeply flawed, and short sighted deal.
A comprehensive agreement should require Iran to verifiably abandon – not simply delay – its pursuit of a nuclear weapons capability. [...] This isn’t diplomacy—it is appeasement.

That word—”appeasement”—keeps coming up, so let’s take a second to establish some basics. While it’s true that the deal doesn’t eliminate Iran’s nuclear program, as David E. Sanger writes in the New York Times, the deal “is a start,” and a necessary one.
Sanger reports:

Senior officials of two countries who barely spoke with each other for more than three decades have spent the past 20 months locked in hotel rooms, arguing about centrifuges but also learning how each perceives the other. Many who have jousted with Iran over the past decade see few better alternatives.
“The reality is that it is a painful agreement to make, but also necessary and wise,” said R. Nicholas Burns, who drafted the first sanctions against Iran, passed in the United Nations Security Council in 2006 and 2007, when he was undersecretary of state for policy. “And we might think of it as just the end of the beginning of a long struggle to contain Iran. There will be other dramas ahead.”

Negotiations necessarily require compromise, a fact that the Republican field would well consider before they spout off hardline bromides. (Also, perhaps Jeb should’ve double-checked the history of our effort to negotiate a settlement. If he did so, he’d discover that the U.S. first reached out to Iran in 2002 when his brother was president. Oops.)

Other posts on, or related to, Iran:

One Of The Things The GOP Mocked Iran On Was Not Understanding Our Constitution Cause They Didn't Know Our Senators & Congress-people Are Like Dictators! 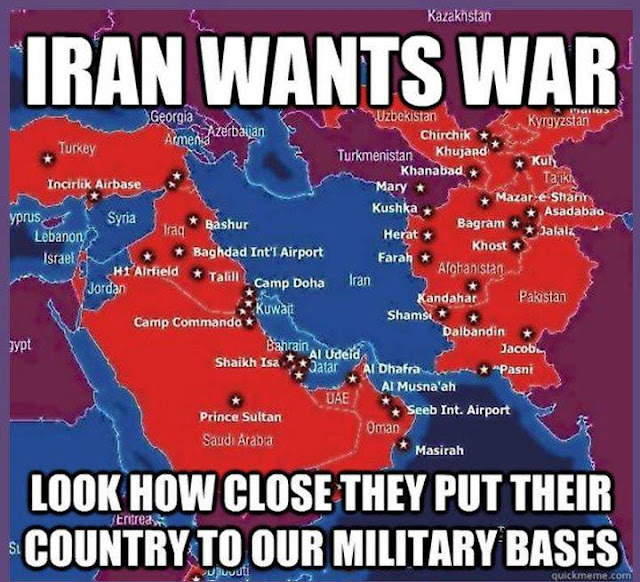 Email ThisBlogThis!Share to TwitterShare to FacebookShare to Pinterest
Labels: Iran, obama, US