Jon Stewart decided to stuff allot of stuff into this video, so I'm breaking my comments on it into 2 parts. 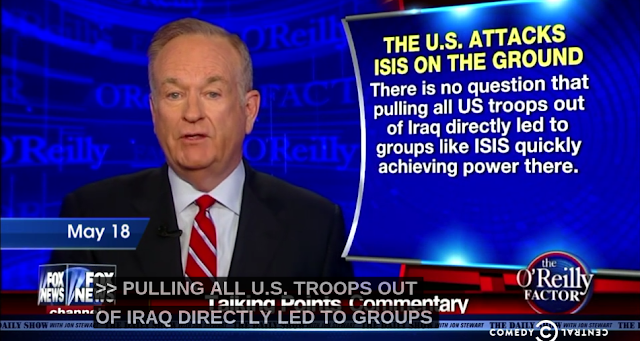 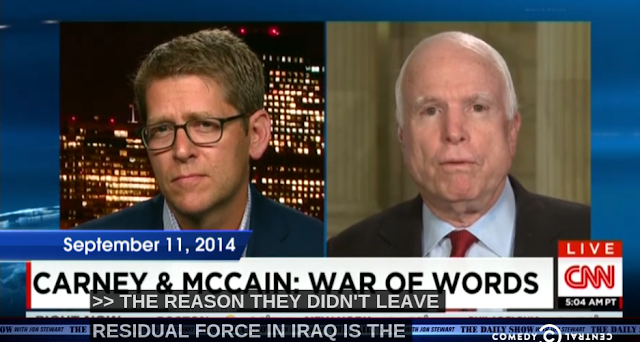 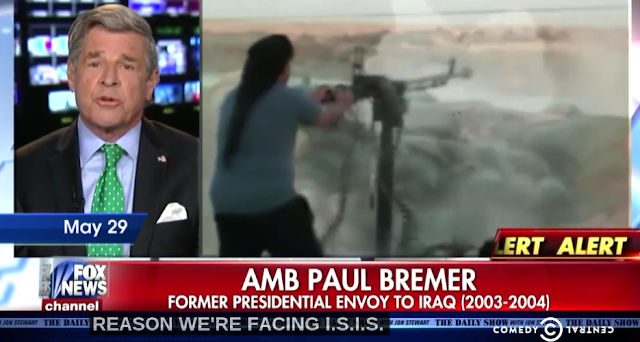 These "knowledgable" Republican commentators are claiming that following Bush's withdrawal agreement on Iraq was the biggest mistake Obama made ... in a dastardly manner; 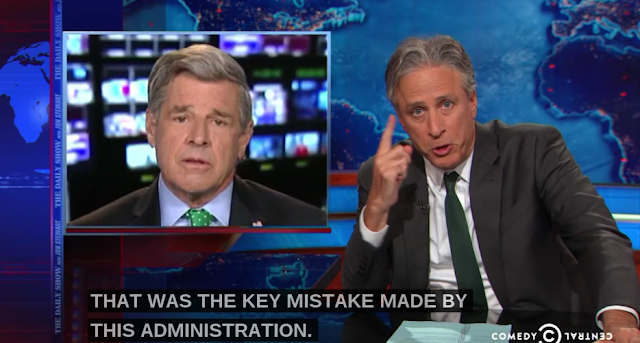 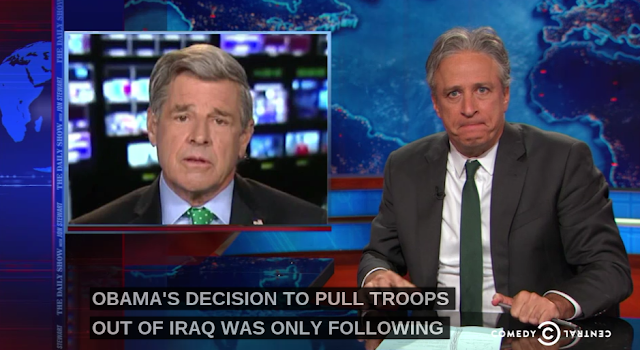 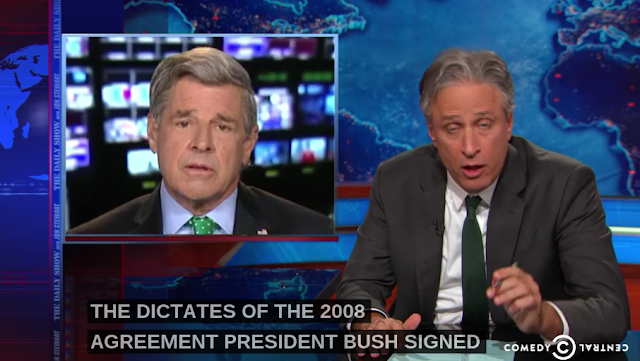 The following is a list of articles (including some from the right wing media) claiming Obama was following a Bush law;

Memo to media: Bush set a timetable for withdrawal from Iraq

Barack Obama Did Not End the War in Iraq
The withdrawal of U.S. troops from Iraq was negotiated by the Bush administration and the Obama administration actually wanted to delay the deadline
Obama Takes Credit For Bush’s Iraq Withdrawal Timeline
Red State: Iraq War ends on Bush’s schedule, not Obama’s 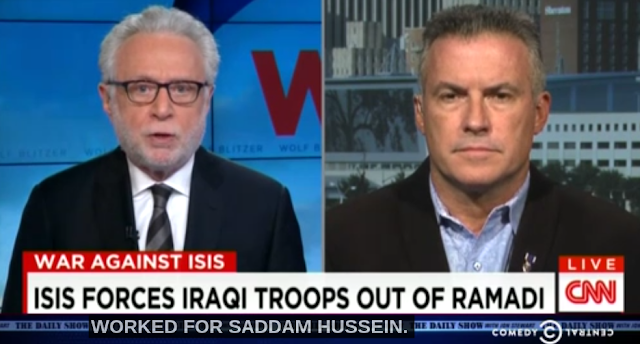 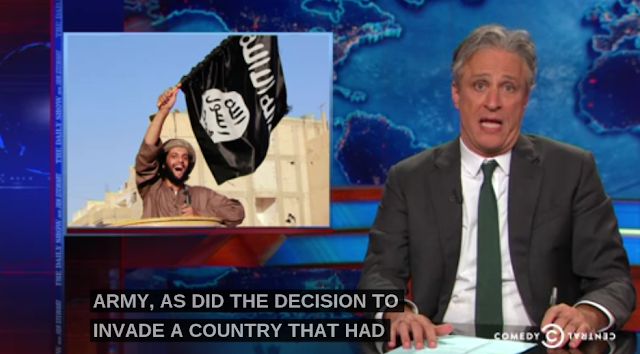 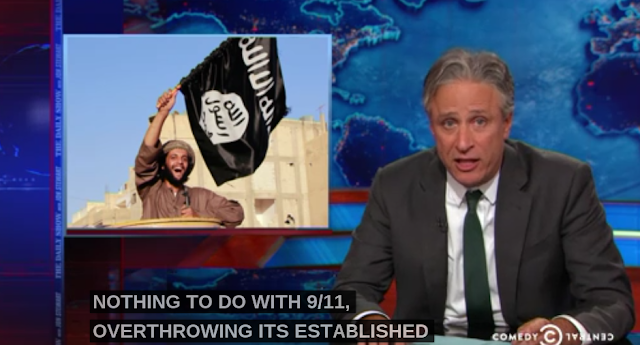 Iraq had nothing to do with 9/11. Despite Bill O Reilly repeatedly saying that it did. 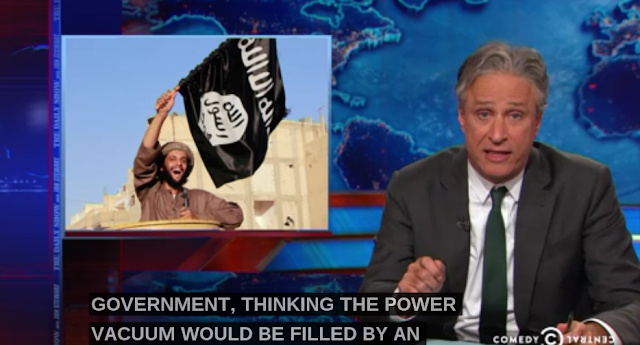 The fact that taking out Saddam Hussein's government would leave a vacuum was a well known fact;

These were the stated goal of the plans Bush & Cheney put together for Iraq DESPITE Cheney having already claimed that invading Iraq would create a power vacuum, i.e. a quagmire; 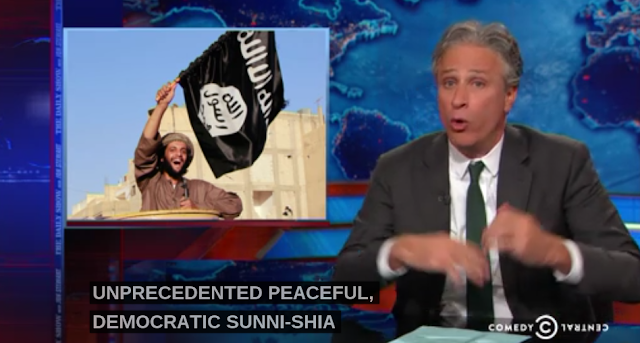 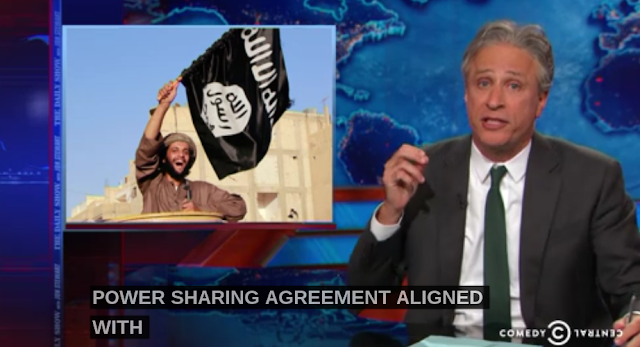 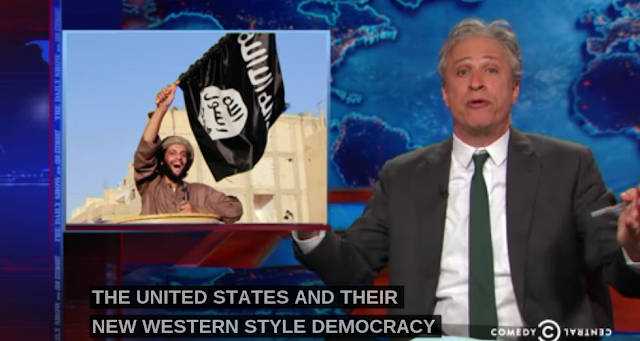 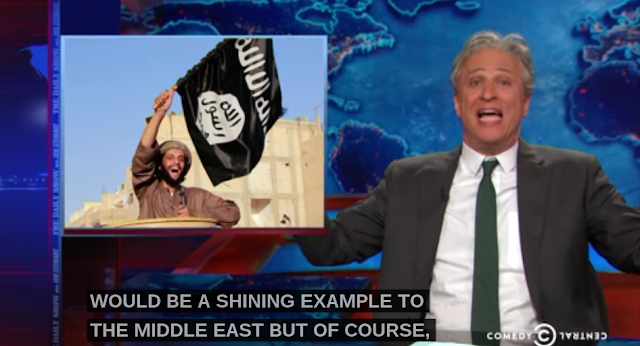 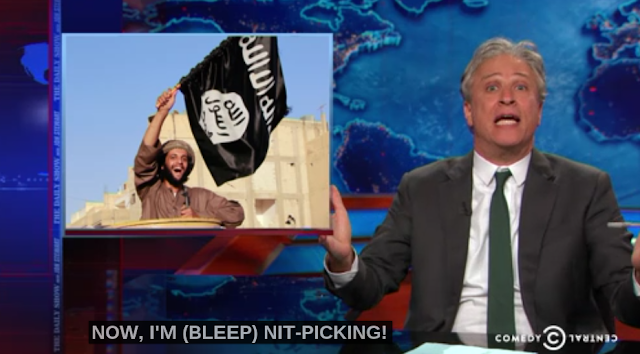 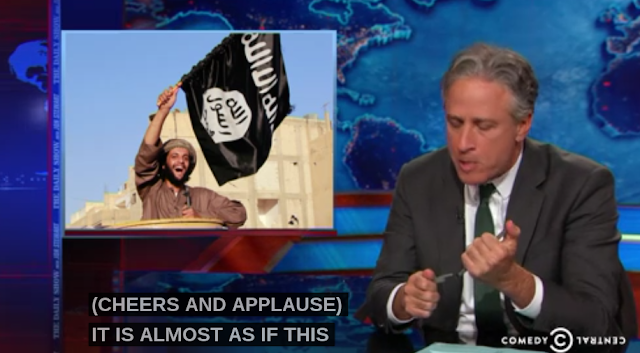 Yes, the Iraq problem can be traced to many bad GOP decisions but the fact that the Bush Administration misled the country into a war in Iraq trumps them all. It's called deceit, lying, treason etc.


The War on Terrorism is Terrorism

How the US Helped Create Al Qaeda and ISIS

by GARIKAI CHENGU
Much like Al Qaeda, the Islamic State (ISIS) is made-in-the-USA, an instrument of terror designed to divide and conquer the oil-rich Middle East and to counter Iran’s growing influence in the region.
The fact that the United States has a long and torrid history of backing terrorist groups will surprise only those who watch the news and ignore history.
The CIA first aligned itself with extremist Islam during the Cold War era. Back then, America saw the world in rather simple terms: on one side, the Soviet Union and Third World nationalism, which America regarded as a Soviet tool; on the other side, Western nations and militant political Islam, which America considered an ally in the struggle against the Soviet Union.
The director of the National Security Agency under Ronald Reagan, General William Odom recently remarked, “by any measure the U.S. has long used terrorism. In 1978-79 the Senate was trying to pass a law against international terrorism – in every version they produced, the lawyers said the U.S. would be in violation.”
During the 1970’s the CIA used the Muslim Brotherhood in Egypt as a barrier, both to thwart Soviet expansion and prevent the spread of Marxist ideology among the Arab masses. The United States also openly supported Sarekat Islam against Sukarno in Indonesia, and supported the Jamaat-e-Islami terror group against Zulfiqar Ali Bhutto in Pakistan. Last but certainly not least, there is Al Qaeda.
Lest we forget, the CIA gave birth to Osama Bin Laden and breastfed his organization during the 1980’s. Former British Foreign Secretary, Robin Cook, told the House of Commons that Al Qaeda was unquestionably a product of Western intelligence agencies. Mr. Cook explained that Al Qaeda, which literally means an abbreviation of “the database” in Arabic, was originally the computer database of the thousands of Islamist extremists, who were trained by the CIA and funded by the Saudis, in order to defeat the Russians in Afghanistan.
America’s relationship with Al Qaeda has always been a love-hate affair. Depending on whether a particular Al Qaeda terrorist group in a given region furthers American interests or not, the U.S. State Department either funds or aggressively targets that terrorist group. Even as American foreign policy makers claim to oppose Muslim extremism, they knowingly foment it as a weapon of foreign policy.
The Islamic State is its latest weapon that, much like Al Qaeda, is certainly backfiring. ISIS recently rose to international prominence after its thugs began beheading American journalists. Now the terrorist group controls an area the size of the United Kingdom.
In order to understand why the Islamic State has grown and flourished so quickly, one has to take a look at the organization’s American-backed roots. The 2003 American invasion and occupation of Iraq created the pre-conditions for radical Sunni groups, like ISIS, to take root. America, rather unwisely, destroyed Saddam Hussein’s secular state machinery and replaced it with a predominantly Shiite administration. The U.S. occupation caused vast unemployment in Sunni areas, by rejecting socialism and closing down factories in the naive hope that the magical hand of the free market would create jobs. Under the new U.S.-backed Shiite regime, working class Sunni’s lost hundreds of thousands of jobs. Unlike the white Afrikaners in South Africa, who were allowed to keep their wealth after regime change, upper class Sunni’s were systematically dispossessed of their assets and lost their political influence. Rather than promoting religious integration and unity, American policy in Iraq exacerbated sectarian divisions and created a fertile breading ground for Sunni discontent, from which Al Qaeda in Iraq took root.
The Islamic State of Iraq and Syria (ISIS) used to have a different name: Al Qaeda in Iraq. After 2010 the group rebranded and refocused its efforts on Syria.