Albert Einstein said that insanity was to do the same thing over and over again while expecting different results. It certainly seems like a safe assumption to make. If you keep putting water into a bucket with a hole in it and don't stop as soon as you notice the huge hole at the bottom of the bucket then you would certainly look crazy. That's what it looks like you you keep using economic policies with a proven track record of failure (for people who clearly don't understand arithmetic).

Video: Radical rightward shift burdening Kansas spreads to court system - Dave Helling, political reporter for the Kansas City Star, talks with Rachel Maddow about the radical conservative shift in the state of Kansas, including a law threatening to defund the entire court system if Governor Brownback doesn't get his way.

Something I thought was funny; 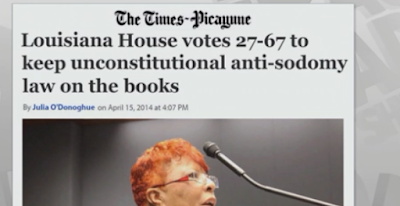 Brownback has a proven record of using Koch Brother economics promoted by Fox News and we know exactly where those sort of policies lead... to economic ruin (though theft may be a possibility as well, anyways); 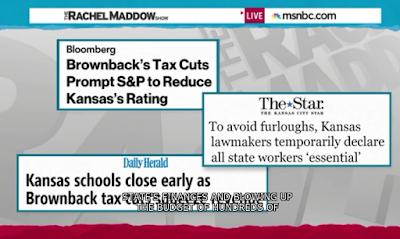 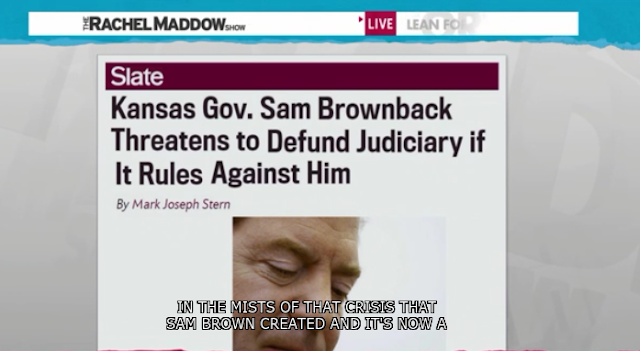 Very dictatorship like. Forcing ideas on the people through intimidation and threats. That's exactly what dictators do, do they not?


Keep in mind that none of the promises using fake economics works (if math doesn't add up, it's fake... you may need to look at how the numbers are being "added up")...

There are two main problems with Kansas Gov. Sam Brownback’s (R) far-right economic experiment. The first is that the plan didn’t work – it didn’t create the promised jobs boom; it didn’t create massive growth; and it didn’t cause businesses to stampede into the state.

Then watch this video illustrating what Gov Sam Brownback did with his experiment in verifiable fake economics;

Example of fake economics in Kansas:

If the spectacular failures of Kansas Gov. Sam Brownback’s (R) economic experiment, and the ensuing budget crisis, were the only stories dominating the state, it would be more than enough to put the Sunflower State on national front pages.
But recent developments in Kansas go much, much further. Consider this New York Times report from the weekend:

The fight between Gov. Sam Brownback of Kansas and the state’s judicial branch has escalated, with the governor last week signing into law a bill that could strip state courts of their funding.
The measure, at the end of a lengthy bill that allocated money for the judiciary this year, stipulates that if a state court strikes down a 2014 law that removed some powers from the State Supreme Court, the judiciary will lose its funding.

Think about that for a minute. Elected state officials in the Republican-led capital want state courts to endorse a policy on the makeup and budget of Kansas courts. But before the judges decide, those same officials have said the courts’ funding hangs in the balance.
As Rachel noted on the show two weeks ago, before Brownback signed the measure late last week, “ ‘You rule one way, you’re fine. You rule the other way, we will abolish the courts.’ So go ahead and consider that case, Kansas judges. Enjoy your judicial independence.”


There are two main problems with Kansas Gov. Sam Brownback’s (R) far-right economic experiment. The first is that the plan didn’t work – it didn’t create the promised jobs boom; it didn’t create massive growth; and it didn’t cause businesses to stampede into the state.

The second problem is the challenge of dealing with the consequences of failure. The Republican governor’s plan, after causing a debt downgrade, left a significant hole in Kansas’ state budget, which GOP policymakers have struggled badly to fill.
A few days ago, however, the Republican-run state government grudgingly approved a new budget, which actually included tax increases. Reluctant lawmakers said Brownback hadn’t left them much of a choice – Brownback effectively told the state legislature to raise sales taxes and cigarette taxes or he’d slash funding even more on education and disability services.
From a distance, it might seem as if this were a liberal solution to a conservative problem – Kansas Republicans got themselves in a jam by cutting taxes too much, and to put things right, they decided to start raising taxes to fix the problem. But the details matter and that’s not quite right.
The Kansas City Star’s Dave Helling explained it’s not just a matter of asking Kansans to pay more – it’s a question of which Kansans will pay more.

[N]o group, experts believe, gets hurt more than the state’s low- and moderate-income workers, those earning between $30,000 and $50,000 a year. They now face higher taxes on essential purchases without most of the subsidies that protect poorer Kansans from government’s bite.
Low-income workers, unlike those with significantly higher earnings, must watch their pennies carefully to pay for other essentials such as transportation and housing. Soon, more of those pennies – which quickly grow to dollars – will be on their way to Topeka.

Let’s call this what it is: a redistribution of wealth, from the bottom up. Kansas is keeping its tax breaks for the wealthy, while approving tax increases – by some measures, “the largest tax increase in state history” – that will disproportionately affect those at the bottom.

Jon Stewart: The Republicans' Refusal To Accept Any Tax Increases To Help America Out Of Debt Is Like A Doctor Believing Strictly In Magic To Cure A Patient