Right wing media is notorious for reporting without facts and often double down on it's fake news unless it gets a strong backlash (even then it goes forward if Karl Rover & Roger Ailes give it an OK through Fox "News"). This post highlights the right wing media, how it betrays it's viewers and how it can be dangerous to truth and thus our democracy.


Example 2: Chris Hayes explores how right wing conspiracies emerge, fully formed without evidence of forethought, onto the national scene followed by traitors... er, I mean the GOP (same thing, GOP is a party of treason as that's what's needed to fulfill it's war platform... liberal media dances around this because the GOP own thier stations)

Chris Hayes: Where do right-wing conspiracies come from?After a woman tells Rick Santorum that President Obama "tried to blow up a nuke in Charleston," Chris Hayes asks: Did I miss something?

Example 3: Extremely unprofessional behavior but it makes sense given that truth is not the right wings media's goal. The right wing media continuously proves, with it's behavior, that they can be best classified as "traitors" (if the traitorous right wing media calls the left media "traitors" they can't win a general election cause the facts are not on thier side... but I can call them traitors as much as I like and they can't touch me cause I DO have facts on my side so... TRAITOR TRAITORS TRAITORS).

What we do from the right wing media's reporting is leads on some possible traitors that we should be preparing to indict for treason (which would be easier if the GOP declare war on ISIS cause they they can be indicted for helping the enemy, i.e. treason... that's why the GOP won't vote on ISIS and instead just talk shit like schoolyard bullies).

The Daily Appaller An expletive-laden, presumably accidental reply-all from Tucker Carlson's brother gives a glimpse into the world of the conservative Daily Caller.

Example 4: Fox News & The GOP's lies have created a market for scam artists, from the miracle cure con man, Huckabee, to others seeking to make profit with the GOP's misinformation industry;

Clinton opposition finds receptive media eager for new material David Brock, founder of Media Matters for America, talks with Rachel Maddow about the willingness of The New York Times and The Washington Post to engage discredited author Peter Schweitzer on the claims he makes in his new Hillary Clinton attack book.


Example 5: As I've explained before, this behavior can also be classified as "anti-christian" and thus the GOP and it's media can even be accurately referred to as "the party of the anti-christ".

'Breathtaking' lack of humanity in right-wing media regard for immigrants Rachel Maddow remarks on the inhumanity with which right-wing media is treating immigrants in American in the wake of President Obama's announcement of reform measures. Duration: 1:25


Right Wing Media Tries To Blame All Of Societies Problems On Gays (Including the weather!)


Understanding the complexities of developments in Baltimore is difficult and time consuming. Recent developments – and some developments that aren’t so recent at all – touch on all kinds of societal factors related to the criminal justice system, race, education, law enforcement, and economics.
But to connect Baltimore and marriage equality is a real stretch.

[Tuesday] on “Washington Watch,” Family Research Council President Tony Perkins hosted Rep. Bill Flores, R-Texas, to discuss the anti-marriage-equality rally outside of the Supreme Court that both had attended that morning.
During the interview, Flores bizarrely suggested that gay marriage will somehow lead to a breakdown of the family model and an increased number of single-parent-led households, contributing to poverty and the conditions which led to the Baltimore riots:

Alas, this is not a joke. The report from Right Wing Watch published the audio clip of their discussion.
The FRC chief argued that the “redefinition of marriage” would “accelerate” societal problems, which the Texas congressman said is “exactly right.”

Note: If the CIA is really seeking to betray the American people with a misinformation campaign... then the GOP is it's political arm and the media (primarily Fox News) is it's media wing 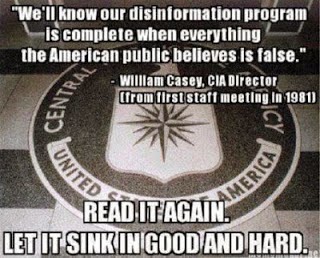 A Look At Fox News "Hypnosis"


The Mystery Of The Media