In April of 2013 America Seemed To Have Had Two Terror Attacks. One By Muslims (The Boston Marathon Bombing) & The Other By Christians (Waco Texas Fertilizer Plant Bombing)


The Only News Channel That Covered The Texas Plant Explosion:

"Devastation Beyond Description": Dozens Feared Dead in Texas Fertilizer Plant Blast, 100+ Wounded:
Cause of Texas Fertilizer Plant Explosion - Still Unknown 1 Month LaterOfficials investigating the cause of the deadly explosion at a fertilizer plant in the town of West, Texas, say they have still not ruled out the possibility the fire was caused intentionally. Possible triggers under investigation include a problem with the plant’s electrical system, a battery-powered golf cart, or arson. A pair of blasts that happened almost simultaneously killed 14 people and leveled a residential area around the plant exactly one month ago today. Many of the dead were first responders who reacted to the initial fire.
First off. Why do I think we had two terrorist attacks in the week of the Boston Marathon Bombing and not just the one.

1. The media didn't cover the Texas Fertilizer Plant Explosion despite there being more deaths and despite the explosion being so big it registered as a 2.3 earthquake.... and despite the desperation of looking for news in their comical style.

2. The GOP owns Fox News and has clear money links to CNN (with crazy Republicans on the board) and I don't know about MSNBC as I didn't have them back then. But the lack of focus on this strange incident makes me believe they didn't cover that huge explosion as well.

3. Texas had been reducing regulations that keep us safe from these explosions for a long time. Not to mention the fact that Texas is a hot bed of anti-government rhetoric (that Tim McVeigh was connected to), of neo nazis and white supremacists. Anyone of whom could have committed the Texas Fertilizer bombing.

4. Fertilizer and oil/gas is what caused the huge explosion in Oklahoma i.e. the Tim McVeigh bombing. (that means that whit supremacists, KKK & neo nazis know about this technique to cause huge explosions and the Boston Bombing has just taken place suggesting someone may have been doing a copy cat... also keep in mind the conspiracy theories floating around after the Boston Marathon bombing... altogether the situation makes these explosion very suspicious indeed.)

5. Not only did the media not investigate the job was given - rather too quickly - to the NIST i.e. the ones who made that crazy cartoon to explain how something impossible could happen after a bunch of architects & engineers pointed out the obvious problems with the WTC 7 fall.

6. Fox News & The GOP have gone out of their way to protect Christian terrorists from being called terrorists, so if this was an act of terrorism by a Christian, someone like Rick Perry (who has been promoting child abuse for years) would definitely cover up.

Daily Show - The Fox News rapid-response team distinguishes violence in the name of a religion from the practitioners of that religion -- as long as it's Christianity. (5:17):
The Daily Show
Get More: Daily Show Full Episodes,The Daily Show on Facebook,Daily Show Video Archive

(GOP/FoxNews plan is, obviously, to paint the Muslim religion as terrorism as they can then be at war with the Muslims till they are wiped out, like the Native American genocide which seemed to function on similar principles, i.e. they are savages.... 5 centuries later, they are a minority that is too small to affect anything).

More Information On The Covered Up Explosion In Texas

State Impact: On April 17, 2013, an explosion at the West Fertilizer Company in West, Texas killed 15 people, injured at least 200 more and damaged 350 homes. The explosion occurred after a fire broke out in the plant.  Investigators from the Texas Department of Insurance and State Fire Marshall’s Office concluded ammonium nitrate was the cause of the explosion. The Investigators also said the fire started in the company’s fertilizer and seed building, but have not yet found the cause of the fire.
Atlantic Photo Feature: Last week, while media attention was focused on Boston, a massive explosion took place at the West Fertilizer Company, in the small town of West, Texas. The blast damaged 150 buildings, including three of West's four schools, killed 14 people and injured more than 160 others. It was so powerful that it set off seismographs, registering as a 2.1-magnitude tremor. The cause remains unknown, and investigators are still sifting through the rubble.

Huffington Post: Almost everyone in America knows the names of the two young terrorists allegedly responsible for the April 15 Boston Marathon bombings, but few can identify the owner of the fertilizer plant that exploded in West, Texas, two days later. Both are culpable of killing innocent people, but the media, along with government regulators and law enforcement agencies, poured much more time and resources into finding the two Tsarnaev brothers than they did in investigating Donald Adair. Crime in the streets (particularly by terrorists) is big news but crime in the suites rarely makes headlines.

Why isn't the American public calling for the arrest, conviction, and imprisonment of Adair, the owner of the West Fertilizer Company in West, Texas, where an explosion on April 17 killed 14 people, left 200 others with injuries (including burns, lacerations, and broken bones), flattened houses and a 50-unit apartment building, destroyed a nursing home, damaged a local school, and left a crater 93 feet by 10 feet?

The explosion was so devastating that investigators, almost two months after the incident, are unable to definitively determine the exact cause of the explosion. But it is possible that Adair -- who also owns Adair Grain (the parent company of West Fertilizer) and Adair Farms, including about 5,000 acres of cropland and grassland in the area, worth several million dollars -- consistently flouted the law and common sense safety measures that put both his employees and the surrounding community at risk.

Texas prides itself on the lack of rules for businesses. Texas is the only state that doesn't require companies to have workers compensation insurance. Houston is one of the few cities that have no zoning laws to create buffers between schools, homes and toxic chemical manufacturers. Texas doesn't have a state fire code and prohibits small counties from having local codes allowing fire marshals to inspect and prohibit the storage of highly flammable and explosive chemicals near homes and schools.According to the New York Times, some Texas counties even cite the lack of local fire codes as a reason for companies to move there.

Texas lawmakers have also recently sought to further weaken the state environmental agency that oversaw the West plant and reduced its budget by $305 million. Even after the explosion, Texas Governor Rick Perry claimed that more government oversight and more safeguards aren't needed.
No OSHA Inspections at Texas Plant in 5 Years: Are We Doing Enough to Protect Workplace Safety?
Was it just a lack of regulations thing (as per the Republican agenda) and not a terrorist attack? We will never know.

10 of the Worst Terror Attacks by Extreme Christians and Far-Right White Men
Most of the terrorist activity in the U.S. in recent years has not come from Muslims, but from radical Christianists, white supremacists and far-right militia groups.

Christian Terrorism from The Huffington Post
Are All Terrorists Muslims? It’s Not Even Close

The Christian Terrorist Movement No One Wants To Talk About

Germany: Angst over a ten-year killing spree by a neo-Nazi group

Nazis: The Rise of Right-Wing Militias in America (They Are IN The Tea Party)

CNN: Neo-Nazis-Skinheads at US bases (NeoNazis are identified and STILL allowed into the military.)
Standard white race racism towards non-whites (these guys often join the military... was the Afghan massacre by a soldier simply bad timing? An earlier administration seemed to have that as a matter of policy both the helicopter video and the death totals of 1.2 million killed, prove that. No wonder the "Government" is so scared of whistle blowers as this stuff is just scratching the surface of what the GOP have done. This reminds me of another interesting aspect of the media, if the 1.2 million killed were white then we wouldn't be having this conversation cause it never would have happened. If it turns out that the 3000 killed on 9/11 was Bush & Cheney, now THAT would be a story. Nothing proves "liberal" hypocrisy more than this. There is no coming back from this, you are what you are. Racists.)

The strange death of Lennon Lacy: Another lynching mistaken for suicide?
North Carolina teen's hanging ruled a suicide, but was it a lynching? 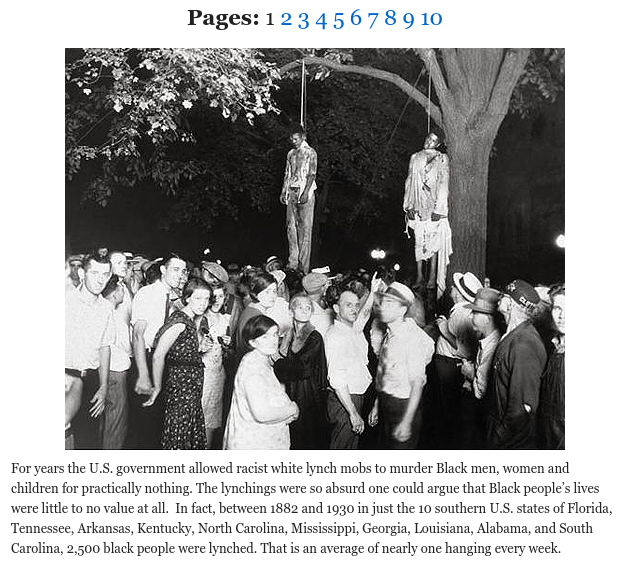 Note: There is also a cultural problem that isn't being addressed that, I believe, can be traced directly to the GOP;

Article: How Many People Have Been Killed by Guns Since Newtown? - Slate partners with @GunDeaths for an interactive, crowdsourced tally of the toll firearms have taken since Dec. 14.

Does it really need reminding that Hitler was a Christian?

GOP's War On Colored People OR The Case To Categorize The GOP As A Hate Group (it's worked all across the USA on several different categories. Yes, 9/11 was used as a tactic, but that fact that it worked speaks volumes. All white people are racist to some extent)