First off, a daily show segment illustrating the situation with a variety of views from people in the news media known to use facts in their analysis on topics that they cover (stuff I've proven &/or covered on this blog, note especially this post & compare it to this section).


Under Miner- Senate Republicans sidestep Barack Obama and send a letter to Iranian leader Ayatollah Ali Khamenei warning him not to strike a nuclear deal with the president. (7:44)

Highlights of this daily show segment showing how Dems try and stop outright war while the GOP's hypocrisy on everything from executive orders (Reagan was biggest abuser) to changing sides just to push for war... Daily Show also slams both sides of the media for thier shallow reporting. A great segment. Turns out the situation is the the GOP is threatening Iran (i.e. warning them that 'don't relax, we can still get you  like we did to the Native Americans'): 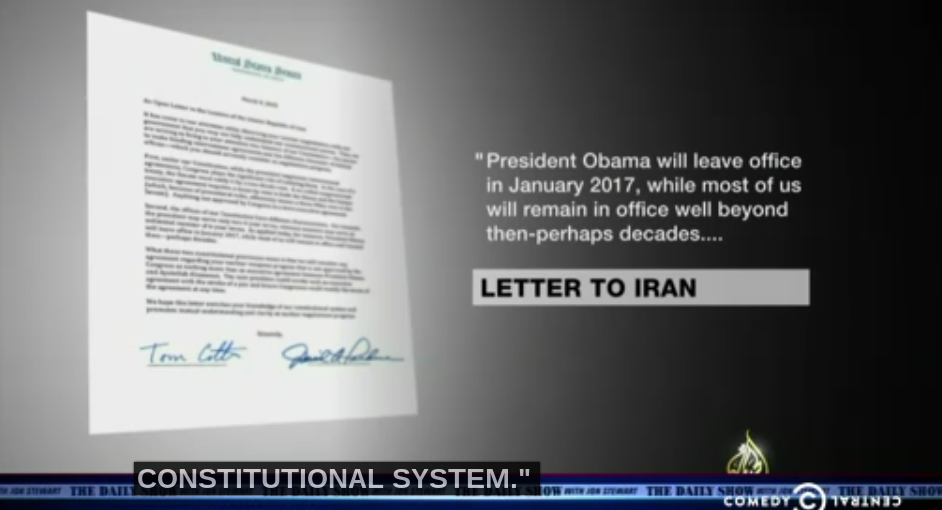 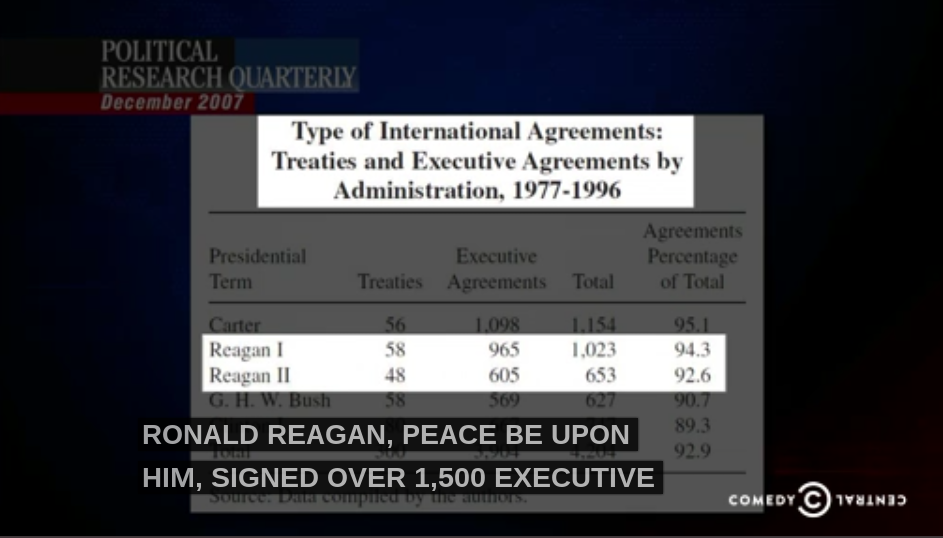 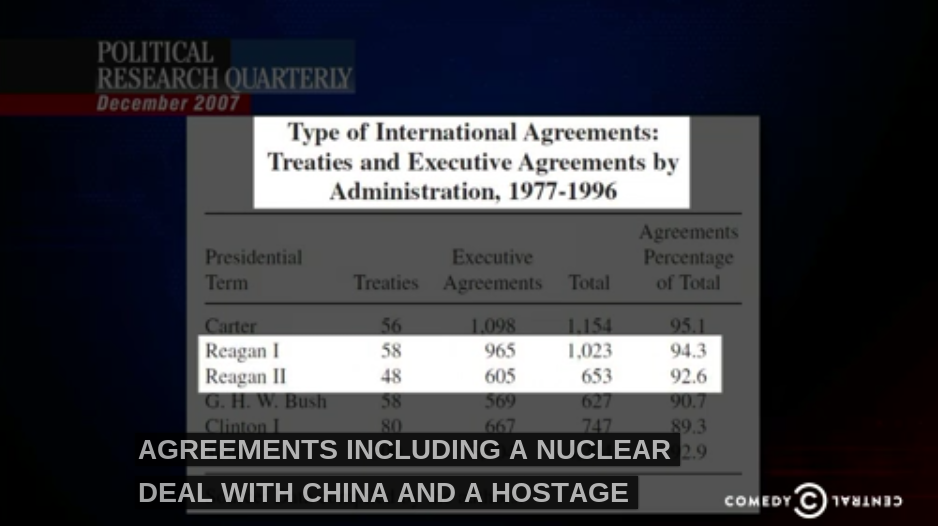 Reagan doing secret dealings with Iran (not public dealings as the Obama Administration is doing);

Pelosi defies Bush policy of provoking a war to try for peace before Syria's Assad decided to kill everyone who ever protested him ever; 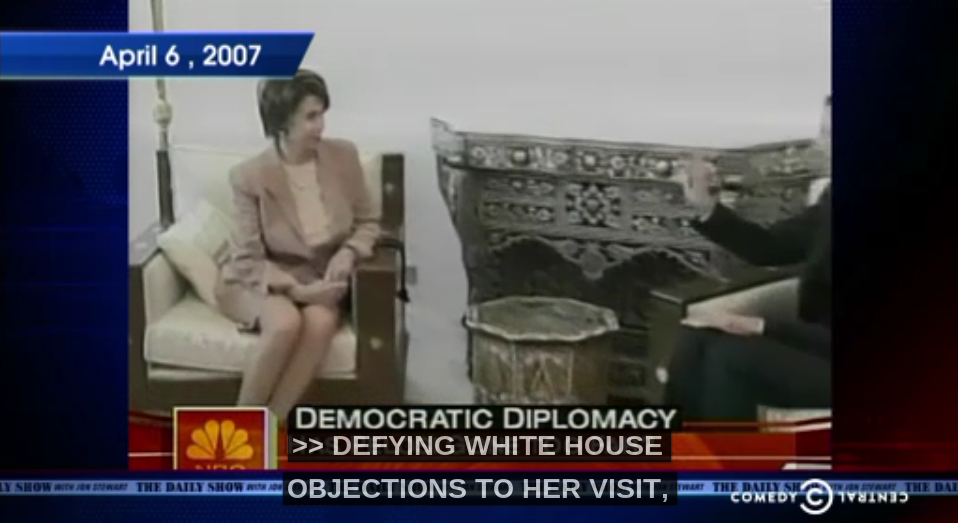 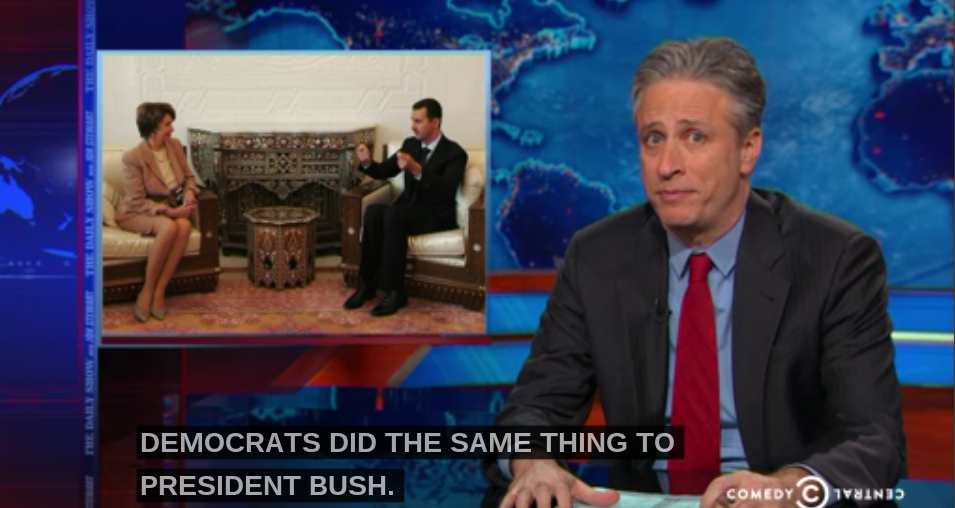 Here is Hillary exemplifying the Democratic ideal of using negotiations and/or talks for maintaining or developing peaceful postures as oposed to aggressive postures that only encourage war; 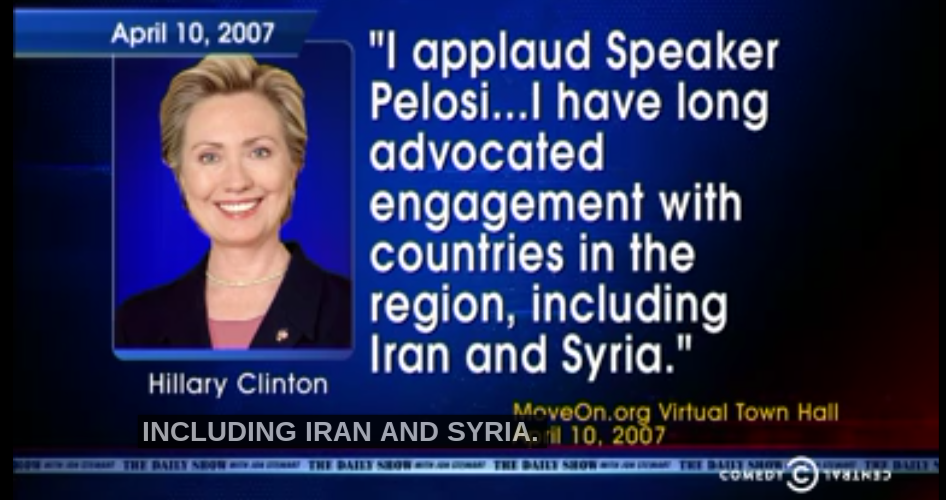 Here the Dems use a Republican tactic, it irritates Jon Stewart; 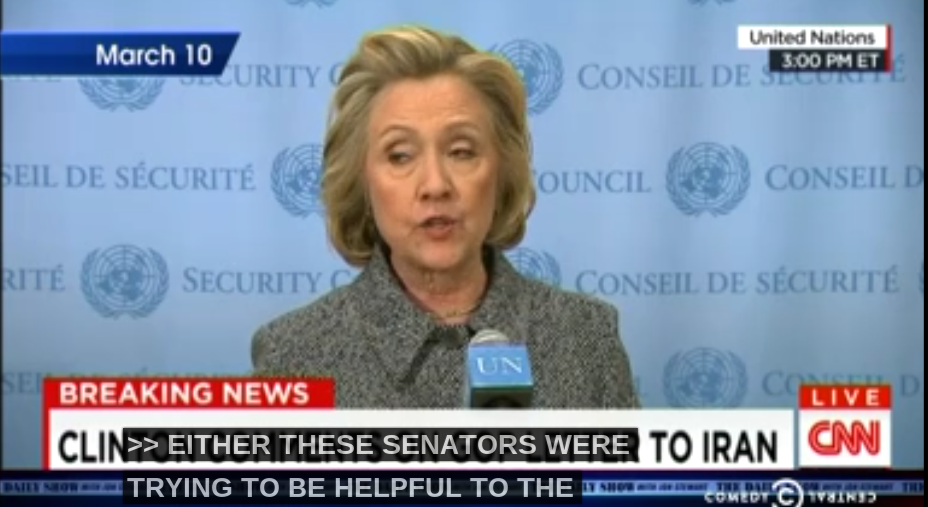 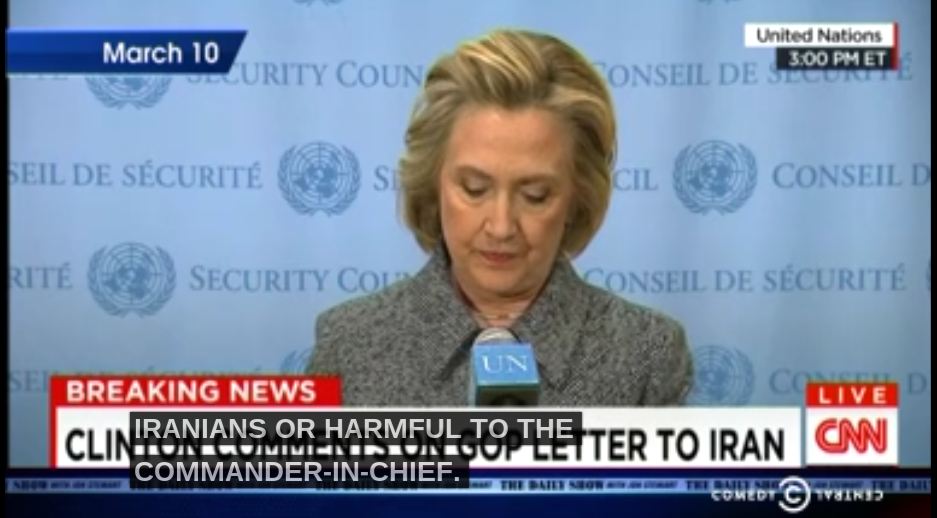 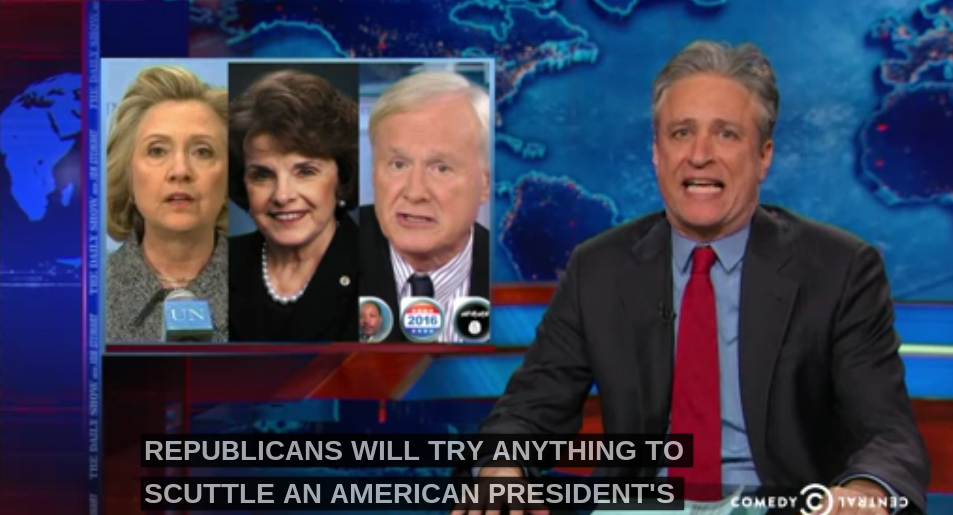 Here Jon Stewart slams the GOP media (Fox News) for it's hypocrisy (yet notice they are consistent in pushing for war!); 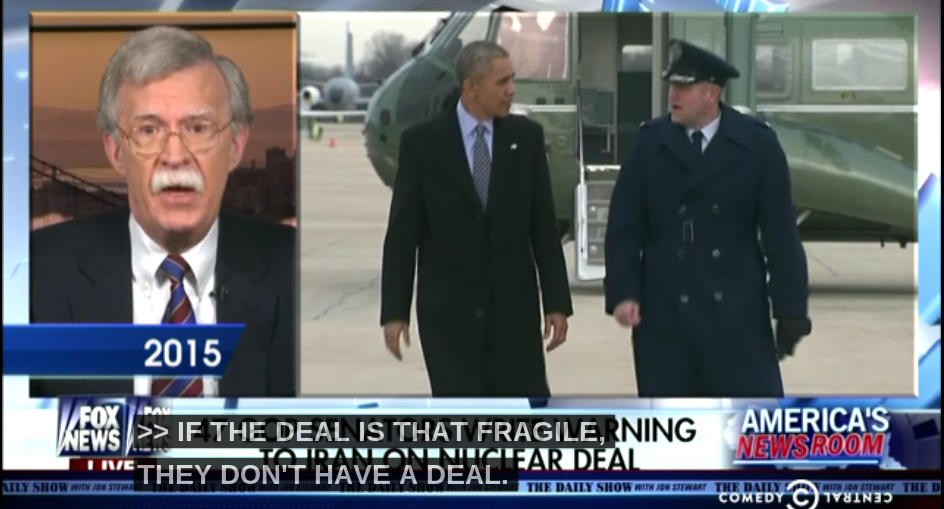 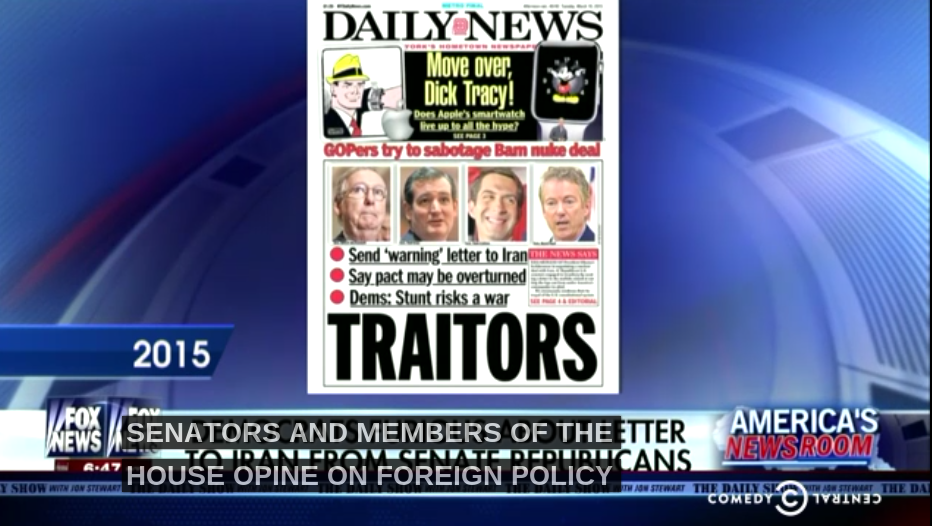 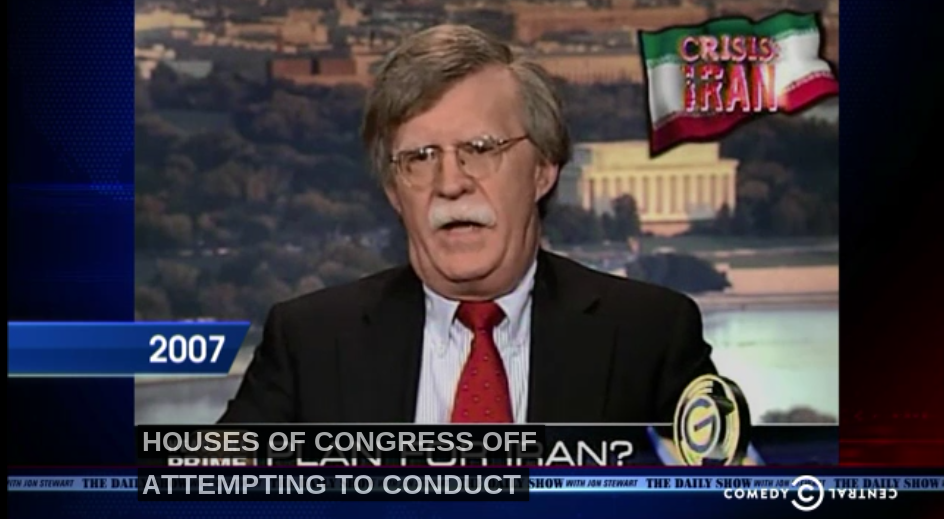 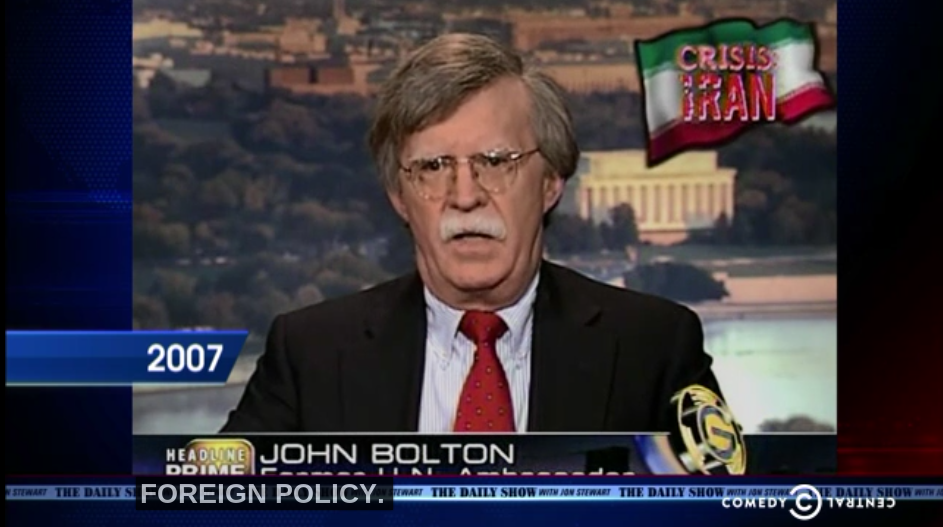 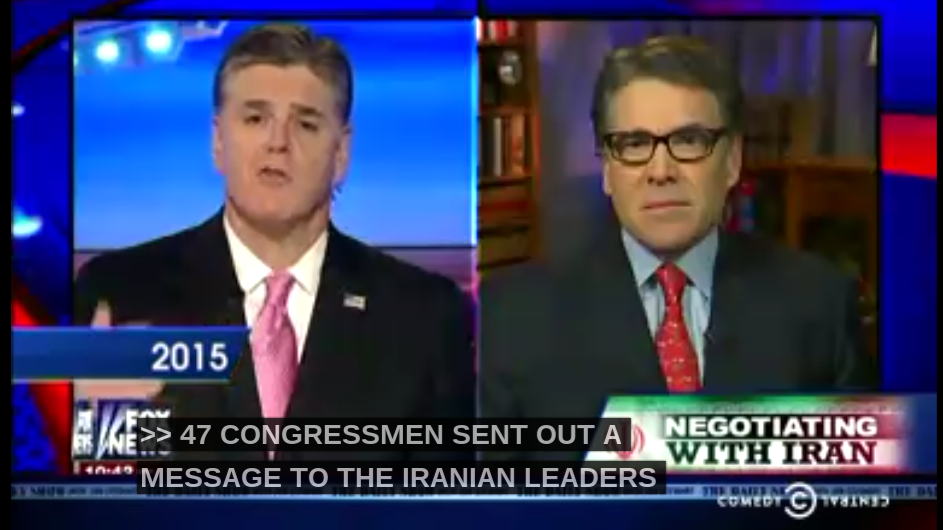 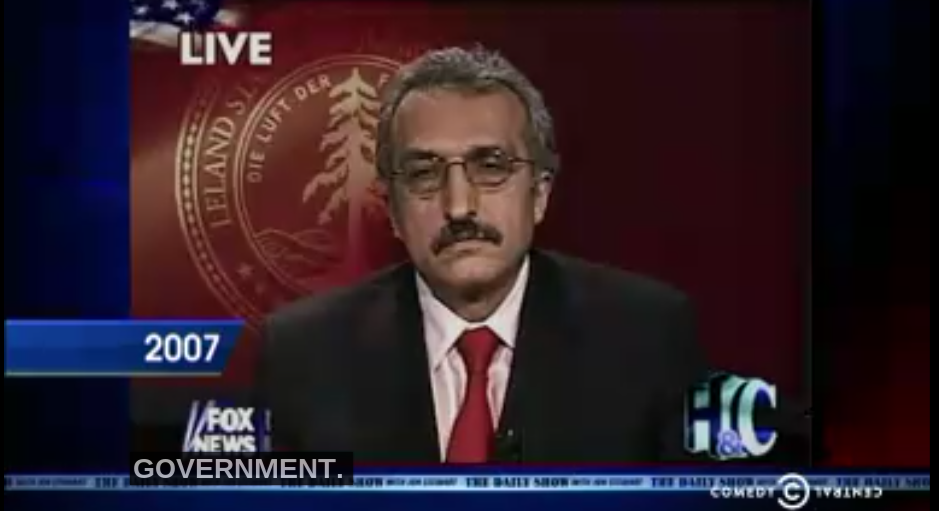 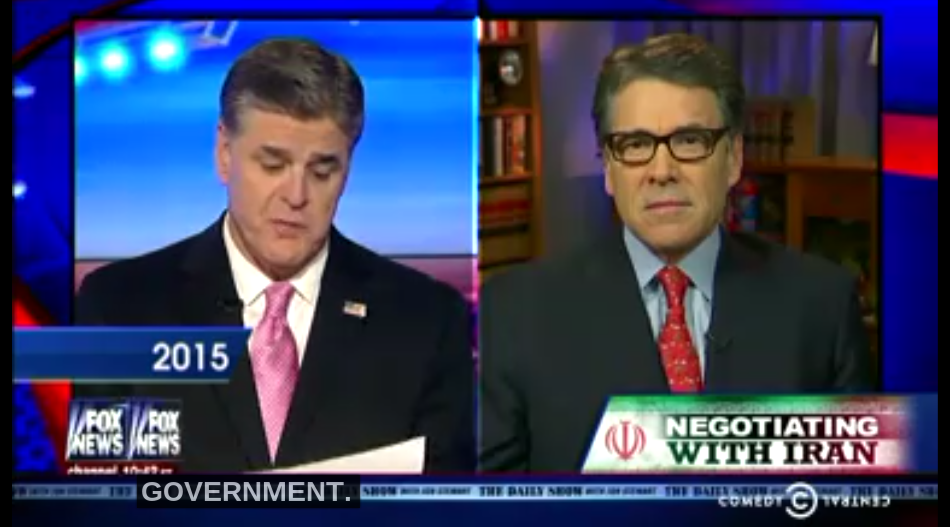 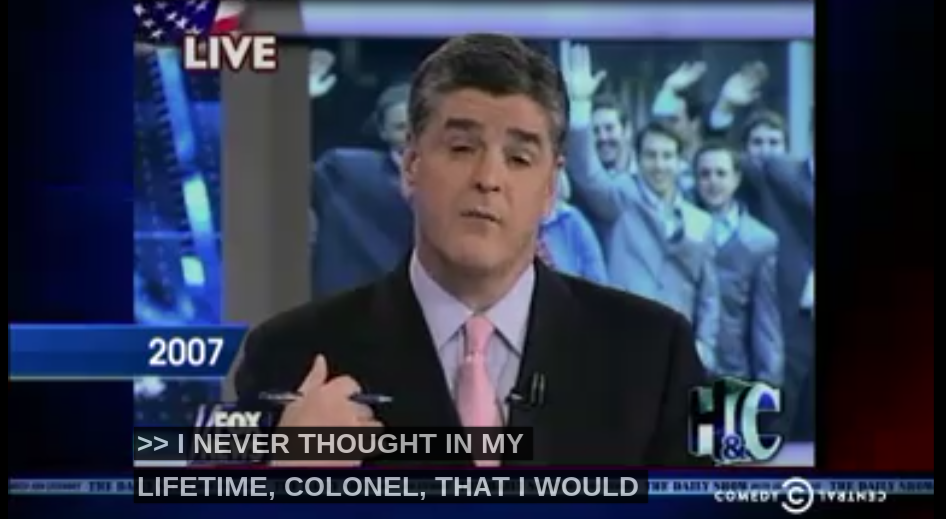 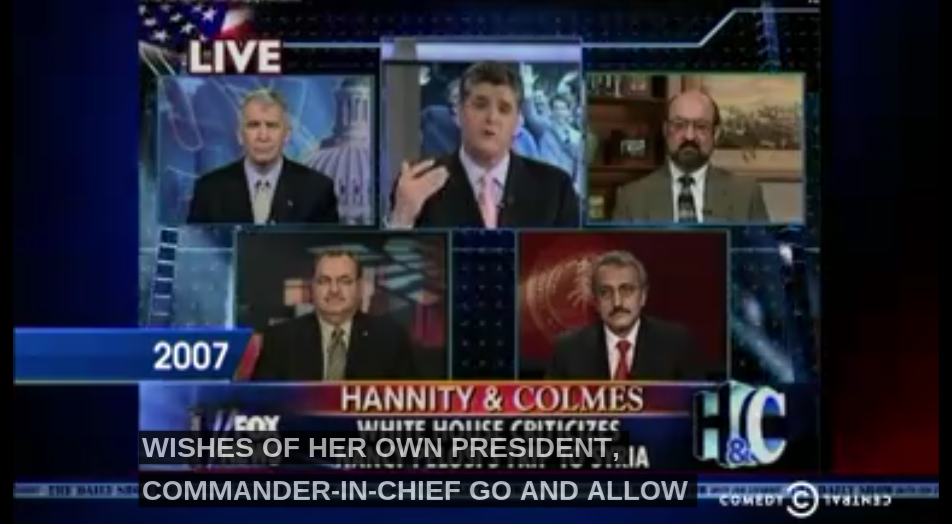 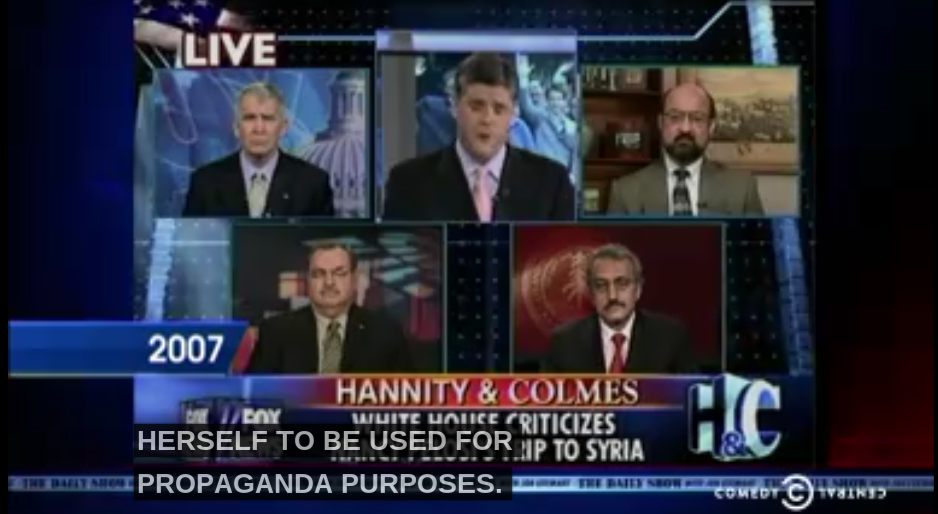 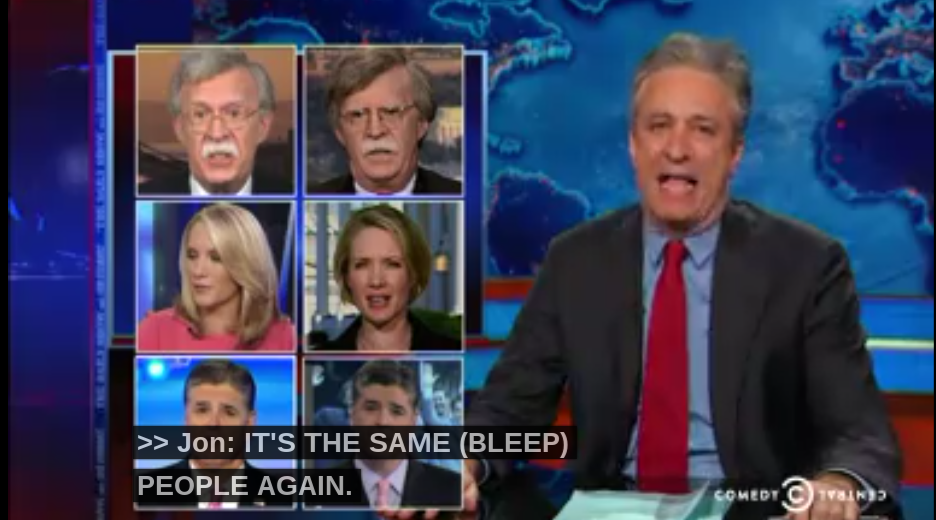 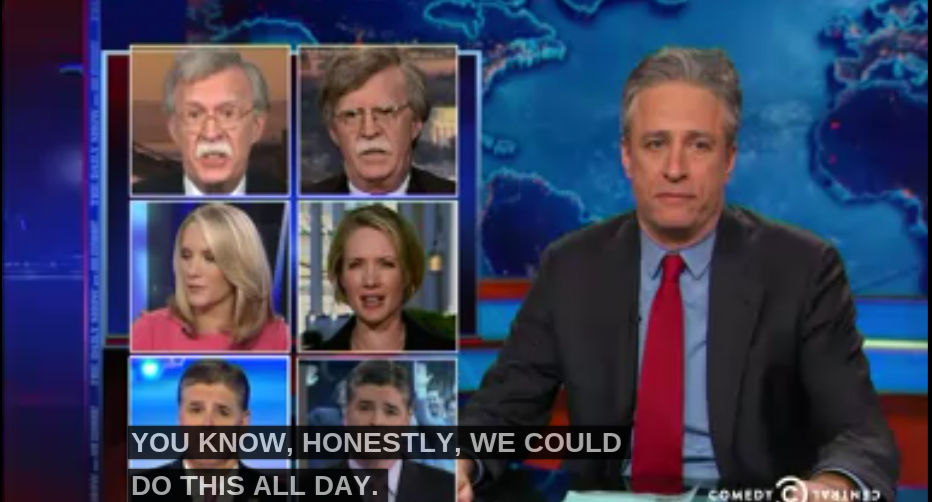 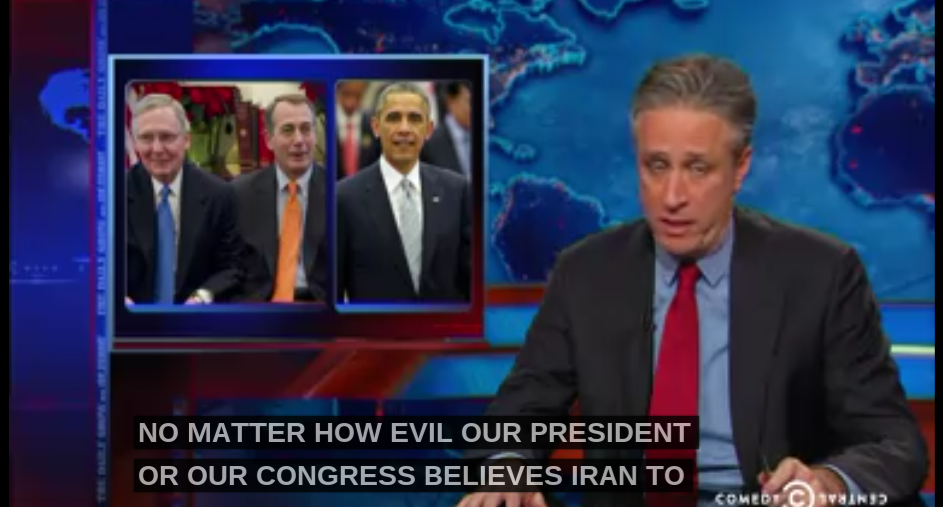 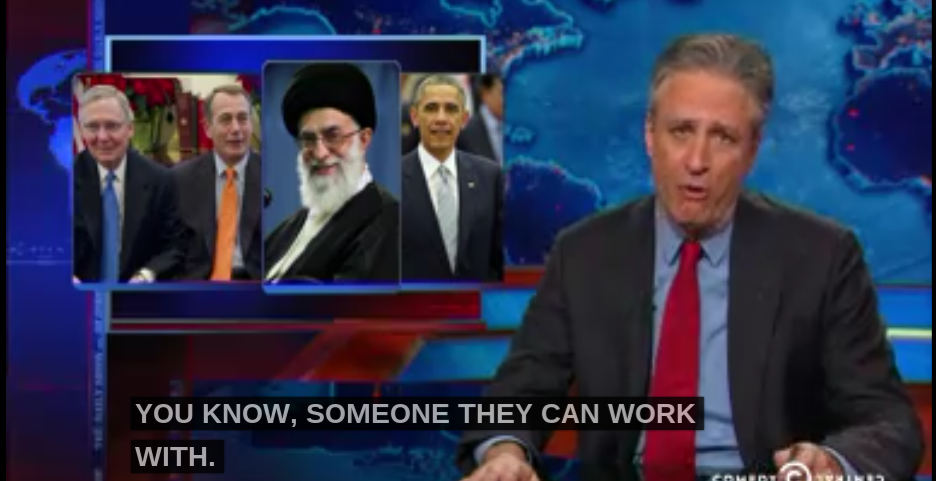 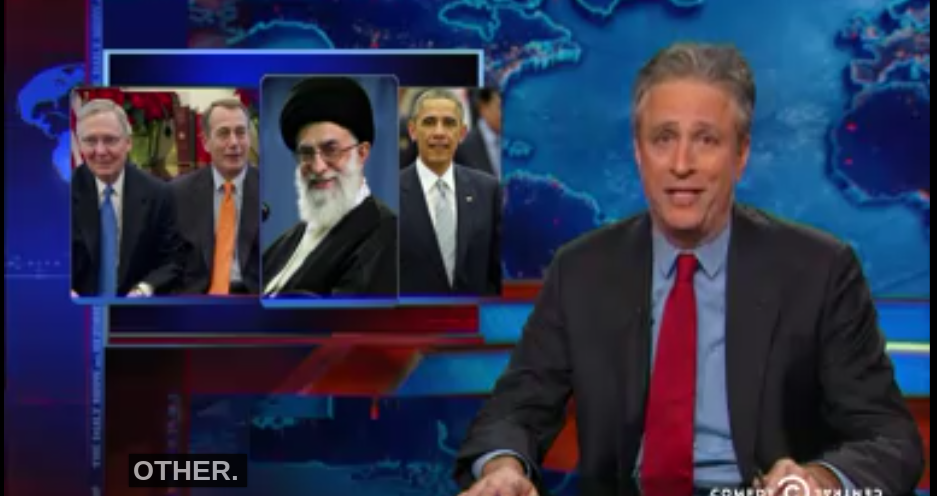 This makes sense. How can a "war party" and a "peace party" deal with each other? 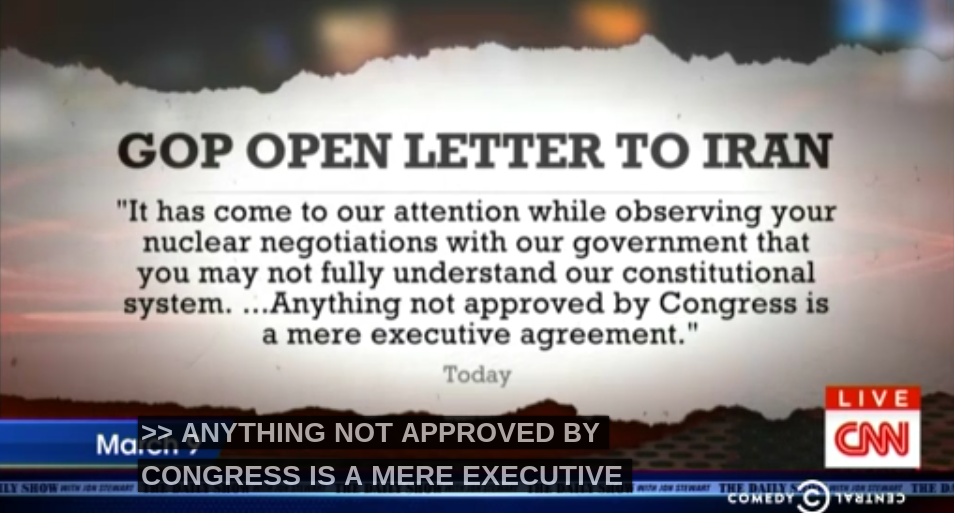 What if Obama had an Iran-Contra?A thought experiment: What if President Obama had presided over a scandal half as scandalous as Iran-Contra?

Deal or no deal? - Sen. Tom Cotton defends the GOP’s open letter to Iran today, while Sen. Joe Manchin (D-WV) says he was never even asked about signing the letter. The Washington Post’s Eugene Robinson and Gen. Paul Eaton also weigh in.


US unity on Iran shattered by Sen. Tom Cotton's 'open letter' - Senator Angus King talks with Rachel Maddow about how Senator Tom Cotton's open letter to Iran split unified American sentiment on Iran into a partisan issue and undermined the president, congressional authority, and U.S. allies in the process.

GOP attacks on Obama betray poor understanding of Iran, ISIS - Rachel Maddow talks about the unusual alignment of the U.S. and Iran in fighting ISIS, and the lack of understanding of that common purpose that underpins Republican attacks on President Obama and threatens overall national security.

TRAITORS! The Daily News Calls The GOP What They Are... TRAITORS!