The Daily Show: The Koch Brothers bring campaign financing to the next level when they pledge close to $1 billion to Republican causes in the 2016 presidential election. (8:04)


Wednesday roundup: GOP, Obama at 50 percent NBC News’ Chuck Todd and Robert Costa join Morning Joe to discuss the potential 2016 GOP field and who among the current crop is likely to lead. And President Obama’s approval number is at 50 percent, according to Gallup.

From 50 secs on wards Chuck Todd sets up the false belief that Jeb Bush could get pushed out of his own primary. Then Joe does some shill work.

1:42 to round off the setup - to make it more believable and to create a "narrative" - they talk about Huckabee whose gonna come forward with the belief that gays are awful (which he will refrain from 'cause that's what people want nowadays) and that women are essential the property of man or so on. So he gets the 25% of the GOP that are ultra conservative (evangelicals) with co-ordinated lies and then he endorses Jeb Bush when he loses. (the whole thing of people jumping in from all over the place to "run for prez cause the field is open"is just a con)

At 2:46 Joe begins his pushing of the Koch Brothers agenda and how cool the GOP are. It gets pretty obvious. Then they make it clear what the GOP's play is gonna be.

Koch Bros. to spend $889M: What it means Top Talkers: The Koch Brothers plan to spend close to $900 million on the 2016 campaign, according to a New York Times report. That kind of money, the story suggests, would “allow their political organization to operate at the same financial scale as the Democratic and Republican Parties.” Writer Nicholas Confessore discusses.

This one is fascinating. Joe is clearly selling the idea of selling our democracy to the highest bidder as "the wave of the future". If this doesn't indicate where his loyalties lie (with money), nothing does.

I think its clear now that from the Supreme Court's decision to hand an election to the GOP without completing a vote count 'cause it's good for our unity' (why? because the greatest democracy in the world can't handle a vote count?) simply continued with it's "citizens united" decision.

Citizen United is basically legalized bribery. The precedent for this (for a mental comparison) is when GOP led Congress legalized insider trading for itself. Only citizens united was done by the GOP weighted Supreme Court.


From a Supreme Court point of view: Citizen united is like a fire sale where everything must go... only the stuff being sold is our country. i.e. As a result of the disastrous Citizens United Supreme Court decision, billionaires and large corporations can now spend an unlimited amount of money


Easy to Catch Hypocrisy: The policies being pushed by the GOP are the same failed economic policies pushed by Bush. Koch Brothers are simply the new face of the GOP i.e. like getting George Bush & Jeb Bush together at once. It's not a secret but there does seem to be a the media's GOP echo chamber problem.


Escape From Rich Mountain - Republicans try to distance themselves from Mitt Romney but then propose the same policy measures as the former presidential candidate. (3:00): 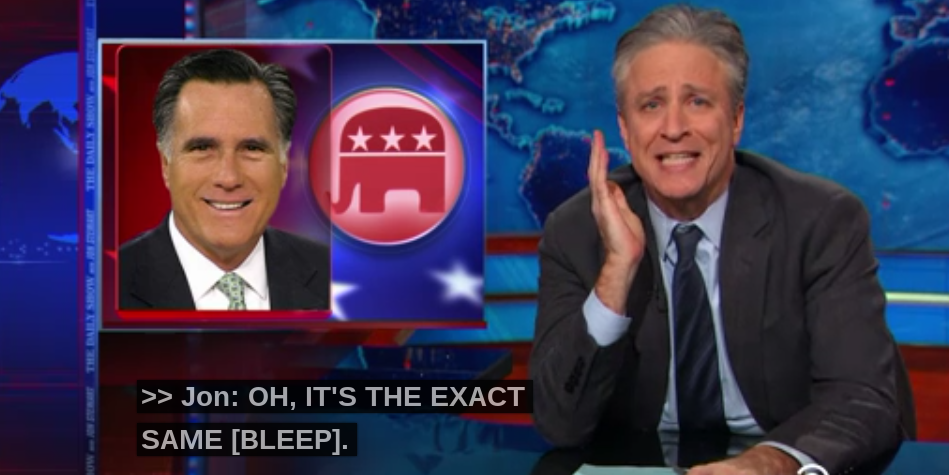 
The Daily Show: The Koch Brothers become The Daily Show's latest sponsor, prompting Jon to welcome them with some minor adjustments to their advertisement. (4:12):