9/11 Mysteries: The Funniest Popular Mechanic Report I Ever Did Read (Another Report Debunked)

Background:
1. An Overview Of The Strange Inconsistencies In The OFFICIAL Account Of The 9/11 Incident Using The Daily Show
2. 9/11 Mysteries: Popular Mechanic's "WTC 7 Report" Debunked
3. This is what a controlled demolition of two towers looks like;

It's like, you see a story on TV, they tell you what it is so you're like, OK. That's what it is.

But first, have you noticed how the beheading isn't played on TV not even the preamble that much? IT's because it extremely violent. It's like watching a whole building of people being attacked and set on fire. Keep in mind that playing the two towers getting it that way, again and again, throughout the years has caused serious psychological trauma for idiots, so their brains will essentially shutdown and they will walk around like zombies. If they are ever able to put aside those images then maybe they will begin to think clearer. Since most people are consumed with revenge (though it's oh so socially unacceptable to say so), lets do a quick tally.... for the 3000 killed on 9/11 for an incident that hasn't yet been transparently investigated, so far, 1.2 million brown people in Iraq have died not to mention so many war crimes committed in Afghanistan (a nation used to it) that I'm sure the tally for bombing innocent lives into oblivion (the civilized way of killing - beheading being the barbaric one) is in the several hundred thousand by now... so an eye for an eye has long since past, now what are we doing? The consistent demolition of a race like we did with the Native Americans? Following instead of an eye for an eye, what are you following? "in the cities of the nations the Lord your God is giving you as an inheritance, do not leave alive anything that breathes." Deuteronomy 20:16 ? (Some things can be hard to swallow).


Turns out jet fuel can't burn hot enough to melt steel... and if it was to - magically - happen, the building would sever and fall where the metal got weak from the heat (it's called "melting" for a reason), looks like this:

Claim: "We have been lied to," announces the Web site AttackOnAmerica.net. "The first lie was that the load of fuel from the aircraft was the cause of structural failure. No kerosene fire can burn hot enough to melt steel." The posting is entitled "Proof Of Controlled Demolition At The WTC."
FACT: Jet fuel burns at 800° to 1500°F, not hot enough to melt steel (2750°F).  {Editors Note: This means the GOP thought of the excuse before figuring out the science of it... something I would expect the anti-science party to do}: However, experts agree that for the towers to collapse, their steel frames didn't need to melt, they just had to lose some of their structural strength—and that required exposure to much less heat. "I have never seen melted steel in a building fire," says retired New York deputy fire chief Vincent Dunn, author of The Collapse Of Burning Buildings: A Guide To Fireground Safety. "But I've seen a lot of twisted, warped, bent and sagging steel. What happens is that the steel tries to expand at both ends, but when it can no longer expand, it sags and the surrounding concrete cracks." 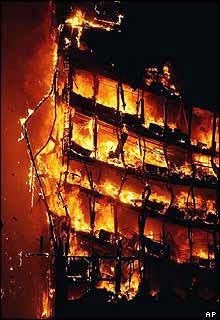 Popular Mechanics: "Steel loses about 50 percent of its strength at 1100°F," notes senior engineer Farid Alfawak-hiri of the American Institute of Steel Construction. "And at 1800° it is probably at less than 10 percent." NIST also believes that a great deal of the spray-on fireproofing insulation was likely knocked off the steel beams that were in the path of the crashing jets, leaving the metal more vulnerable to the heat.
But jet fuel wasn't the only thing burning, notes Forman Williams, a professor of engineering at the University of California, San Diego, and one of seven structural engineers and fire experts that PM consulted. He says that while the jet fuel was the catalyst for the WTC fires, the resulting inferno was intensified by the combustible material inside the buildings, including rugs, curtains, furniture and paper. NIST reports that pockets of fire hit 1832°F.

Not only did these pockets of fire NOT encompass the entire building, but it wasn't hot enough to melt steel anyways, i.e. it was about 900 degrees too cool IN THOSE POCKETS OF FIRE.

The rest of the building was NOT on fire. It couldn't melt enough to bend much less collapse like a pancake ALL THE WAY FROM THE TOP! WHAT WAS ON THE TOP FLOORS? THE MOON?

Pockets of VERY HOT fire would still only cause a collapse like this (not a pancake like effect, i.e. the top of the building would fall over sideways around the weak area of the building like this):

Popular Mechanic: "The jet fuel was the ignition source," Williams tells PM. "It burned for maybe 10 minutes, and [the towers] were still standing in 10 minutes. It was the rest of the stuff burning afterward that was responsible for the heat transfer that eventually brought them down."


i.e. he's saying that the Jet Fuel didn't cause the collapse the tower (as science has noted that jet fuel doesn't burn that hot) but the other stuff in the towers - that's NOT that combustible! - led to this immense fire (which we couldn't see, not like the fire had anytime to spread building wide like in the Madrid Building) which led to a sudden, demolition like collapse of the two towers of WTC;

To begin with the plane hit so far up that there was no way the whole building could catch on fire in the time the building took to fall so the melting steel hypothesis just falls apart under any logical scrutiny (something which emotionality tends to cause here... it's why the media, esp Fox News, play the two towers plane hit repeatedly)

In other words, there is absolutely no reason for the North Tower to fall like it did and NOT like this (unless explosives were used):

Notice that you can see molten metal DRIPPING from the crash site right in the beginning of the video on the South Tower.

Most likely scenario based on vetted evidence I have, thus far:

Dick Cheney was informed about the attacks. His entire "security" staff was aware of it (security for whom?).

More about accountability in the US under Bush (example of Rice)... 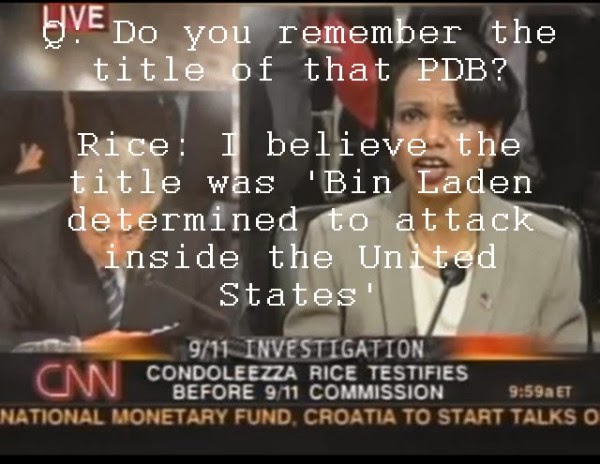 Jet fuel, rugs, furniture... and PAPER can't burn hot enough to melt steel and the whole building wasn't on fire long enough to even affect the metal in the skyscraper anyways, so the question is moot.

So they seemed to have planted a bunch of demolition bombs to increase the fatality rate of the incident for the emotional effect (the lower building could have been evacuated and the upper building could have been helped with copters which would still leave the attack as "spectacular" but not "the greatest attack on US soil out of envy for our freedoms" we have ever seen). The smoking gun was WTC 7, that's why Fox resorted to bullying tactics as "news" to hide the truth. With no big fires, and no biulding having fallen from fire before anyways, WTC 7 was a dead giveaway that explosives were being used on 9/11.

& if they were being used on WTC 7 then why not the two towers of the world trade center? This building also "fell into it's footprint", not as good as WTC 7, but they were amougnst the tallest buildings in the world, made to last a long time... until weight caused a never before heard of effect (cause it's architecturally impossible) to cause WTC to fall like it was made of powder.

A very suspicious story... if it wasn't for the emotional effect of 2 buildings have fallen, in the middle of a city, with a heavy death toll, an enemy identified quickly from the two that claimed to be the ones. There would have been a real investigation. A transparent one. As one would expect in greatest DEMOCRACY in the world. Not this tactic...

Cheney's Assassination Squad (which he says he never used. lol!):


And then two quick wars - one for heroin and the other for oil - in the name of 9/11 that left the Constitution and the Bill of Rights in shambles. (NSA, so unpopular under Obama ... was started by Reagan through executive action and made popular by Bush).

In any case, the biggest threat to our National Security seems to be us.

BEWARE:
From About.com - Question: What Is Cognitive Dissonance?

Answer:People tend to seek consistency in their beliefs and perceptions. So what happens when one of our beliefs conflicts with another previously held belief? The term cognitive dissonance is used to describe the feeling of discomfort that results from holding two conflicting beliefs. When there is a discrepancy between beliefs and behaviors, something must change in order to eliminate or reduce the dissonance.

Examples of Cognitive Dissonance Cognitive dissonance can occur in many areas of life, but it is particularly evident in situations where an individual's behavior conflicts with beliefs that are integral to his or her self-identity. For example, consider a situation in which a woman who values financial security is in a relationship with a man who is financially irresponsible.

The conflict:
In order to reduce this dissonance between belief and behavior, she can either leave the relationship or reduce her emphasis on financial security. In the case of the second option, dissonance could be further minimized by emphasizing the positive qualities of her significant other rather than focusing on his perceived flaws.

A more common example of cognitive dissonance occurs in the purchasing decisions we make on a regular basis. Most people want to hold the belief that they make good choices. When a product or item we purchase turns out badly, it conflicts with our previously existing belief about our decision-making abilities.

How to Reduce Cognitive Dissonance: There are three key strategies to reduce or minimize cognitive dissonance:
Why is Cognitive Dissonance Important?Cognitive dissonance plays a role in many value judgments, decisions and evaluations. Becoming aware of how conflicting beliefs impact the decision-making process is a great way to improve your ability to make faster and more accurate choices. 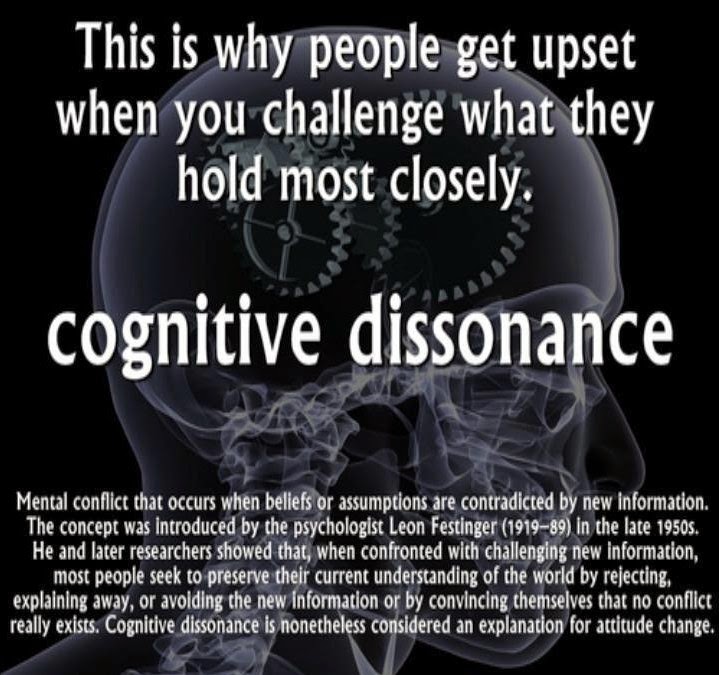 Email ThisBlogThis!Share to TwitterShare to FacebookShare to Pinterest
Labels: 9/11, WTC