Americans say yes, Republicans say no on working with Obama
Rachel Maddow points out that Republicans have embraced a policy of denying President Obama anything he pursues, despite the preference by Americans overall, as shown in a new Pew survey, that they work together.

Notice the outright hypocrisy of the GOP, which they maintain by controlling the only news outlets that the Republicans will listen to:


Bogus story exposes risks of conservative ‘invented news’ - Rachel Maddow shows the right-wing hypocrisy on prostitution scandals when the political advantage is in their favor, and points out the danger of the conservative movement’s preference of their own version of news instead of real news.

Conservative media creates parallel universe
Rachel Maddow discusses how the conservative media has built a narrative based on what people want to hear, not on the facts, about President Obama’s nominee for Attorney General Loretta Lynch. 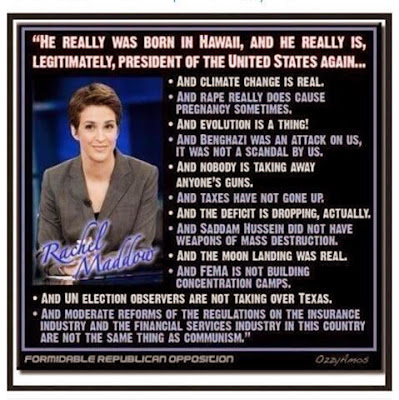 Colbert Report: Tip/Wag - Breitbart
Breitbart News publishes an article that could have completely destroyed the credibility of Obama's pick for attorney general, Loretta Lynch -- if it wasn't completely untrue. (3:31) 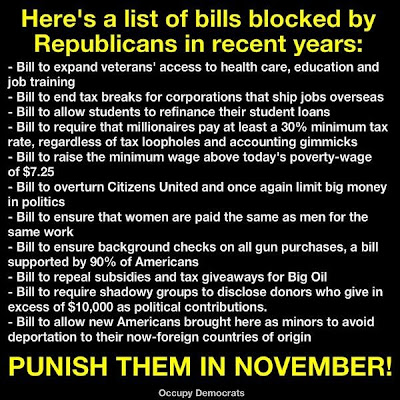 Above: George Bush increased the debt ceiling in 2002, 2003, 2004, 2006. 2007 and twice in 2008 (The Democrats have used the same strategy, though ineffectually i.e. they are cowards) Rather than defaulting on debts it makes more sense to raise the ceiling and solve the budget problem. THEN, over time, the debt will decrease if that is how the budget is balanced.

Here is the hypocritical plan McConnel came up with...


1. "I would advocate that we pass legislation giving the president the authority to REQUEST of us an increase in the debt ceiling that would take us past the end of his term" - "that [legislation] would be subject to disapproval. That resolution of disapproval, if passed, would then go to the president, he could sign it or he could veto it." - McConnell - Theme: Passing legislation to 'disapprove it later.

2. "The reason default is no better idea today than when Newt Gengrich tried it in 1995, is it destroys your brand [i.e. America's credit rating] and would give the president the opportunity to blame Republicans for bad economy" - Defaulting was seriously tried by Newt in 1995.

3. "Look, he owns the economy. He's been in office almost 3 years now and we refuse to let him entice us into co-ownership of a bad economy" McConnel - The co-ownership is referring to the United states economy.

Important Republican Party Position: McConnel admits that making sure Obama is a one term President is his primary political goal. This means that the worse the economy is the better chances are that Obama will be a one term president.

At one point, McConnell said: "I have little question that as long as this president is in the Oval Office, a real solution is unattainable." In an interview with CBS News, the president noted that McConnell has described his major political goal as making Obama a one-term president. 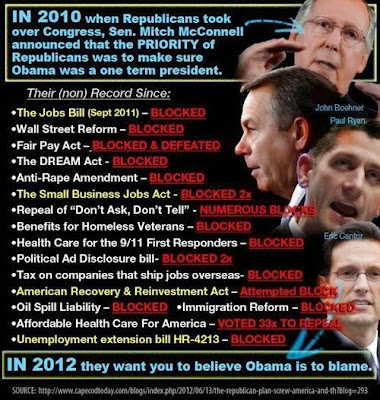 A lame duck Congress doesn’t have to be so lame
Rachel Maddow points out to Senate Democrats that just because they’ll be losing the majority, that doesn’t mean they can’t do anything with the time they have left, particularly with President Obama’s nomination for Attorney General, Loretta Lynch, awaiting confirmation.

White House presses Senate on nominations over impulsive political defense
Rachel Maddow points out politically impulsive behavior by Senate Democrats that are ostensibly strategy based, but are actually foreseeably damaging to the Democratic image and political interests, as well as President Obama’s policy priorities.

NRA’s midterm failures encourage push for surgeon general
Sabrina Siddiqui, political reporter for The Huffington Post, talks with Rachel Maddow about the renewed push to confirm Vivek Murthy as surgeon general in the wake of the Ebola scare and now that the NRA has performed poorly in the midterm elections.

{Debt Ceiling History Example} The GOP's/FoxNews's Primary Goal Is To Do Anything To Win Elections INCLUDING Destroying The Economy If Necessary!


GOP/Tea-Party Nonsense In A Nutshell: Outsiders are "Nazis"


GOP VS Ron Paul: A Return To The Suppressed Republican Primaries


Ayn Rand & The Beginning Of The End Of Objectivism


Commentary On Ayn Rand's "For The New Intellectual"

US: Our Court System Is Divided On Party Lines!


An Introduction To The GOP's War On Women