Notes: 1. Compares socialism and redistribution rhetoric to Santa giving gifts on Christmas, 2. Compares socialism to helping people, for example, Jesus to a socialist (he redistributed loaves of bread and fish), 3. Rhetoric accuses Obama of being a Marxist, 4. Republicans are creating fear about Obama calling him a communist/socialist and scaring people into thinking that they will lose all they own as it will get 'redistributed'.


1: any of various economic and political theories advocating collective or governmental ownership and administration of the means of production and distribution of goods
2
a : a system of society or group living in which there is no private property b : a system or condition of society in which the means of production are owned and controlled by the state
3
: a stage of society in Marxist theory transitional between capitalism and communism and distinguished by unequal distribution of goods and pay according to work done 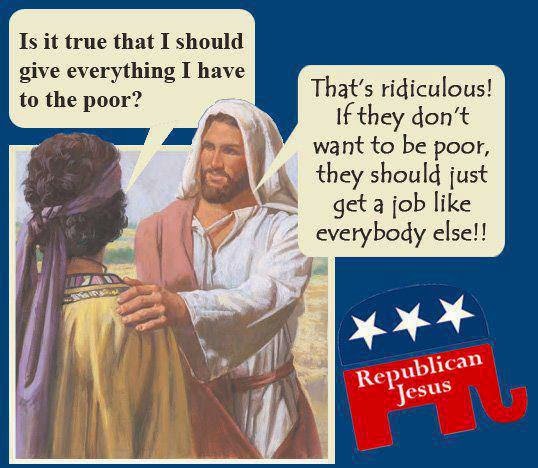 For many, summer means vacation, sports, camping or just time off to relax, but not for millions of kids living in poverty in the United States. There are few camps or beach trips for them, and sometimes not even three meals a day. During the school year, public schools provide breakfast and lunch to millions of students in the United States. But when summer arrives, parents struggling to feed their children can no longer rely on those meals.


2. Republicans have classified any help to anyone as 'socialism'. However, That goes against the principles of Christianity and is more in-line with the fictional teachings of Ayn Rand.

Ayn Rand's philosophy is of rational self interest and she states that the purpose of life is in pursuing your own happiness with NO regard for others well-being...

Notes: 1. She claims to be challenging the moral code of altruism, 2. Altriusm is immoral is it is placed above oneself (i.e. nothing should be above you), and 3. If a man or woman is weak they don't deserve love. 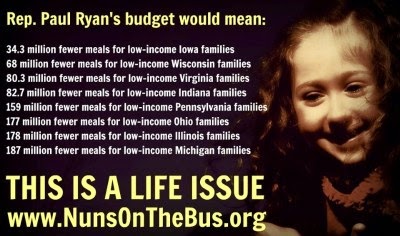 On the other hand...

13 When Jesus heard what had happened, he withdrew by boat privately to a solitary place. Hearing of this, the crowds followed him on foot from the towns. 14 When Jesus landed and saw a large crowd, he had compassion on them and healed their sick.

15 As evening approached, the disciples came to him and said, “This is a remote place, and it’s already getting late. Send the crowds away, so they can go to the villages and buy themselves some food.”

16 Jesus replied, “They do not need to go away. You give them something to eat.”

17 “We have here only five loaves of bread and two fish,” they answered.

18 “Bring them here to me,” he said. 19 And he directed the people to sit down on the grass. Taking the five loaves and the two fish and looking up to heaven, he gave thanks and broke the loaves. Then he gave them to the disciples, and the disciples gave them to the people. 20 They all ate and were satisfied, and the disciples picked up twelve basketfuls of broken pieces that were left over. 21 The number of those who ate was about five thousand men, besides women and children.


3. Rhetoric accuses Obama of being a Marxist


An explanation of Socialism and Marxism:

Socialism—defined as a centrally planned economy in which the government controls all means of production—was the tragic failure of the twentieth century. Born of a commitment to remedy the economic and moral defects of capitalism, it has far surpassed capitalism in both economic malfunction and moral cruelty. Yet the idea and the ideal of socialism linger on. Whether socialism in some form will eventually return as a major organizing force in human affairs is unknown, but no one can accurately appraise its prospects who has not taken into account the dramatic story of its rise and fall.

The Birth of Socialist Planning

It is often thought that the idea of socialism derives from the work of Karl Marx. In fact, Marx wrote only a few pages about socialism, as either a moral or a practical blueprint for society. The true architect of a socialist order was Lenin, who first faced the practical difficulties of organizing an economic system without the driving incentives of profit seeking or the self-generating constraints of competition. Lenin began from the long-standing delusion that economic organization would become less complex once the profit drive and the market mechanism had been dispensed with—“as self-evident,” he wrote, as “the extraordinarily simple operations of watching, recording, and issuing receipts, within the reach of anybody who can read and write and knows the first four rules of arithmetic.”


In fact, economic life pursued under these first four rules rapidly became so disorganized that within four years of the 1917 revolution, Soviet production had fallen to 14 percent of its prerevolutionary level. By 1921 Lenin was forced to institute the New Economic Policy (NEP), a partial return to the market incentives of capitalism. This brief mixture of socialism and capitalism came to an end in 1927 after Stalin instituted the process of forced collectivization that was to mobilize Russian resources for its leap into industrial power.


It is obvious that the Democrats under Obama do not control all the means of production. And the big fuss over the 'redistribution of income' is a renaming done by the republicans... to win an election! (afterall, they are talking about a 2-3% tax increase which doesn't even remotely come under the banner of 'government controlling all means of production'). IN the process of creating propaganda to defeat Obama in the next elections the definition of Socialism has been destroyed.

So much fuss over a 2% tax increase! (Note: If someone says 'a 2-3% tax increase om the super rich is not fair', explain tax burden to them... this is obviously a case of renaming something for the purposes of marketing a political message irrespective of the reality behind what is being said... this is another form of lying or deception)

Was the word 'socialist' created to scare children? The Daily Show Correspondents explain...