A simple chain of logic:


Question: What Do the Koch Brothers Want?


1. The Governmental structure we have was given to us by our #Constitution.

2. My goal is to cut government in half in twenty-five years, to get it down to the size where we can drown it in the bathtub. - Grover Norquist

3. Koch Brothers want: "a nation steeped in anarchy where peasants are at the mercy of a few wealthy industrialists."


The Daily Show: The Koch Brothers become The Daily Show's latest sponsor, prompting Jon to welcome them with some minor adjustments to their advertisement. (4:12):

Now read the following extract (doesn't it seem like the Koch Brothers have begun the process of buying off the Democrats as well becoming almost like Kings? Is this the next step in our evolution? From war profiteers to oligarchs to a representative Kingship?)

Thinkprogress: The Koch brothers and their political allies quietly funneled $250 million to conservative causes last year through a secret tax-exempt organization called Freedom Partners, Politico reportedWednesday. But while the group’s website claims its top priorities including fighting runaway stimulus spending and “corporate welfare,” its donations included a $2 million gift to the U.S. Chamber of Commerce, perhaps the strongest backer of such efforts.

But forget the chamber of commerce, they could have gone directly to the Koch brothers themselves, who benefit enormously from a huge range of tax breaks, subsidies, free government services and state and federal contracts.

– The dirty secret of Koch Industries is its birth under the centrally-planned Soviet Union. Fred Koch, the founder of the company and father of David and Charles, helped constructfifteen oil refineries for Joseph Stalin before expanding the business in the United States.
– As Yasha Levine has reported, Koch exploits a number of government programs for profit. For instance, Georgia Pacific, a timber company subsidiary of Koch Industries, uses taxpayer money provided by the U.S. Forestry Service to provide their loggers with taxpayer-funded roads and access to virgin growth forests. “Logging companies such as Georgia-Pacific strip lands bare, destroy vast acreages and pay only a small fee to the federal government in proportion to what they take from the public,” according to the Institute for Public Accuracy. Levine alsonotes that Koch’s cattle ranching company, Matador Cattle Company, uses a New Deal program to profit off federal land for free.
– Koch Industries won massive government contracts using their close relationship with the Bush administration. The Bush administration, in a deal even conservatives alleged was a quid pro quo because of Koch’s campaign donations, handed Koch Industries a lucrative contract to supply the nation’s Strategic Petroleum Reserve with 8 million barrels of crude oil. The SPR deal, done initially in 2002, was renewed in 2004 by Bush administration officials. During the occupation of Iraq, Koch wonsignificant contracts to buy Iraqi crude oil.
– Although Koch campaigned vigorously against health reform — running attack ads, sponsoring anti-health reform Tea Parties, and comparing health reform to the Holocaust — Koch Industriesapplied for health reform subsidies made possible by the Obama administration.
– The Koch brothers have claimed that they oppose government intervention in the market, but Koch Industries lobbies aggressively for taxpayer handouts. In Alaska, blogger Andrew Halcro reported that a Koch subsidiary in Fairbanks asked Gov. Sarah Palin’s administration to use taxpayer money to bail out one of their failing refinery.
– SolveClimate recently reported that Koch Industries will reap huge profits from the proposed Keystone XL Pipeline, which runs from Koch-owned tar sands mining centers in Canada to Koch-owned refineries in Texas. To build the pipeline, politicians throughout the Midwest, many of whom have received large Koch campaign donations, have used eminent domain — government seizures of private land. In Kansas, where Koch-funded officials advise Gov. Sam Brownback (R-KS) and the Republican legislature, the Keystone XL Pipeline is likely to receive a property tax exemption of ten years, a special loopholethat will cost Kansas taxpayers about $50 million.

Now forget all the above for just a second and focus on this one thing:


This is perfectly in line with Dick Cheney's profiteering from the Iraq War.


What else have the Koch Brothers profited from without our knowing about it?

What should be clear by now is that the Koch Brothers certainly need to be investigated, transparently AND publicly.

Can the rich influence the 'masses' to do thier bidding? 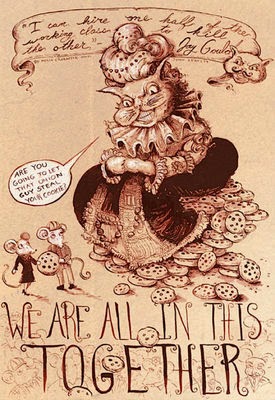 I was looking for an image of an old labor movement poster that had the fat cat asking the mouse “You going let that union guy steal your cookie?” which I’ve always thought was the ultimate stick in the eye to working class people who watch Fox News and believe billionaire “job creators” deserve t...


Moyers & Company 101: On Winner Take All Politics from BillMoyers.com on Vimeo.

‎"The Koch Brothers are worth $50 billion. They’ve bankrolled the Tea Party, the campaign against climate change science, and entire university departments to advance their right-wing agenda. The newest item on their shopping list: their own Center for American Progress."

The following is from Koch Brothers Exposed

This film and investigation connects the dots and reveals why the Koch brothers are trying to end public education and how their wealth winds up in the hands of Jim Crow. Watch the video, then call David Koch and tell him to stop funding school resegregation now. His number is 212-319-1100.

Will you help Senator Sanders expose the Koch Echo Chamber?

2. From Politifact.com (On Obama's health care bill): Still, there's little doubt that Heritage has been a consistent and eager promoter of the exchange idea, especially during the effort to design a new health care system for Massachusetts. That effort concluded with the Democratic legislature joining with the Republican governor, Romney, to implement a system that includes a health insurance exchange. On numerous occasions, Heritage scholars wrote approvingly of the exchange system in Massachusetts, known as the Connector. In a paper about the Massachusetts plan published on April 11, 2006, Edmund Haislmaier, a Heritage fellow in health care policy, wrote of the "truly significant and transformative health system changes that the legislation would set in motion."

3. A discussion on Fox "News": Does President Obama have an “enemies list”? That’s the provocative allegation put forth by Ted Olson in the Wall Street Journal. Olson is a former member of the Bush Administration as well as representative of the Koch Brothers who just so happen to be the only real people Olson thinks is on this supposed list. So, does the list exist? That’s what The Five asked in the top segment today.

Explanation: Heritage is a Koch created and funded institute (... and read above to see where Obama got his healthcare idea from... i.e. it's a trap for the general elections - 'Keep your friends close and...')

1. "Before joining Heritage in June 2007, Loris was an associate at the Charles G. Koch Charitable Foundation, immersing himself for a year in a market-based management program."  ,


The Koch Brothers Are Involved In Election Fraud In Wisconsin


Koch Brothers May Be Into Segregation Because Of Their Communist Roots


Koch Brothers Own A Stake In The Keystone XL Pipeline THAT's Why Fox News is Promoting It! (or in the tar sands oil - there seems to be some confusion on this point)

Liberal Libertarianism.org: The Koch Brothers Seem To Be Buying The Keystone XL Pipeline With Their Supporters Using Lies As Their Primary Marketing Tactic!