The more I think about it the more World War 2 seems like a Christian Civil War. 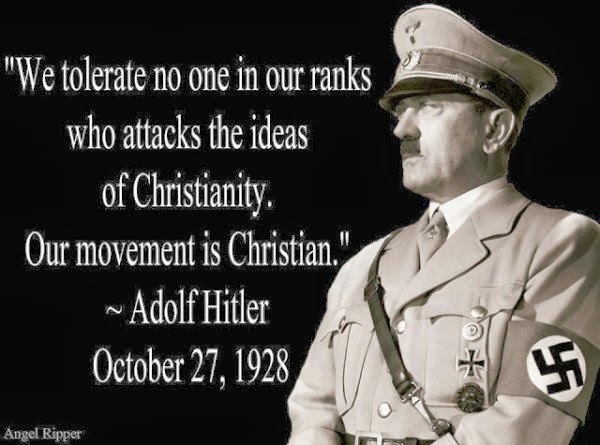 What Hitler tried to do was no less than what Constantine actually accomplished (Was Hitler following in Constantine's footsteps?). If Hitler had won would we be talking of Hitler like an emperor of Christianity like we do with Constantine?

In any case, Hitler followed certain verses of the Old Testament;

Numbers 31: 17-1817. Now therefore kill every male among the little ones, and kill every woman that hath known man by lying with him.18. But all the women children, that have not known a man by lying with him, keep alive for yourselves.Deuteronomy 20:16However, in the cities of the nations the Lord your God is giving you as an inheritance, do not leave alive anything that breathes.1 Samuel 15:2-42 Thus saith the LORD of hosts, I remember that which Amalek did to Israel, how he laid wait for him in the way, when he came up from Egypt.3 Now go and smite Amalek, and utterly destroy all that they have, and spare them not; but slay both man and woman, infant and suckling, ox and sheep, camel and ass.4 And Saul gathered the people together, and numbered them in Telaim, two hundred thousand footmen, and ten thousand men of Judah.

And since what a Christian group believes is pretty much dependent on thier pastor, the Nazis do constitute a valid Christian group. Also, acceptance of Nazi scientists in Texas makes even more sense.