The State Of US Education & The Dumbing Down Of America

Problems With The "No Child Left Behind" Act In 3 Interviews

The Fall Of Educational Standards & Rise Of Child Abuse In the USA Can Be Traced To Texas!


“Anti-intellectualism has been a constant thread winding its way through our political and cultural life, nurtured by the false notion that democracy means that 'my ignorance is just as good as your knowledge.'” ― Isaac Asimov

This post shows (with interviews, explanations and statistics) how the education department in the United States has drifted so far away from proper education that it has become a danger to children and society.

1. Education is an economic indicator for growth and productive labor force.
2. US is ranked low in math, but number 1 in confidence of math scores i.e. students think they know when they don't... the height of stupidity!

Conclusion: People are dropping out at a higher rate, and more money is put into prisons which is a growing industry!

1. Wants kids to grow up and become tax payers not criminals - (i.e. investment in intellectual capital)
2. Less education means more criminality and greater population in prisons which is a great business. (Check out Cheney's prison income!)
3. Theme investment in intellectual capital for future economics growth (boost in productivity and technological development)
4. Level playing field is what must be done with education for a functioning democracy.

Links for "profits from private prisons":

‎1. "Corporations are running many Americans prisons, but will they put profits before prisoners?"
‎2. "A grand jury in south Texas indicted Mr Cheney and Alberto Gonzales, the former Attorney General, on state charges that they blocked an investigation into the mistreatment of prisoners.

Where society is heading (statistical graphs)...

Alternative method to teaching: It's backwards to teach obedience over critical thinking...
Science, Ancient Greeks, Educare and critical thinking skills using "The Socratic Method"
In the dialogue ‘Meno’ Socrates shows that even an uneducated peasant can understand advanced geometry(extract below). Simply by asking questions that allowed the person to deduce what the answers were from their own understanding and experience. This method has become known as the ‘Socratic Method’ and I think Plato's dialogue 'Meno' is our first written demonstration of this method. Contrasting this method to the one used in modern schools you might notice that a student is told what is right and what isn’t. He/she is taught a formula and then told to solve equation. This approach assumes that the student doesn’t know, cannot infer and must be stuffed with knowledge/information. This process of ‘stuffing’ a student makes a student believe that they have learn’t something(random facts) and creates an illusion that they know. Education comes from the word educare which means to “draw forth”

Why is is so important to use a scientific/Socratic-method in education?
Because...
Science has a built in self correcting mechanism...

The Colbert Report Get More: Colbert Report Full Episodes,Political Humor & Satire Blog,Video Archive
Michael Shermer discusses his book about how the human brain evolved to assume rather than doubt.

Why has this basic method of education not been included in the Federal education curriculum while out of date textbooks are? (see links below for further info)

This question brings me to my last segment...


The Deliberate Dumbing Down of America

Colbert Report: An MIT study finds that longer essays get better scores, so ideally your writing section should read like Glenn Beck's teleprompter. (05:07)...

At 2 minutes:
MIT study found that SAT essays have to be long to get get scores and errors are irrelevant...
Allowing less than par work to get higher scores!


Self-confidence hasn't helped raise test scores in U.S.
Then came the U.S., which had scores very close to the average of all countries tested.
Most countries scored below or well-below average, including Russia, many Middle Eastern countries and all the participating countries south of the U.S.
The performance of U.S. students is a major disappointment for the U.S. educational establishment. Some educators note that U.S. scores are higher if the scores of recent immigrants are left out. But that also applies to many other countries.
There's a tarnished silver lining in the average scores of U.S. students. Those who dismiss competition and proclaim every student a winner or a hero have been very successful, because U.S. students get above-average marks for self-esteem and confidence.
For example, according to the 2003 and 2007 Trends in International Mathematics and Science Study, most U.S. eighth-grade students are very confident about their mathematics abilities. Yet they are consistently outscored by Asian students with much less confidence in their math abilities. Clearly, lower wages may not be the only reason many U.S. technology firms have moved factories to Asian countries that consistently outscore U.S. students in math and science.
Some say more money will solve the education crisis. Andrew Coulson disagrees. In an article in the Washington Post, Coulson claimed that the annual cost per child in the poorly performing Washington, D.C., public school system is nearly $25,000. That's significantly more than the tuition of private schools in the area, including the prestigious Sidwell Friends School attended by the daughters of presidents.
Read more: http://www.mysanantonio.com/life/life_columnists/forrest_mims/article/Self-confidence-hasn-t-helped-raise-test-scores-944390.php#ixzz1o6zZFSEt

This video is just a brief introduction to a very serious subject. There are six books listed at the end which will go much further into the subject...

From one of Rockafella's Foundations:  Schools across the nation are held accountable under the No Child Left Behind Act (NCLB) for raising student achievement in math and reading. But each state gets to be its own policeman by designing the tests its students take and determining the scores that count as success. The National Assessment of Educational Progress (NAEP), administered every two years in grades 4 and 8 to representative samples of students from each state, serves as a check on what the states report using their own assessments. It also provides a measure of trend over time, something that is often lacking in the states’ own data because of frequent changes in state assessments. (see problems with the "No Child Left Behind Act" below...) 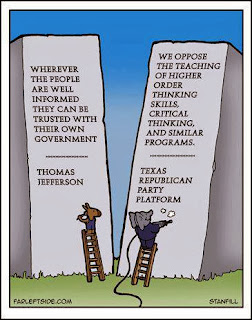