The Hidden Sexism Of Clothing?

Has anyone thought of doing a study on Sexism and Clothing? For example: Why are all men covered up from neck to toe but women are not? Wouldn't it be more appropriate if all men wore kilts or if all women wore pants? What about V-Necks? Why do men not wear em but women do? What would it be like if a man and woman were sitting side by side on TV in skirts and V necks? Would it look funny initially followed by acceptance? If the sexes are to be equal... shouldn't their clothing be equal too? At the very least make the men wear shorts! If men and women are wearing the same amount of clothing - appropriate to their culture - wouldn't such incidents drop down to zero?...

The daughter of the founder of Boing Boing was 'shamed' and 'humiliated' by a Transportation Security Agency officer at LAX. 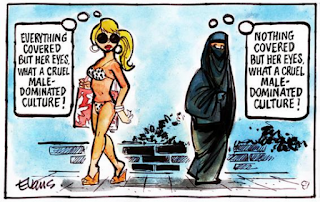 Notes based on looking at the conservation on the blog post where I found the above image:

1. Anything put on a pedestal of any sort becomes a "object" - One challenge is the "It" VS "Thou" problem of consciousness first outlined by Martin Buber.  -

2. Burqa (complete Hijab above) originates from Damascus and was originally a way for rich patriarchs to hide their women (who were "bought" on their beauty, or so it seems). Like the people of Argentina who switched to brown bread from white bread because their President did showing them it was cool... the poor copied the rich to show that they could afford to cover their women as well. The way this keyboard I'm typing on became a tradition because the letters were scrambled to slow down types because the machines were too slow and now everyone is used to this keyboard and don't want to change, so it is with the Arabs who adopted such Hijab ... who represent the opposite extreme of the 'objectification of women'.

3. With greater freedom of expression(see related movie below), different brain structures, and cover-ups in the media - women will naturally gravitate towards wanting to be the center of attention i.e. in the same way that alpha males gravitate towards to top of the pack - in their societal quest to find a good husband. These techniques to attract attention can become extreme which leads to some very strange responses such as the one by Todd Akin, echoed by Steve King and Paul Ryan etc. Who represent a small but powerful - & ancient = patriarchal mythological group structure.

Related Movie:George looks across the street and sees the dummy in the department store window dressed differently. Bemused by the changing fashions, George continues to watch the clothes on the dummy change as he continues his journey into the future


4. Also notice how "savages"(notice how their clothing is equal!), so called by the English Explorers, tend to be bare chested - both males and females . The key here is Anchoring. A person growing up around bare breasted females will not find bare breasts to be a big deal. In the same way just seeing an outline of breasts may freak an Arab out.


Conclusion: I think the key to understanding modern problems between the sexes lies in the culture and elements seeking to cause trouble (ex. Fox News)

Why do short shorts make a guy gay but not a woman a lesbian (proof of sexism in clothing)?...