An example of modern "Corporatism/Socialism":

A Bloomberg report reveals that the U.S. government loaned banks $7.7 trillion in secret bailout funds at no interest and then borrowed the money back at interest.

How was the Bail out money used? The big banks make money by taking the bailout money we gave them and lending it back to the government with interest. http://www.thedailyshow.com/watch/thu-december-1-2011/america-s-next-tarp-model

http://www.bloomberg.com/news/2011-11-28/secret-fed-loans-undisclosed-to-congress-gave-banks-13-billion-in-income.html Saved by the bailout, bankers lobbied against government regulations, a job made easier by the Fed, which never disclosed the details of the rescue to lawmakers even as Congress doled out more money and debated new rules aimed at preventing the next collapse.A fresh narrative of the financial crisis of 2007 to 2009 emerges from 29,000 pages of Fed documents obtained under the Freedom of Information Act and central bank records of more than 21,000 transactions. While Fed officials say that almost all of the loans were repaid and there have been no losses, details suggest taxpayers paid a price beyond dollars as the secret funding helped preserve a broken status quo and enabled the biggest banks to grow even bigger.‘Change Their Votes’“When you see the dollars the banks got, it’s hard to make the case these were successful institutions,” says Sherrod Brown, a Democratic Senator from Ohio who in 2010 introduced an unsuccessful bill to limit bank size. “This is an issue that can unite the Tea Party and Occupy Wall Street. There are lawmakers in both parties who would change their votes now.”The size of the bailout came to light after Bloomberg LP, the parent of Bloomberg News, won a court case against the Fed and a group of the biggest U.S. banks called Clearing House Association LLC to force lending details into the open.The Fed, headed by Chairman Ben S. Bernanke, argued that revealing borrower details would create a stigma -- investors and counterparties would shun firms that used the central bank as lender of last resort -- and that needy institutions would be reluctant to borrow in the next crisis. Clearing House Association fought Bloomberg’s lawsuit up to the U.S. Supreme Court, which declined to hear the banks’ appeal in March 2011.$7.77 TrillionThe amount of money the central bank parceled out was surprising even to Gary H. Stern, president of the Federal Reserve Bank of Minneapolis from 1985 to 2009, who says he “wasn’t aware of the magnitude.” It dwarfed the Treasury Department’s better-known $700 billion Troubled Asset Relief Program, or TARP. Add up guarantees and lending limits, and the Fed had committed $7.77 trillion as of March 2009 to rescuing the financial system, more than half the value of everything produced in the U.S. that year.


HSBC: Helping People Who Want to Kill You Since 1991 - HSBC compliance chief David Bagley testifies amid a government investigation revealing his bank laundered billions of dollars for Mexican cartels and Al Qaeda moneymen. 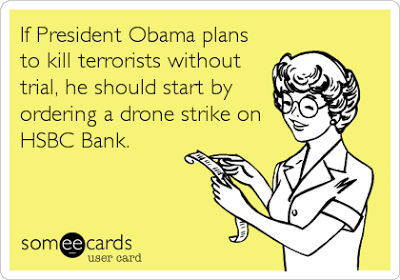 The Warning: Long before the meltdown, one woman tried to warn about a threat to the financial system (i.e. involving the banks).

Watch The Warning on PBS. See more from FRONTLINE.


Also check out Senator Bernie Sanders video and Fareed Zakaria's video in my post from 2 years ago.

"When this financial crisis began nearly four years ago the story seemed simple. The banks were broke and they told our leaders that unless the taxpayers bailed them out and took their private debts on to the public account, then the world would end. Our politicians believed them. We took on huge debts and bailed out the banks. Right or wrong, at least the story seemed straightforward: they owed us huge sums of money. Then as the crisis continued, a new group most of us had never heard of appeared – the bond holders. It turned out the banks owed huge sums to the bond holders too, and so did we. The story of who owed whom began to change. - Gradually the story became less about the banks owing us money and more about owing the bond holders. - It seems to me that our governments and their financial advisers from the banks have a double standard when it comes to debt and its repayment; one which greatly benefits the financial world and punishes the taxpayer. - On the one hand, the debts of private banks and those who own that debt, the bond holders, are being protected from any losses by the publicly funded bailouts. Public debt, on the other hand, at the insistence of the same banks and bond holders we have bailed out, is being paid down at breakneck speed, no matter what the cost in unemployment and the destruction of social services." http://www.guardian.co.uk/commentisfree/2011/jul/11/banking-bond-holders-debt