Specialization: Learning More & More About Less & Less Till, Eventually, You Know Everything About Nothing

There are many different theories as to why the last civilization ended.  I think it was us. In other words, regular Homo Sapian Sapiens. Also, I think Netherlands were just another form of humans. Finally I think Archaeologists are good at mechanical tasks (read Zen and the Art of Motorcycle maintenance) but not theoretical tasks. So if you want an archaeologist to understand what something was made of or you want them to dig something out for you, then they can accomplish that task. Ask them to put a culture in context and they can't do that cause their training isn't in culture or civilizations. Nor do they read anything outside of their field.

For example: Ask an archaeologist and they will give you a ton of different reasons for why they classify neanderthals as a different species. The major one is the head/brain size...

Here is a graphic example of this theory (the one on the right is supposed to be Neanderthal)... 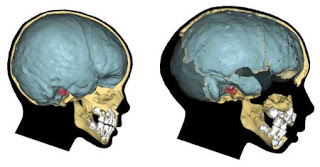 Is there a scientific theory to explain the huge variation in skull shapes and sizes in ancient humans and modern humans (of the various races)?

Yes, for Neanderthals in particular but it applies to all theories connecting humans to apes and other species through skull sizes, for example: pygmies will have smaller heads than a gorilla but its doesn't mean a gorilla is smarter, ...


ScienceDaily (Aug. 16, 2007) — Chance, not natural selection, best explains why the modern human skull looks so different from that of its Neanderthal relative, according to a new study led by Tim Weaver, assistant professor of anthropology at UC

"For 150 years, scientists have tried to decipher why Neanderthal skulls are different from those of modern humans," Weaver said. "Most accounts have emphasized natural selection and the possible adaptive value of either Neanderthal or modern human traits. We show that instead, random changes over the past 500,000 years or so – since Neanderthals and modern humans became isolated from each other – are the best explanation for these differences."

Weaver and his colleagues compared cranial measurements of 2,524 modern human skulls and 20 Neanderthal specimens, then contrasted those results with genetic information from a separate sample of 1,056 modern humans.

The scientists concluded that Neanderthals did not develop their protruding mid-faces as an adaptation to icy Pleistocene weather or the demands of using teeth as tools, and the retracted faces of modern humans are not an adaptation for language, as some anthropologists have proposed.

Instead, random "genetic drift" is the likeliest reason for these skull differences.


"Archaic forms of Homo sapiens first appear about 500,000 years ago. The term covers a divers...e group of skulls which have features of both Homo erectus and modern humans. The brain size is larger than erectus and smaller than most modern humans, averaging about 1200 cc, and the skull is more rounded than in erectus. The skeleton and teeth are usually less robust than erectus, but more robust than modern humans. Many still have large brow ridges and receding foreheads and chins. There is no clear dividing line between late erectus and archaic sapiens, and many fossils between 500,000 and 200,000 years ago are difficult to classify as one or the other. "

What would a Neanderthal look like today? (Notice skull shape & size) 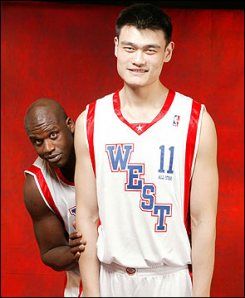 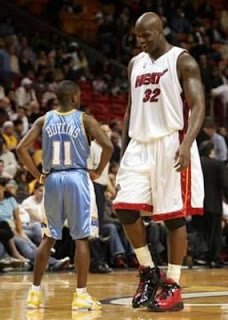 What about two species of Neanderthal standing side by side? 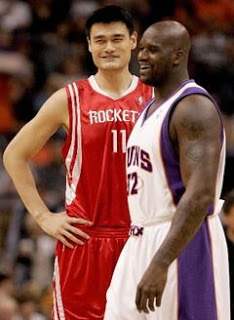 In other words, there is no evidence supporting this theory except what they must have learned in their textbooks (my majors were in economics and religion so I have no idea what Archaeologists were taught, but I read allot of books and know how to study subjects by myself). Archaeologists are specialists in mechanical stuff NOT theoretical stuff. As this post is proves, I hope.


Images: Neanderthals - Proof that the artist's perception influences his or her art

The Fragmentation of Knowledge Part 1 [Or, The case against over-specialization in theory based academics]

Plato's Atlantis Found! It's Buried On The Floor Of The Atlantic


Simple explanation for why skull/brain size doesn't affect intelligence. i.e. its the INTER-CONNECTIVITY between brain cells that explains intelligence.


Let me give you an example of how easy it is to make up theories:

When you find one bone, according to statistics, you have a sample size of 1 (you can extrapolate from there the same way a fiction writer extrapolates part 7 of Star Wars, it can be done. It shouldn't be in the news section of a website). You can't make any conjectures about what a culture or society was like based on finding a bone. It's why I always say, "If you want to hear some good bullshit from someone who genuinely believes what they are saying, despite the tremendous amount of evidence proving them to be wrong, talk to an archaeologist or..." well, lets end it there shall we? 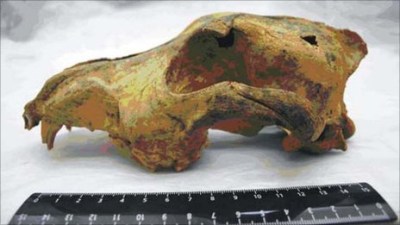 Based on one bone the guy literally describes a whole lifestyle and makes a historic determination i.e. that this was the "early stages of domestication", despite the tons of evidence showing a much older origins to humanity than textbooks will admit to.
I can make up theories based on one data point myself.

... Another dog found in the 'early stages of domestication' but DIDN'T make it into theories of the great Archaeologists...

Police found the approximately 3-year-old, 53-pound female wearing a collar and chain near Elton Street and Vandalia Avenue in East New York on Tuesday evening, according to Richard Gentles, spokesperson for New York Animal Care and Control. "She's not a wild animal," Gentles told the New York Post. "Nobody's come forward to claim her," he added, noting that it is illegal to possess a wolf-dog hybrid in New York City. The animal, which was apparently being kept as a pet, will not be put up for adoption or be freed into the wild. She will be probably be sent to a sanctuary for unwanted wolf-dogs, a spokesman for Animal Care and Control told The Associated Press.

THEORY: This wolf-dog was frozen in ice with his prehistoric owners. When they came out and discovered society had changed they bought their hunting companion a collar as it turns out he's just a pet. Then they find out you can't even keep dogs in the early stages of evolution. SO they got rid of it. See. My theory uses just as much evidence as a modern archaeologist uses, only I'm saying things that are absurd for an average person/thinker/observer. However, since I am only looking at one data point (i.e. one piece of evidence)... I literally have the same amount of evidence as the archaeologists who made up his random theory from finding one skull. It actually makes more sense that dogs already existed alongside humans and one inter-mated with a wolf. But they did find a skull so they have to make something of it or they could find themselves to be not only wrong but in a boring profession that no one wants to hear about... especially if they stick to the conventional theories which are so far gone from normality that even creationism is catching on. Even though the New Testament makes it clear that Genesis is not meant to be taken literally.

How people can take Genesis 1 & Genesis 2 literally is beyond me and probably the main cause of cultural schizophrenia in the west. They literally give a different order or creation. How can you believe two different linear patterns at the same time and not be crazy?

When your foundational beliefs are based on such obvious distortions how can the rest of your belief structure be useful to our current situation? Can you imagine what the world would be like if a bunch of rich Mormons survive a world wide cataclysm  Only the nuttiest of us would survive... can you imagine what that civilization would look like? We have to make this information public properly or the next generation will be much smaller and totally crazy.

Samantha Smith looks at what has been called the most significant historical find ever on Dartmoor - the discovery of an internationally important prehistoric burial site.

The 4,000-year-old remains of the Bronze Age grave or cist, which were found in a peat bog, are set to rewrite the history books.

BBC Inside Out has been given exclusive access to the results of the dig on White Horse Hill, which include an intact cremation deposit, an animal pelt, textiles, ear stud and beads.

Experts say it is unusual for so many organic objects to survive for this length of time in a grave from the Bronze Age period.

Dartmoor National Park Authority, the Wiltshire Conservation Service and other specialists have begun to piece together the story of this important discovery.

Work has moved to laboratories where painstaking investigation is taking place which, it is hoped, will reveal more about the lives of prehistoric people on Dartmoor.


The discovery of a bronze age granite cist, or grave, in 2011 in a peat bog on White Horse Hill revealed the first organic remains found on the moor and a hoard of about 150 beads.

As the National Park's archaeologists levered off the lid they were shocked by what lay beneath.

The park's chief archaeologist, Jane Marchand, said: "Much to our surprise we actually found an intact cremation deposit [human bones] which is actually a burial alongside a number of grave goods.

"What was so unusual was the survival of so many organic objects which you never usually get in a grave of this period, they've long since rotted away."

Amongst the grave goods was an animal pelt, containing a delicate bracelet studded with tin beads, a textile fragment with detailed leather fringing and a woven bag .


Was there another stone slab laying culture in the Bronze Age in Tibet?

Then there are these monolith stones in Tibet from this website:


How would an Archaeologist reconcile this earlier bronze age site?

"Six miles from Urfa, an ancient city in southeastern Turkey, Klaus Schmidt has made one of the most startling archaeological discoveries of our time: massive carved stones about 11,000 years old, crafted and arranged by prehistoric people who had not yet developed metal tools or even pottery. The megaliths predate Stonehenge by some 6,000 years. The place is called Gobekli Tepe
The tallest pillars tower 16 feet and, Schmidt says, weigh between seven and ten tons. As we walk among them, I see that some are blank, while others are elaborately carved: foxes, lions, scorpions and vultures abound, twisting and crawling on the pillars' broad sides."

The tiny three-man submarine Alvin has been the workhorse of ocean research for nearly 50 years - finding new life forms and advancing understanding of the underwater world.

It is nearing the end of a $41m refit and is about to embark on a series of engineering test dives before returning to the ocean for research duties in May.

Robert Ballard explains why ocean exploration is a good investment.


Prediction On Alvin: They won't find any underwater ruins as it's under a ton of dirt.  The Japanese ruins were found because it's pure rock. 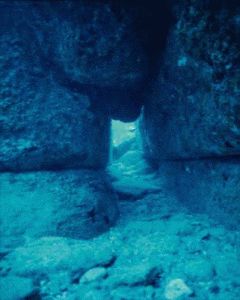