The GOP claims to be true capitalists. This is a quick illustration of what Capitalists are according to the GOP...


Watch the first minute of the following video and you'll notice that Eric Cantor was only willing to help tornado victims in Missouri once spending cuts are made (i.e. caring about the people is not on his agenda unless it fits some old guys understanding of economics - for those who don't know, a countries economy doesn't work the same as your own personal budget)...


"Actual elephants are more useful than the GOP." Jon Stewart

Do you want to know about how "useful" the GOP are?

The speaker of the house voted for spending that led to the current debt...

[Note: He left out the unfunded Bush wars + the huge reduction in taxes for the rich which is the single largest contributor towards the debt i.e. if you don't remove the causes of a problem the problem will persist.]

Note that the GOP won the House i.e. through a type of fraud... 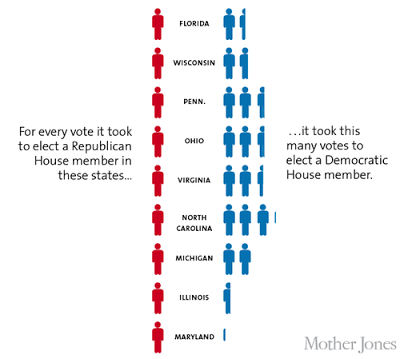 CHART from Mother Jones: Americans didn’t intend to elect a Republican majority to the House of Representatives. But thanks to GOP-engineered redistricting, they did.


Why does the GOP hate everyone?

"Scorn in the U.S.A.: It must be tough for Republicans to love America so much but hate almost three-quarters of the people living in it."(at approx 8 mins into following video)

Notice at 5 mins that the sign in the back of Eric Cantor is "Heritage Foundation" which was started by the Koch Brothers, posted about here and here. Basically, the Koch Brothers tried to start a violent revolution which backfired when OWS showed up as it was on the wrong side. So they began clean-up. At least, that's one way of looking at it.[ For example: From John Stossel of Fox News (a Koch Brother Libertarian?) = "I think it will take visible riots to help people focus on this thing" (an indirect call for violence?) ]

BTW, anyone who wants to take 2% more tax from people who own corporations that are making billions and getting subsidies are called socialists (doesn't matter if they are paying less taxes than everyone else - or no taxes as the case may be)...

Notes:
A. "We gotta start somewhere... that's a million dollars (that we could save) - in contrast to the 700 billion we could save to reduce the deficit from the rich and unfairly untaxed (i.e. there is class warfare but its from the ones who are trying to aggravate people by projecting what they are doing onto Buffet).
B . From fox news: Dont tax the rich but 'broaden the tax base' - ignore/cover over the realty of the tax codes (see these are not real republicans! more proof later). C. Taxing the majority (poor) instead of taxing the minority (super rich by comparison) this is the very definition of despotism.
D. Heritage institute (Koch Brother funded) are trying to create the image of poor being wealthy cause they have normal second world amenities. (i.e. this will lower standard of living).
E. Demonizing (irresponsible animals) the part of society that is suffering from the excess and scamming of certain individuals on wall street etc.

Even Dick Cheney joins in...


This is what a true "capitalist" leader is supposed to be like to the GOP, apparently:

Still Cheney After All These Years


Still Cheney After All These Years

Related:
GOP/Tea-Party Nonsense In A Nutshell: Outsiders ar...
Examples Of How The "Right" Reframes Lies Into "Tr...
Summary of "Socialism", Keynesian Economics & "Road to Serfdom" (by F.A.Hayek)