The Romney campaign asks Rick Scott to downplay Florida's job gains since they only help Obama...


"Bad economic news is great news for Mitt Romney, so conservatives must drag everyone down in the dumps to get America back on track."

Note: This one of of Mitt Romney's friends in the GOP...

Peter King: force behind Muslim hearings was an IRA supporter
Republican senator dismisses critics' attempts to draw a parallel with al-Qaida, arguing the IRA never attacked on US soil 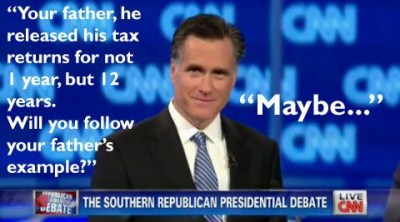 Notice how Republicans are giving Mitt Romney the option of only releasing 6-10 years of taxes... yet Mitt Romney has been in political office since the 1990's. It's sad that Sean Hannity wants to see Obama's college transcripts, which was probably from 30 years ago, but won't ask Romney basic questions that should have been covered earlier in this primary. Mitt Romney won't release his taxes from the beginning of his political career! ... even though we know Congress has been making laws to help them make money through Delaware - Has Mitt Romney used his political influence to make money through robbing someone legally? There is only one way to find out, i.e. complete transparency of financial records.


"We've given all you people need to know and understand about our financial situation and how we live our life." *Waves Hand* Ann Romney 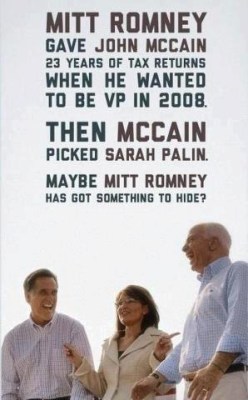 Mitt says he will be a better "job creator" because of his business experience but he can't prove he actually created ANY jobs while being at Bain!

BUT Mitt Romney can't even prove the measly 100,000 "net jobs" he claims to have added over the years...

"Mitt Romney says he created 100,000 jobs while at Bain Capital. Anderson Cooper is Keeping Them Honest."


Romney's Account of His Departure From Bain Undercut by...Romney Testimony
In a previously unreported remark, Romney indicated he went through a "transition" at Bain after heading to Utah in February 1999.

From Maddow Blog
Mitt Romney's campaign is still wrestling with when he left Bain Capital. Over the weekend, they tried saying he "actually retired retroactively."

And these documents challenge Romney's claim that he left Bain Capital in early 1999.

Earlier this year, Mitt Romney nearly landed in a politically perilous controversy when the Huffington Post reported that in 1999 the GOP presidential candidate had been part of an investment group that invested $75 million in Stericycle, a medical-waste disposal firm that has been attacked by anti-abortion groups for disposing aborted fetuses collected from family planning clinics. Coming during the heat of the GOP primaries, as Romney tried to sell South Carolina Republicans on his pro-life bona fides, the revelation had the potential to damage the candidate's reputation among values voters already suspicious of his shifting position on abortion.

The GOP candidate says he started a "small company" ... with $37 million

AMPA – Everybody loves small-business owners and tonight Mitt Romney will pretend to be one. “When I was 37, I helped start a small company,” his speech reads, according to excerpts released early. ”That business we started with 10 people has now grown into a great American success story. Some of the companies we helped start are names you know,” he adds. The section comes just after Romney extolls the virtue and industrious of the small-business entrepreneurs.

Of course, the “small company” he refers to is Bain Capital. Bain was started with $37 million in initial capital, much of it raised from wealthy foreign donors. The company was spun off of Bain & Co., an unquestionable giant in the massive international consulting industry. The company quickly invested millions in other companies and grew rapidly, and has $66 billion under management, as of January.

“Small” is obviously a relative term, but considering that the average start-up cost for small business is as low as $10,000, or  1/3,700 of what Romney started his company with, he may be taking some serious poetic licensee. 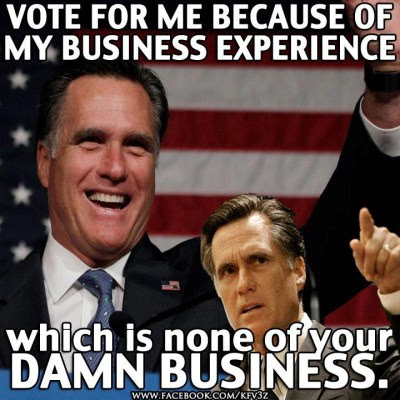 
Rachel Maddow On His EIGHT Companies In The Cayman Tax Shelters...


Visit NBCNews.com for breaking news, world news, and news about the economy

1. Proof of Mitt Romney TAKING a bailout from The Rolling Stone...

2. PROOF THAT MITT ROMNEY HAS CONNECTIONS TO THE PEOPLE WHO LENT OUT TRILLIONS OF DOLLARS (IS THIS PART OF THE REASON WHY HE'S HIDING HIS TAXES SO DESPERATELY?)...

VIDEO: In 2002 Mitt Romney touted D.C. connections, ability to get millions of taxpayer dollars from federal gov’t
Back in March, ABC reported the following, but it’s likely that fewer people were paying attention, so, it’s time to revive the story:


In a long-forgotten tape from the 2002 Massachusetts governor’s race obtained by ABC News, Mitt Romney is seen touting his Washington connections and his ability to get millions of taxpayer dollars from the federal government.
“I am big believer in getting money where the money is,” Romney says on the video, “The money is in Washington.”

Gasp! What a commie socialist!
Just one more example of his blatant hypocrisy.

Alternate Video Site - FROM ABC:
In a long-forgotten tape from the 2002 Massachusetts governor’s race obtained by ABC News, Mitt Romney is seen touting his Washington connections and his ability to get millions of taxpayer dollars from the federal government.
“I am big believer in getting money where the money is,” Romney says on the video, “The money is in Washington.”

Where did Romney get all his wealth? It can't be from honorable means if he refuses to show more than 2 and 1/2 years of taxes... especially when he was bragging about how much money he could get from Washington in 2002 (see above). 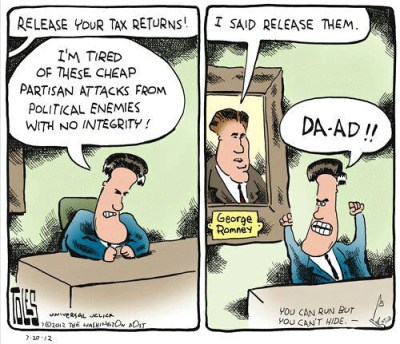 Mitt’s many mansions
Reporters need to start asking Romney about the crisis we face in our housing markets
Housing is a topic that Mitt should know something about. After all, his father, George, served as the nation’s housing secretary during the Nixon administration. And Mitt currently owns three homes, according to Zillow.