In an earlier post I wrote about the idea that wooden objects probably came before objects made out of bone and stone. Wood is easier to work with than stone so it makes sense that wood would be mankind's first work material. To really drive this home I pointed out that if we can find primitive cultures today that still used wood as their main work material for living then that would make a useful model for how primitive cultures and societies in the past must have operated (got this idea for comparison from Campbell).

Here is a long spear or 'dart' like object that was found in melting ice (and thus got bent); 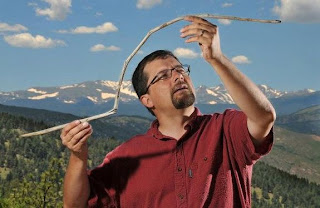 Then, once again, consider the 400,000 year old spears found in Germany:

Little is known about the organic component of Lower and Middle Palaeolithic technologies, particular with respect to wooden tools. Here I describe some wooden throwing spears about 400,000 years old that were discovered in 1995 at the Pleistocene site at Schöningen, Germany. They are thought to be the oldest complete hunting weapons so far discovered to have been used by humans. Found in association with stone tools and the butchered remains of more than ten horses, the spears strongly suggest that systematic hunting, involving foresight, planning and the use of appropriate technology, was part of the behavioural repertoire of pre-modern hominids. The use of sophisticated spears as early as the Middle Pleistocene may mean that many current theories on early human behaviour and culture must be revised.

After going over the evidence above (including the stuff I wrote about earlier), then watch this video with one simple question...how hard would it have been to hunt with wooden spears in our deep deep past?