History: The earliest evidence of ritual and myth part 1

In Dreachenloch and Wildermannlisloch little walls of stone, up to 32 inches high, formed a kind of bin, within which a number of cave-bear skulls had been carefully arranged. Some of these skulls had little stones arranged around them; others were set on slabs; one, very carefully placed, had the long bones of a cave bear (no doubt its own) placed beneath its snout, another had the long bones pushed through the orbits of its eyes.

The cave in Germany, Petershohle, near Velden, which was explored by Konrad Hormann from 1916 to 1922, had closet like niches in the walls, which contained five cave-bear skulls – and once again the leg bones.

Now the cave bear, it must be told, for all its size, was not an extremely dangerous beast. In the first place, it was not carnivorous but herbivorous, and in the second place, like all bears it had to go to sleep in the winter. But during the ice age the winters were long. The bears would go into the caves to sleep and, while there, could be readily killed. In fact, a tribe of men living in the front part of a cave with a couple of sleeping bears in the rear would have had there a kind of living deep freeze. (Page 339)

The following article show us a little about the evidence we have of cave bears; 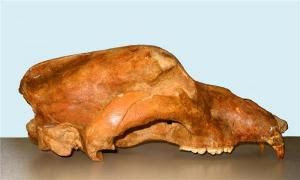 ScienceDaily (Aug. 25, 2010) — The cave bear started to become extinct in Europe 24,000 years ago, but until now the cause was unknown. An international team of scientists has analysed mitochondrial DNA sequences from 17 new fossil samples, and compared these with the modern brown bear. The results show that the decline of the cave bear started 50,000 years ago, and was caused more by human expansion than by climate change.

There is evidence that one species of bear has survived over another simply because they didn't live in caves as a normal part of their behavior pattern. Could this be because of the ancient cave bear cult that hunted this species of bear to extinction?

"The present day brown bear did not suffer the same fate and has survived until today for one simple reason -- brown bears did not depend so heavily on the cave habitat, which was becoming degraded, and this is why they did not follow the same pattern as the cave bears.

"Brown bears rely on less specific shelters for hibernation. In fact, their fossil remains are not very numerous in cave deposits," the Galician researcher says. The definitive extinction of the cave bear "broadly" coincides with the last cooling of the climate during the Pleistocene (between 25,000 and 18,000 years ago), which may have led to a reduction in shelter and the vegetation that the animals fed on.

The cave bear inhabited Europe during the Late Pleistocene and became definitively extinct around 24,000 years ago, although it held out for a few thousand years longer in some areas, such as the north west of the Iberian Peninsula, than in other places. This ursid was a large animal, weighing 500 kg on average, and was largely a herbivore. The bear hibernated in the depths of limestone caves, where the remains of individuals that died during hibernation slowly accumulated over time."


This suggests the possibility that if there was a ritual being played out in the ancient tribes of hunting the cave bear then there would be a large continuum of this culture with obvious signs of thier passing. And there is:

Vestiges of a circumpolar Paleolithic cult of the bear have been identified throughout the arctic, from Finland and Northern Russia, across Siberia and Alaska, to Labrador and Hudson Bay: among the Finns and Lapps, Ostyaks and Vogul, Orotchi of the Amur river region, Gilyaks, Goldi, and peoples of Kamchatka; the Nootka, Tlingit, Kwakiutl, and others of the Northwest American Coast; and the Algonquins of the Northeast. And so here is a northern circumpolar hunting continuum in counterpoise to tha broad equatorial planting belt which we traced from Sudan to the Amazon in Part Two. And just as there a certain depth of time was indicated, going back to perhaps c. 7500 B.C., the dawn of the proto-neolithic, so here too there is a depth in time – but how very much greater! For in the high Alps, in the neighborhood of St. Gallen, and again in Germany, some thirty miles northwest of Nurnberg, near Velden, a series of caves containing the ceremonial arranged skulls of a number of cave bears have been discovered, dating from the period (it is almost incredible!) of Neanderthal Man.(Joseph Campbell, Primitive Mythology page 339)

Here we come to the amazing possibility that neanderthals could be another species of human beings. Well, its kind of implied in the earliest signs of culture that there might be a continuous cultural continuum from ancient times to our own age but this is the first evidence we have of geniune culture and mythological thought. Before I begin my analysis of the evidence of deep thought in some human species, that may have been our evolutionary cousins, I would like to point out one simple fact; Whatever an artist's preconceptions of the neanderthal lifestyle and intelligence may be it is likely that this perspective gets reflected into their illustrations of neanderthals. Consider the following portrayals of ancient Neanderthal Man. 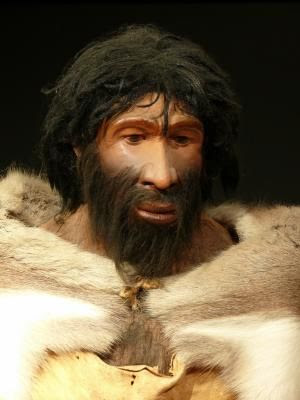 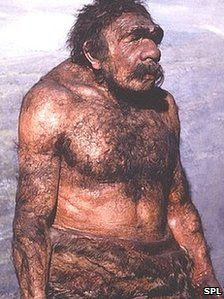